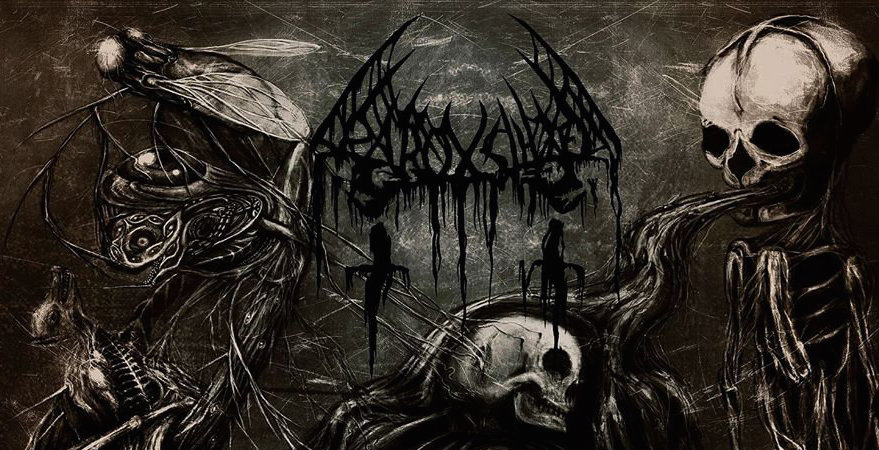 Hellthrasher Productions has unleashed dark death metal underground collective Paroxsizhem’s latest release, Abyss of Excruciating Vexes, and this means little-to-nothing for fans of mainstream metal, but underground minions will welcome this news with jubilation. Underground dark death metal fans will love the dissonance and sheer weight of this record. A former Dark Descent Records alum, Paroxsizhem is a band on a mission, and Abyss of Excruciating Vexes presents as some of their most tantalizing work to date, perhaps even better than the material featured on their Dark Descent Records self-titled full-length album many years ago.

Fans of Portal will like the choppy, dissonant chord transitions and shreds on Abyss of Excruciating Vexes. The band don’t just slog through most of the material, featuring a great deal of blastbeat sections and fast shreds, with double-bass kicking and discordant bass adding to the sheer weight of their sound. The guitars are heavy on the darker riffs, and the occasional rung notes on the first three strings add nuance. The bass backs up the drums nicely, although the distorted guitar does mask a whole lot of the bass in the mix. However, there are sections where the discordant bass is allowed some time to stand out, and mostly, playing in unison with the rest of the instruments, the bass contributes to the wall of sound nicely.

On an album that defies musical standards by way of dissonance, the solos become even more noteworthy. The lead guitar sounds like a perfect complement to the abrasive, discordant rhythms, and it brings reinforcement to the anti-technical nature of the songwriting style here. Equally impressive in LP format as it is on digital, any format Abyss of Excruciating Vexes manifests in is recommended. Abyss of Excruciating Vexes sounds like the most brutal and intense material Paroxsizhem has released in its career, and we at Cvlt Nation only find it fitting to feature here. Paroxsizhem descends upon a crowd of spectators like a force-five funnel cloud in the middle of a small town. It should come as no surprise to Cvlt Nation fans and Paroxsizhem fans that playing this record literally means that destruction is imminent.

Rancor and quiescence are two different things, as are melody and dissonance, technical and anti-technical music, but Paroxsizhem merge two disparate worlds into one cohesive sound on record, and their music never fails to impress. If bands like Portal and Howls of Ebb tickle your taste buds for the bitter taste of wormwood, you’ll enjoy the brew presented on Abyss of Excruciating Vexes.

For some tracks, the slower tempos make their way sparingly, and mostly, the band blast at more intense sections. The laws of nature dictate that Paroxsizhem’s drummer be given adequate rest in between blast sections, and these intermissions often utilize double-bass kicking and slow, tepid snare hits. The lead guitar sometimes accentuates the rhythm guitar, playing slow wailing notes besides the occasional screech with the whammy bar. The band mixes tempos well, in a clear display of nuanced songwriting, while the production captures the performances at their creative peak throughout the record.

Highlight tracks are hard to select. The songs aren’t catchy as one might expect from the style of the band’s music. All tracks bubble like they’ve been in a soup pan on the stove on high after five minutes, and all tracks welcome the chance to slay your ears and preconceived notions about what dark death metal is supposed to sound like. Dark, demented, but beautiful as art, Abyss of Excruciating Vexes still presents as acquired taste, the sort of which Cvlt Nation fans hold in their hearts and cherish.

The record’s other notable traits must include the killer cover art, besides the occasional spoken word samples that suggest a love for all things psychopathic in nature.

Only five tracks long but nonetheless essential for fans of dark death metal, Abyss of Excruciating Vexes holds the banner high for Hellthrasher Productions. So, support this worthwhile effort and enjoy the record to the chagrin of your next-door neighbors. This is one hell of a force-five tornado emanating from your speakers. Enjoy and destroy, lovers of the cvlt!