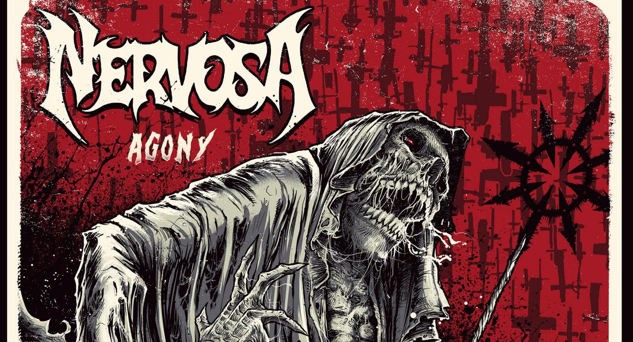 Nervosa is a thrash metal band from Brazil, and the band’s second full-length album, Agony, is being released this year by Napalm Records. Brazil has a storied thrash tradition, starting with death/thrash progenitors Sarcofago and Vulcano, as well as with 90’s powerhouse Sepultura. Nervosa are a confident-sounding threepiece that play thermonuclear-riffed thrash metal that spans the gamut in tempos. Their sound is a bit more of a crossover between modern chugging power metal and old school death-thrash. They may spark a debate on which band best to be compared to, but one thing’s for sure – their addictive brand of metal is perfect for any fan looking for catchy riffs that are easy to headbang to.

Agony is a fun ride through the heavy side. The vocals are great here, sounding like a cross between conventional thrash, death growling, and high-pitched screeching. The guitars are shoved in front of the mix and the snare drums do sound somewhat inundated, but the production allows for the double-bass kicks and the tom hits to be heard during the fill-ins. The bass backs up the guitars nicely and makes a nice partner to the beats, adding a burgeoning weight to the rhythm section.

Left without the guitar, the kit-bashing during fills can be furious, and the drums come alive when the guitars aren’t around to overwhelm the mix. Highly competent performances abound here, and vigor and energy never once lack throughout the album’s runtime.

There’s not much lead guitar on Agony, which may sound peculiar for a thrash album, but somehow the absence of frenetic lead-play isn’t going to be missed too badly by listeners. There’s heavy chugging riffs and speedy shreds. The riffs are never too complicated, and the band are obviously more concerned about playing devastating groove and mosh-ready choruses than inviting air-guitar from audiences that tend to stare during lead guitar play. Track six, “Failed System,” does feature a lead part to break things up a bit. The vocalist enunciates the lyrics clearly enough for thrash fans to shout along. The songwriting isn’t too complex here as well. The band mixes up the tempos and the chorus always sticks out. More importantly, the band doesn’t play power ballads or slows down to the chagrin of the band’s live audiences. A legitimate full-length album, there are twelve songs here, and never do any songs lack in energy and conviction. Track eight, “Surrounded By Serpents,” starts off with a snake charmer lead before the band diversify the song structure with a kit-bashing, string-slashing ride through the paces.

To make matters more tantalizing for the modern thrash enthusiasts reading this review, the cover art proves quite fetching as well. It’s hard to pick highlight tracks here as all songs do generally entertain sufficiently, and there’s no one track that sticks out as if to say that the rest of the material would pale in comparison by a great deal. Track nine, “Cyberwar,” features the band gang-shouting amidst a frantic array of catchy thrash shredding that never lets up. Another brief use of the lead guitar is used to mix things up on the track.

So, support Nervosa now! Sort of a cross between punked thrash pace noisemakers Noisem and Burn My Eyes-era Machine Head, Nervosa is a promising band that we at Cvlt Nation hope will release more quality records in years to come. The Sao Paulo trio will greatly appreciate the support of thrash fans thirsty for new blood. Uptempo and sure to make the heart race, much like a swim in the Amazon while being chased by piranhas, Nervosa’s Agony also features a surprise vocal style for track twelve, entitled “Wayfarer,” where vocalist Fernanda Lira channels her inner Aretha Franklin. It’s a nice touch, in spite of it being quite unexpected, and all that matters here is that for twelve full tracks these ladies kick your butt only to surprise you with a very nice vocal performance to cap things off.