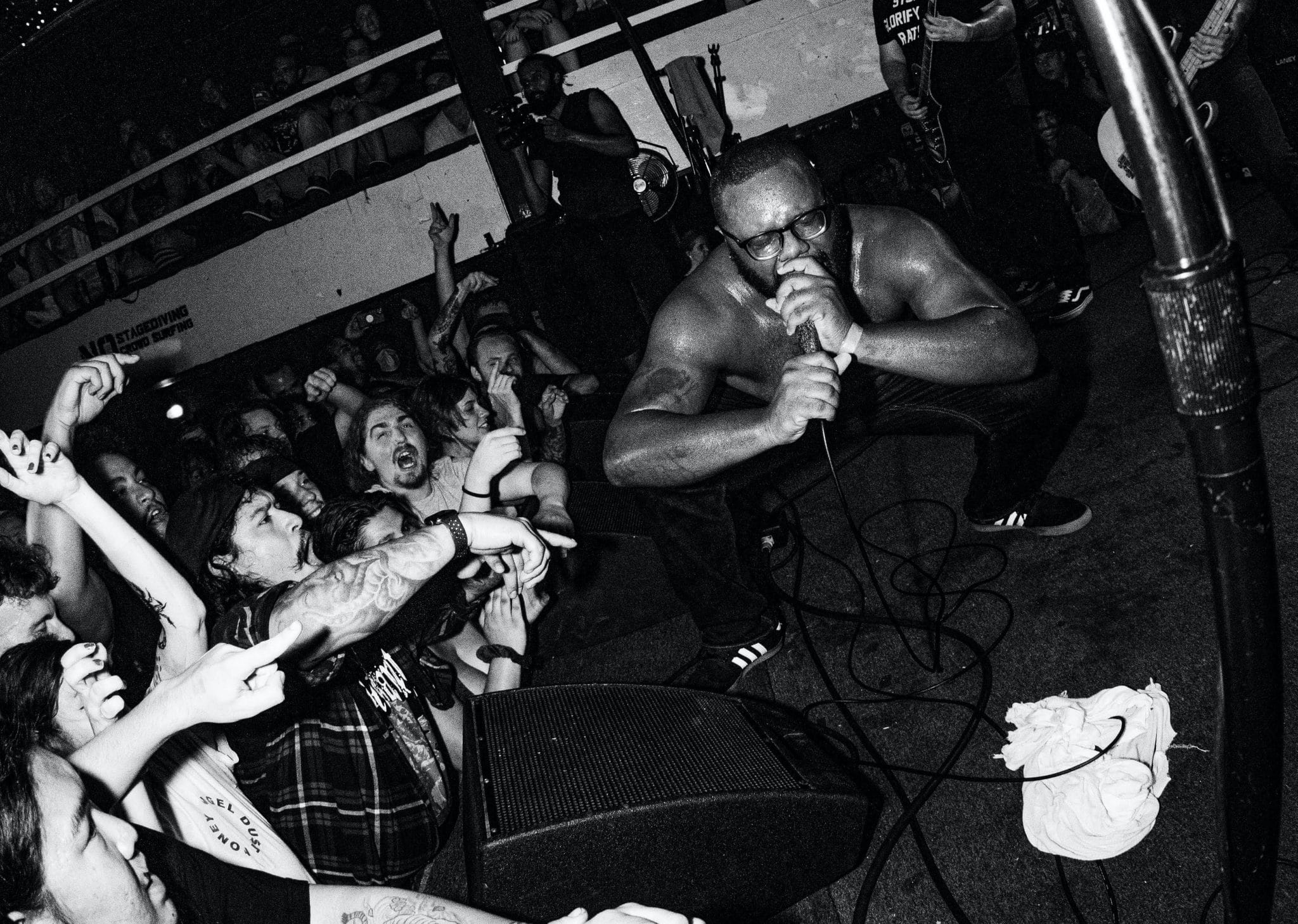 Photo by by Sean Reilly

Tap IN! END IT IG – Linktree

What does a beautiful day look like to y’all?

A breezy 55-60 degree day with cloud coverage, preferably near a body of water, about two hours after I’ve had a cup of coffee and eaten an edible.

How old were you when you first realized that the police weren’t looking to serve or protect you, but instead they were an occupying force?

I was 5 years old and placed on my knees with my hands behind my head in the upper parking lot of Golden Ring Mall. They said they were undercover, but idk. All I gained from the interaction was the knowledge that you could easily say you’re the police as long as you have a gun and sell the role properly.  I realized they weren’t looking to protect or serve and were an occupying force when I learned about the Gestapo and saw those same actions being played out in Baltimore daily, so this was late 1999.

Hold on long enough to play a show or go on tour so I can drop out of real life and go feral for a couple days. Others in the band exercise or stay focused on other parts of the band, like writing the riffs or making the merch. If there was anything I consistently do to keep my mental health up, it’s doing what I want when I want. It bites me in the ass sometimes, but more often than not, I end up with a fun anecdote.

END IT’s creative vision shows a strong sense of self. What experiences helped to shape your lyrical and musical direction?

My father was the black sheep of his generation and was in middle school when the schools integrated. I wholeheartedly believe that I can do whatever I want because if he can live through two marriages, race riots, watching friends and co-workers die while working at a steel mill for 30 years, raising children, and avoiding the bookings, you can’t tell me shit about dick. The downside to all of that is I was put on to very esoteric thoughts early in life, making it very difficult to give a fuck most days, which caused me to do all types of crazy shit in my youth in hopes of passively dying. So long story short, depression. The answer is depression.

When will we hear an END IT full-length?

We’re working on the full length currently. We gotta wait for this next EP to drop first though. It’s at the vinyl plant in line to be pressed. I’d say early 2024.

I love the song “HTF” — can y’all break down this song for us? The “head on a swivel” lyric is sick!

Thank you! That song is about this giant Baby Huey motherfucker who used to hang out and get drunk and be abrasive all the time. I got some info he was saying some racist shit from a friend of mine, and I saw him out in public. I asked him to vacate the premises cause we were cleaning up after a show we had booked, and he wasn’t being compliant, so I three-pieced him. Tried to take his head off his shoulders.  I got a big chip on my shoulder when people bully the environments they inhabit because they’re of larger stature. That’s that jailhouse mentality and I make a concerted effort not to end up in jail, so I’m not tolerating that shit uptown. It’s toxic, and I’ll grow up one day, but not today.

Talk to us about the love and unity that exists in the Baltimore Hardcore Scene? What does the Hardcore community mean to y’all?

Locals can do whatever they want. Outsiders better be respectful before we get disrespectful. There are no crews. There are no gangs. Hardcore is one of the most important aspects of my life. Shout out the BCHC. (Baltimore City Hard Core)

If END IT could develop your own curriculum for the Baltimore School District that focused on Our-story not His-story, what kind of classes would you include and why?

I’d keep the classes that allow personal expression and remove classes that only sell the American propaganda and replace them with more trade-focused classes and teach the children to be more self-reliant. We gotta detach from looking to the Gov’t for assistance and learn to trust the people to our left and right. I’m speaking from a position of privilege, because my peoples been telling me about the struggle and the beauty of being Black my entire life.

Only solution I see is reparations and secession that gives half the country to the bloodlines of formerly enslaved people. Then you’re free to make whatever decisions you want. Hopefully, you’ve been prepared.

I’d put “Apolitical” in the time capsule because we’ve hopefully disbanded the two-party system by then. The next song would be “Wishlist” just to see if I found freedom or peace yet. Last song would be “Lifer” cause I wrote that at a time when I was really out here.

What was the moment when you knew that END IT was going to be a band? Why the name END IT?

The name End It came from the End It EP from the original Hatecore band Neglect. That’s where I get my major influence of writing about my want to kill myself. They did it first and better, if I’m honest. We knew End It was going to be a band after I came to the first practice and wrote “Vas a morir” in like 20 minutes.

How did y’all link up with Flatspot Records?

Akil used to live with Che who runs Flatspot. Che actually hooked Akil up with the original line up of End It after watching him perform with his old band Malicious Code.

Is there anything y’all want to say about END IT and/or y’alls music that you have never been asked before?

If you do decide that killing yourself is your only option, I hope you find what you’re looking for.