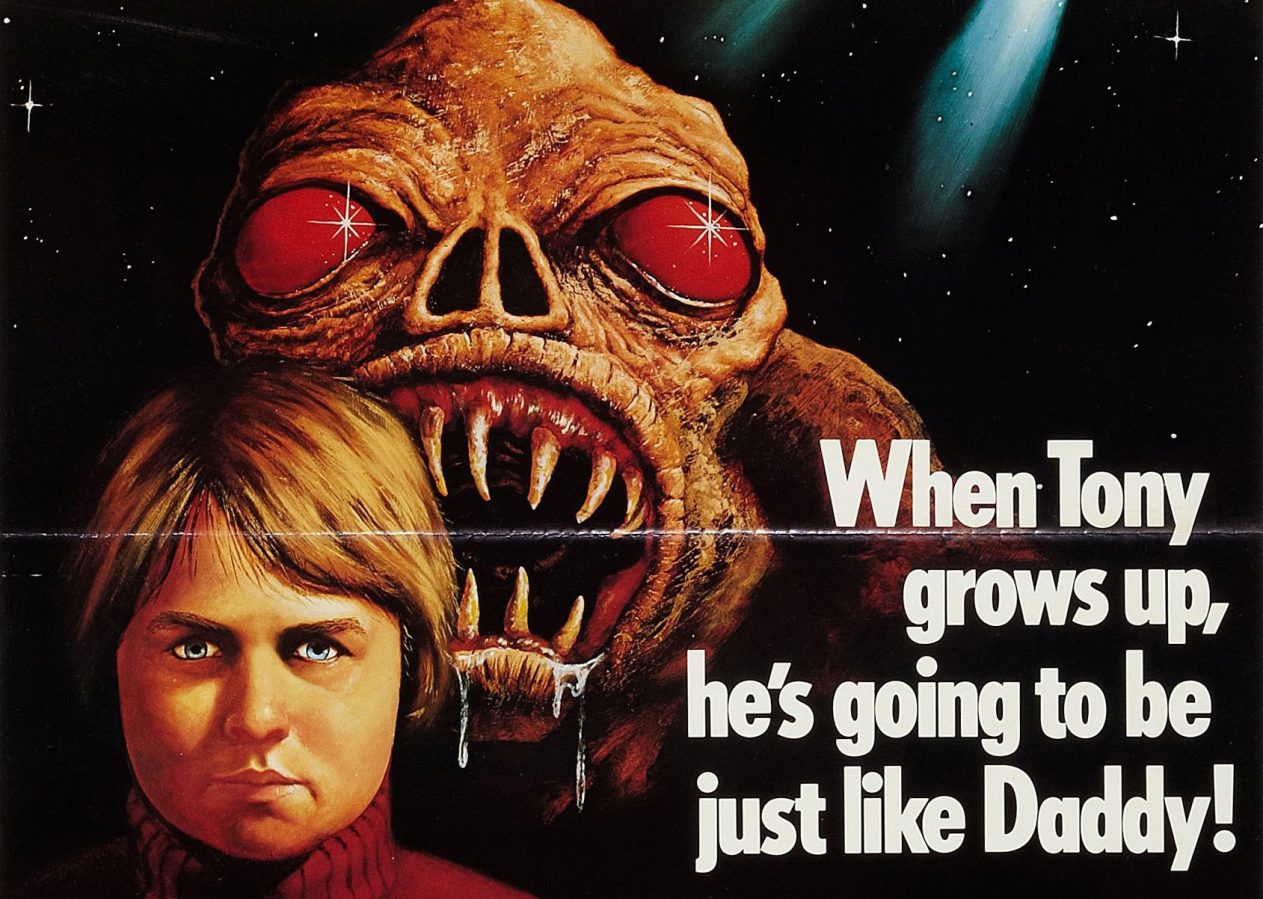 This past week was the annual “80’s Horror Week” (January 13th-19th) amongst the Instagram community and together, me and my horror friends celebrated films exclusively from the 1980’s. This year I decided to go with films that I loved but haven’t seen much, leaning heavy on the weird and wacky side. So here’s my list of films I watched, and a little reaction to each one.

What other movie are you going to get weird, satanic rituals, glowing green eyes, and little, ugly creatures covered in snot? There’s obnoxious college students, beer and parties, and like I said, plenty of occult strangeness to go around. I don’t know what they were thinking when they made this film, but it’s so dumb and fun you can’t help but love every second of it.

In this one, you have a “gang” in L.A. terrorizing the new family that moves into an abandoned mansion, angry because they’ve gotten kicked out of their squat. This is the kind of movie gang that was only in existence in the 80’s. You know the kind: bright clothes, bratty kids, dangerous and violent but looking like they stepped out of a Saturday Morning cartoon. Anyway, they picked the wrong house and the wrong family, because the mansion is haunted by the ghost of an ancestor of the family, and he doesn’t like when people try to bully his people. This is a unique and weird gem, one to be on the lookout for. It’s pure 80’s.

I’m not even going to try and explain this one. A little girl is with her mother at a cemetery when said little girl gets upset and runs into a crypt only to be possessed by some sort of demon that makes her eyes glow green (a common thing, in the 80’s). Later, she grows up and kills a bunch of people just because…I dunno, she’s evil. Anyway, lots of naked breasts, lots of gore, and plenty of fun. This is one where you hang up your brain and just enjoy the ride. You’ll know by now if this is the kind of cheese that makes your pizza or not.

So this one is a fan favorite and I remember liking it but not loving it, and my initial reaction holds true. First off, it’s just too silly for me (and yes, I know how that sounds, given what you’ve already just read) and it drags on a bit long. There are gags in the movie just for the gag’s sake (the little kid running around with the demon hand on his back, for instance). What I will say is this: House is a marvel of practical FX and body suits. It’s also a lot of fun. It’s just maybe a little too PG-13 for my tastes. Still, they kill it on the visual front.

This is the High Priest of Weird 80’s Films. You’ve got aliens kidnapping a man, the aliens returning years later and dumping off a dog-like alien creature that promptly stabs a man below his eyes with two proboscis appendages, kills a woman, and then assaults and mouth-rapes another woman minutes later, making her instantly pregnant to the point that she gives birth to a full-grown man seconds after this, and that man she gives birth to is the fellow kidnapped at the very beginning of the film! And that’s all in the first 20 minutes. What follows has to be seen to be believed. This movie somehow manages to be a staid English flick one minute and an excruciatingly wet exploitation horror film the next. Must be seen to be believed. And I haven’t even mentioned the toy soldier and the dwarf yet.

It’s the 80’s so I had to throw a Slasher pic in the mix. This one was made by the guy who brought the world Squirm and Blue Sunshine and those are two excellent, off-beat films. He repeats the same feat with this one. It’s a typical story: group of young people go into the woods and get menaced by a killer. The bad guy in this one is short of a brain and can’t breathe well, but he’s a mountainous man who kills with impunity. Not much gore here, and it tends to be more old-school stalk and menace, but the ending more than makes up for it. How our Final Girl dispatches the menacing evil is quite unique, and I won’t spoil it here. A good one for a late Friday night.

So this one has it all and is the quintessential 80’s Horror/Cult film. I cannot recommend it more highly. You’ve got teens in trouble, boobs, gory kills, and robots that shoot lasers chasing people around. The mall setting just solidifies its place in cultural history. Goofy, yes, fun, yes, absolutely insane, yes. Also: guns that never run out of bullets, another 80’s film staple. This is the kind of movie that begs for pizza and beer and popcorn and lots of company. A Midnight Movie Masterpiece.

I ended the run with a more old-fashioned film, one where the echoes of the 70’s could still be heard down its narrow, mineshaft walls. The Boogens is about a company unblocking an old mine and unleashing a group of weird, turtle-like creatures that crave human blood. Or something like that. We have adult characters who act like horny teens and we’re actually given enough time with them to care about what happens to them. The body count is low by 80’s standards, but the little booger-monsters are cool as hell and the movie really lets rip when it needs to. An artifact of its times but one that is vastly underrated. Plus, you get a poodle named Tiger.

The 80’s were, in my mind, the finest decade for celluloid Horror. My favorite decade will always be the 70’s, but the 80’s brought us the explosion of VHS tape rentals and so, so many theatrical releases. The genre saturated the market in blood and practical FX and nudity and who could be upset with that (besides, uh, many, many parents)? It was a constant parade of weirdness and fun and blood, all three crucial ingredients for a good time.

What are some of your picks for weird, offbeat, and terrifying 80’s Horror films?