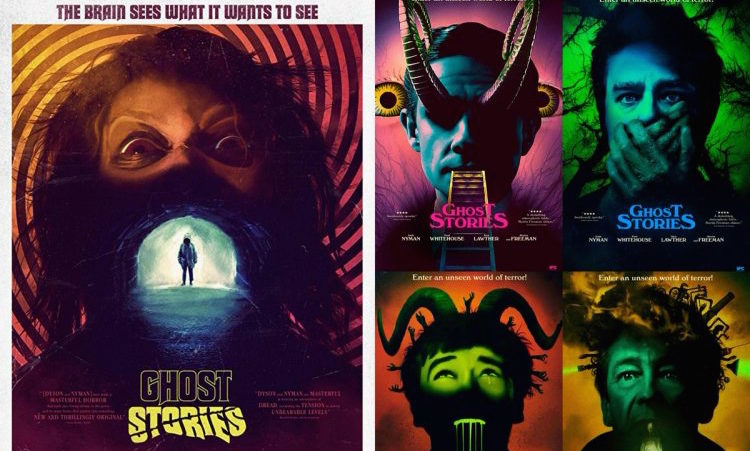 2018 offered a lot of great Horror for the world. There was the much-loved and praised Hereditary (overrated, in my eyes, but still good) and A Quiet Place, as well as the return of a couple of franchises that needed rebooting (Halloween and Predator) and a whole host of other fun flicks and turdly turds to go around. Here’s five movies you may have missed that I found delightful in various ways.

This one is pretty much like its title suggests. It’s a series of ghost stories, linked together by the story of a professional debunker trying to disprove the supernatural while at the same time having to confront something very personal and profound from his own past. I won’t say this is a “gentle” movie, but it kind of is. Not a lot of gore but instead it’s heavy on atmosphere and creepiness. Ghost Stories takes a minute to sink in but once it has you in its icy clutches, you’re doomed. Witch in the Window

This is another quiet film and a very personal one at that. The story of a troubled relationship between a father and a son, for much of its running time it’s pretty much down to the two lead actors and their dealings with one another as they fix up an old house to resell. While this might sound boring or “movie of the week,” it’s actually quite compelling. Add in a large dash of haunting (a witch used to live in the house the family is refurbishing and reappears, sitting in said title window, and is creepy as hell) and a couple of genuinely frightening scares, and you’ve got the recipe for a winner. This one doesn’t beat you over the head; it’s a patient film, but it rewards the viewer many times over. Okay, here we have an Indonesian horror film that leans on Islamic superstition and, for my money, beats Hereditary at every turn. They share very similar stories (spoiler alert) about doomed children promised to weird demons but Satan’s Slaves gets right to it, with that awful, jangling, ringing bell, apparitions, and a spiraling sense of damnation. Hereditary is the bloated cousin to this sleek, mean, muscled machine. Not only do you get a glimpse into a different (for most viewers) religious world, you also get your socks scared off you at the same time. What a bargain! The scariest movie of the year, hands down. Something is haunting a small neighborhood in a city in Argentina, and the terrors it brings are horrifying. You won’t forget that discomfiting little boy that sits at the kitchen table in one house. And don’t even get me started on that thing in the closet. Practical effects, you get gore like the 80’s never ended, and chilling setpieces to rival anything you’ve ever seen in a ghost film before. There were a couple scenes that made me wince and a couple more that had me screaming. Sure, it’s a bit disjointed and plays more like a fractured nightmare than an actual, through-line narrative, but that’s what gives this film a good deal of its power. This movie is out of control and you’re tossed into the middle of it. Good luck surviving this nightmare. Assassination Nation
Probably a controversial choice but I don’t care. If you consider The Purge films horror, then you have to consider this film as horror, too. Just watch that terrifying home invasion scene and tell me this isn’t horror. And don’t get me started on the mounting paranoia and the spiraling darkness that sweeps over the entire town and cast of the story. Someone has hacked everyone’s private computer info in the small, American town of Salem, and they’re dumping it out for everyone to see. Lives are ruined, lies are exposed, and even worse, truths are told. The town tears itself apart, eventually focusing its vicious anger on a group of four teens who had absolutely nothing to do with any of it. Very political, very salient to our times, this film will stomp on any notion of human decency you might still believe in. There’s nothing more horrifying than what each of us are hiding in our hearts, and in Assassination Nation, nothing gets held back. Honorable mention: Revenge, a rape/revenge flick that turns that whole subgenre on its head. Gory and subversive, don’t miss it.