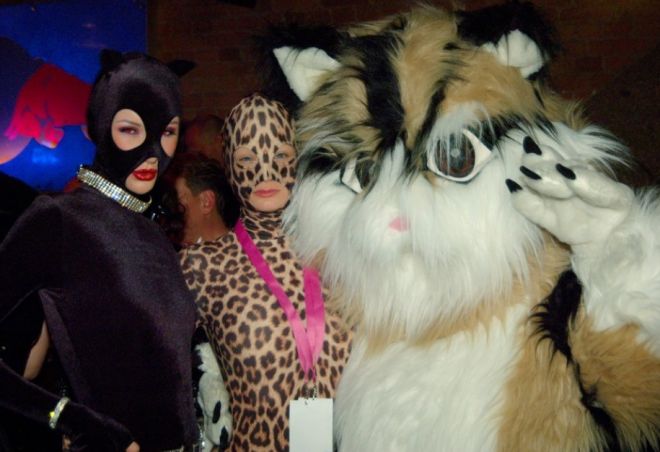 We will skip the first 120 Days in Sodom, and focus on 121st, which found me back at Frolicon – the south east’s largest kink convention. My first 120 were spent getting my toes back into the kink community after my divorce, so Frolicon was full submersion. The landscape of the kink scene had changed a little in the past five years, during which I had become less active due to my ex’s shift to vanilla over the course of our relationship. So I began reacquainting myself with people on Fetlife and dabbling in the dating pool with more muggle sites like Tinder. This lead to me meeting someone who I began introducing to the lifestyle slowly. This gave me more confidence to take the plunge back into the sensory overload that is Frolicon. I see Frolicon as my chance to give back to the kink community and work part of the weekend overseeing the Art Show and acting as security in the dungeons. So I arrived at the Sheraton in downtown Atlanta at 10:00 am on Friday morning to go over the rules with new dungeon monitors. My friend Frisky coordinates the dungeons, and I am his right hand man, being most experienced in this regard. The dungeons at Frolicon are sex positive, although any penetration requires a barrier and equipment must be properly covered to prevent the spread of bodily fluids. Over the course of the weekend, I did have to apply first aid to a few nicks here and there, but no major injuries occurred in the dungeons – though I can’t say what occurred in people’s hotel rooms. 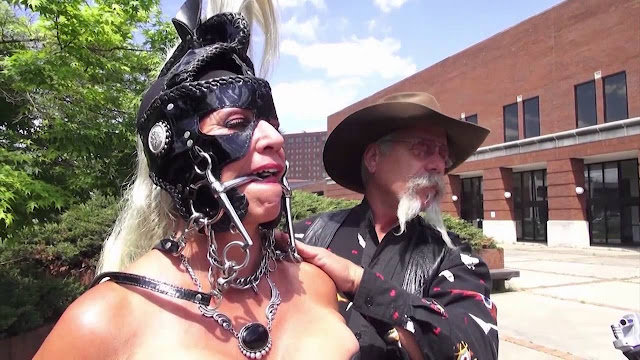 I had a vanilla friend tagging along for the first half of the day who was writing a book and wanted to get a taste of the lifestyle, though who also typically finds it a little scary. After this meeting, we then went to a panel on negotiating safety with new partners. It was a academic look at this with a power point presentation to go along with it – my friend, who is a professor, found this fascinating, though my person of significance said sounded like the most boring thing ever. I guess split the difference. While I have gotten tested on a regular basis, as I hate condoms, being in a monogamous relationship for several years kinda put this issue out of my head, so it was good to be reminded how the web of risk extends in an open or poly relationship as strangers with their own histories are introduced. We broke off into groups and role-played. I was in a group with four people, so I took control as always and turned it into a scene where we were meeting each other off of Fet-life to form a poly-play family.

After this, my friend left, and I returned to the dungeon to monitor a party thrown by the photo-staff, a group of voyeurs who took pictures for those who wanted their scenes committed to pixelation. The host of this party put on Crowded House, which began receiving complaints of not being music for a dungeon, so I took control as the DJ. I started off with Ministry, then went with what readers here would expect: a mix of Depeche Mode, David Bowie, Cocteau Twins, Type O Negative, the Cure, Peter Murphy, Rasputina, the Weeknd and Zola Jesus. There was a consensual non-consent scene that flowed really well and was the best of the morning. From there, I had an hour to kill before going to my shift at the art gallery, so I grabbed a snack and went to a writing panel on self-publishing.

After my shift at the art gallery, I went to karaoke and sang “Let’s Dance” by David Bowie. By this time, the evening was well underway, and the effects of alcohol on those in attendance was noted. Being in recovery, by the second time someone offered me alcohol and drugs it was my cue to hop on mass transit and head home for the night. It was pretty high stimulus, which was a lot to process leaving me keyed up, triggered and anxious – which was not a good combination for me personally – so if you are also in recovery and attending a similar convention, it’s good to have a contingency plan in place. 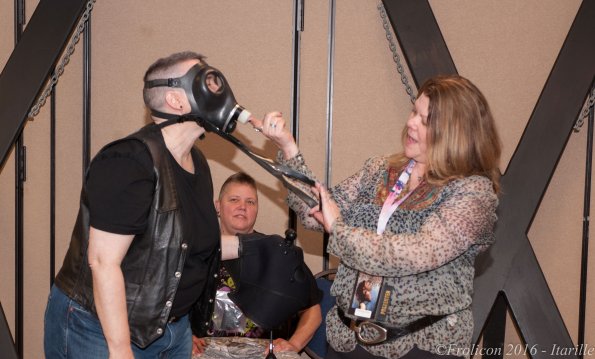 The second day found me up at 9 am and heading back. At 11 am I had a guy on guy party to monitor. I consider myself straight but narrow, and while it was too early in the morning to take the gay porn projected on the wall that I kept my back to, the actual physical interaction taking place was well planned and pretty passionate, so I had much more appreciation for it. I don’t care what you are into, as long as you are passionate about it. I hate seeing someone being flogged by someone who looks like they are dusting their grandmother’s antique furniture. There was a really well coordinated rope scene that was the best of this party. The only person I ran a scene with over the course of the weekend came from this party. A submissive man his early forties, who was just getting into kink and had never been flogged before. He approached me, as he felt hesitant to jump in with others and felt like an outsider. So after explaining to him I have a heavy hand so I would flog him if we could not find someone who might provide a gentler introduction, I gave him what he called the most intense three minutes he can remember before he invoked his safe word. It felt good to break my flogger back in for the first time in three years.

Strangely, all three of the women who I met with whom I had an intention of playing or more personal interactions were Korean. So I asked the one that I left the dungeon with Saturday night, what is up with all the kinky Korean girls, and her reply was:

“My mom is a loon and we were raised culturally submissive. Sex is frowned upon. We are not meant to enjoy it and it is portrayed as such in a lot of our television and movies. So we are groomed to fetishize rape and submission. Every guy who I am talking to right now is trying to fuck me because I am Asian. So really, that fetish sort of swings both ways, sir.” 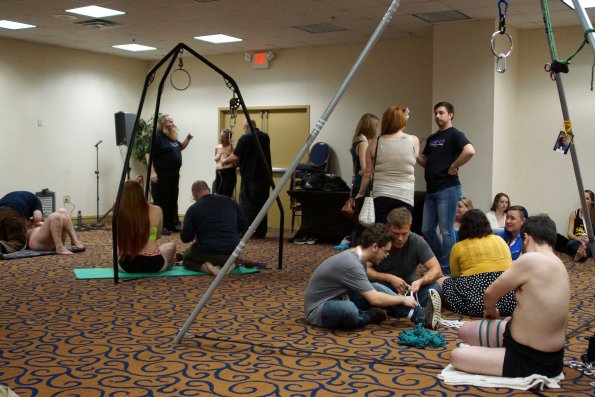 I found her perspective interesting amid this hedonist celebration. In the Bible Belt, a large percent of those in attendance might have had similar repressive backgrounds. My further interactions with this young lady, who proved to be very witty and genuine, were only to go so far. It did also open the door to becoming more active in BDSM, while helping me sort some things out in my head that were shuffled around in the few days surrounding this weekend. This weekend also served as a good transition for me back into the community where I belong. Kink-minded individuals in the Southeast should mark their calendars for Frolicon’s return next May.