Italy’s Dystopian Society, like Germany’s Tanzkommando Untergang, employ imagery and use a name that might make one think they were a political thrash band. But — wait just a minute! Although the band do have a strong sense of political ethics, they’re like New Model Army and Rubella Ballet in that they couple social observations with a compellingly gloomy postpunk sound.

They will be playing along with The Mob and UK Decay at this year’s Drop Dead Fest, on November 3rd, in Berlin, Germany. (Info below.)

Dystopian Society’s new LP, Cages, is much in line with this. It is basically a political deathrock LP — if such a thing could be permitted to exist under the heavens — much like Christ vs Warhol’s excellent Dissent LP married the sounds of postpunk and deathrock with astute political observations, including an anti-Tea Party song in the latter’s case!

Dystopian Society were originally interviewed by Oliver in May, 2012.

Dystopian Society’s Cages is one of the best purist deathrock LPs of 2012 I have heard. This power trio bring on old school dathrock solidly in the vein of early, Rikk Agnew-powered Christian Death, or Voodoo Church, or the Superheroines. Along with Blue Cross, Tanzkommando Untergang, and Arctic Flowers, they point the way forward for dark gothy postpunk. Dystopian Society’s 2012 Cages LP is highly recommended. Although the members are from Italy, they sing in English. The liner notes and lyrics reveal that there is a real intelligence behind the band; none of the songs are stereotypical “graveyards and bats” fare, althoug the atmosphrics are suitably gloomy.

As the interview with singer Max Skam and guitarist Sara Red Hexe shows below, the goth-punk scene in Italy, as in much of Europe, is characterized by playing at squats, self-managed social centers, and other institutions of alternative political culture that simply have no parallel in the US, where being into underground music can be neatly divorced from anything political. Regardless of one’s political stance, Dystopian Society make an extremely potent type of gloomy postpunk that incorporates (to my ears) the influences of Paralisis Permanente, Christian Death, and Shadow Project.

You can buy their killer new album/CD, Cages, here!

Oliver: So, first thing’s first — how long have Dystopian Society been around, who is in the band currently, and what instruments do they play?

MAX: Dystopian Society are around since the end of 2010; me and Sara were playing already together but never released anything because we felt the need to have a drummer. Finally we found the right person at a party we were organizing in a squat in Florence, and so here’s the original and current line-up: Max Skam on bass and vocals, Sara Red Hexe on guitar and Mariglen on drums.

Oliver: Who came up with the name “Dystopian Society” and what is it supposed to mean?

Max: I had in mind to choose this name for a project for a long time. I’ve always been obsessed with dystopian books and movies and found more and more analogies with the actual models of societies we are forced to live in. When I proposed it as the name of the band, the others immediately agreed. We felt it was perfect to describe the situation of our country, dealing with mass-media propaganda, repression, discrimination, and underlying modern fascism. Of course the meaning of the name is wider than that; savage capitalism all over the world can be much more totalitarian than people think.

Oliver: For someone who has never heard Dystopian Society, how would you describe your sound? In other words, what would you say you all sounded like?

Max Skam: Our sound can be described as a gloomy and rough mix of punk and goth, with some hardcore punk influences. This seemed to us the perfect sound to describe the loss of hope and, at the same time, the rage of our lyrics.

Oliver: What bands’ sounds went into influencing Dystopian Society? Also, as far as lyrics, who has influenced you all the most? You have done cover songs of Paralisis Permanente, but are bands like The Mob or Killing Joke really your main influences?

Max Skam: We love all the bands you mentioned, but it is really difficult for us to make a full influences list; we could include bands like old Christian Death, Dead Kennedys, Killing Joke, Theatre of Hate and some of old-school anarcho-punk. Anyway, we did not calculate to sound like other bands, even if it is clear enough what we like most we prefer the listener to make the comparisons. When we make music, we try to sound like Dystopian Society. Same reasoning can apply to our lyrics.

SARA: (laugh) Yes, I got your point, Oliver.. we made a song, “Masquerade,” talking about scene stereotypes. In our lyrics we try to talk about all the bad aspects of modern societies, like war, marginalization, isolation, insanity, loss of individual freedom, earth exploitation, class-ism, repression and so on, along with celebrating the purity of so-called “losers” and people who have been labeled as “dangerous” because of the way they act or think. We find all this “political” because it’s the system that created all these side effects. We all have the power to change this and make the world a better place, but first we need to be aware!

Oliver: Italy was recently rocked by a lot of scandals involving Silvio Berlusconi and his “bunga bunga” parties. These are very sensationalistic news stories, but do you think they are distractions for the public, when larger economic issues, about austerity cutbacks in programs for the poor, the recession, and the crises of capitalism are ongoing and more important?

Max Skam: It is not as simple as that; the scandals you talk about have been useful to awake some people from their numbness, so it is not negative on the whole that they came out. Unfortunately there are still lots of people who exalt this kind of sexist behavior based on male supremacy.

Despite his lifestyle, Berlusconi’s regime was totally supported by most of the political, economical, financial and religious powers, even by the Vatican. They used his power to bring us to the condition they had already decided for us: a classist society, with the destruction of workers rights, crisis, unemployment, limited freedom of speech and, generally, loss of hope in the future. Everything has been done to control us more and more. Consequently, we could say that this kind of disguised democracy anticipated the effects of the worldwide crisis of capitalism.

Oliver: Italy has a very strong history of communism, council communism, Marxists like Antonio Gramsci, but also of producing a very militant anarchist movement, like Errico Malatesta and others. Is this a tradition that you feel Dystopian Society belongs to, ideologically? Why or why not?

Max Skam: We strongly respect everyone who has fought for freedom and equality of peoples; both Gramsci and Malatesta, in their different ways, have dedicated their lives to these issues in a very difficult historical period for Italy. In this sense, we can say we feel close to both of them.

As for today, we think that we have to run back to the “revolutionary ideal,” rejecting corporate economic interests of any kind that are guilty in spreading poverty and disparity, because to us it is the only way to survive and obtain something really close to Freedom.

Oliver: Where can folks buy your records online? Also, do you plan to tour Europe or maybe even North America some day?

Max Skam: You can find our self-produced album Cages in pre-listening on here:

It will be available both in digital download or physical copy and will be distributed in Europe by afmusic.de from june 8th, otherwise you can contact us directly at dystopiansociety@rocketmail.com.

We would love to tour Europe and North America one day but as for now, we haven’t got anything planned…let’s see what future holds for us!

Oliver: What is “The Egregor”? I’ve wondered who is behind the Facebook page and if it is a collective, a zine, or….?

MAX: The Egregor does not exist in a definite form; it’s a mind collective group composed by people who do not necessarily know each other but nevertheless started to follow the original spirit of positive punk and anarcho-punk. We found many people who were really tired about how fashion and superficiality of the recent goth and punk “scene” took over music and ideals and decided to go back to the purity of the origins. The funny thing is that this process happened at the same time, with a lot of new bands coming out from different parts of the world.. well, we hope to see the whole thing getting wider and wider!

Dystopian Society’s Bandcamp page, from which you can buy their CDs, is here: http://dystopiansociety.bandcamp.com/

Dawn of Chaos
A Feature 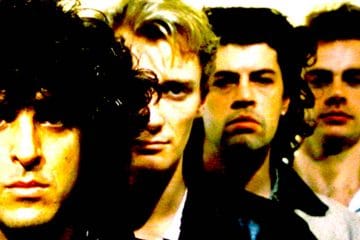 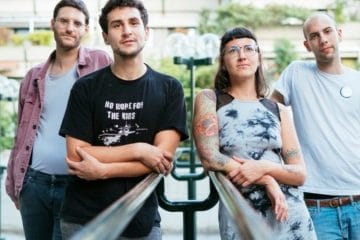