Sean Reveron 2015-05-13
Sean Reveron · May 13, 2015
0 0 5k 0
By John Villegas
Making a name for themselves as the most interesting live band in all of New York City, DAWN OF HUMANS have finally unleashed a proper demonstration of their power for all the world to know. After a demo in 2007 and three 7″s, these freaks drop over 20 minutes of twisted reverberation on Slurping At The Cosmos Spine. In a world where punk continually looks to its past for inspiration and the majority of bands choose imitation over creation, DAWN OF HUMANS stand tall as a true original. The opener, “Comparison Threshold,” introduces the album as a relatively normal rock music, and then as it digresses into “Dug Hole,” the dynamic shifts and burst into something completely different and wonderful. Discordant but striking, the song is as poppy as it is strange. The way the instrumentation drifts away from each other and then pops back into place on “Fixation” makes me think this is what it might sound like if CAPTAIN BEEFHEART started a hardcore punk band. “Focus Bubble” fades into “Fog Sclope,” and both the music and vocals are unhinged in a a beautiful way beyond description.
Label:LA VIDA ES UN MUS DISCOS “Foundation” contains great rhythms that co-mingle with each other in such a way as to almost be confusing, but once you are able to wrap your mind around it, you realize you are hearing one of the best songs on one of the best albums of MMXV. “Horse Blind” sounds like CRISIS trying to figure out Trout Mask Replica, and has me hanging on intently as it scatters into the increasing tempos and tangled melodies of “Mangled Puzzle.” The vocal performance on “Painful Mountain” starts off sounding reminiscent of the great Sakevi Yokoyama, then takes a direction all it’s own and does a back and fourth that creates a great dichotomy that really drives the song.
As “Possibility Box” swells and gains it’s legs, it runs itself directly into a wall and prepares you for the last song of the album, “Secretion/ Grapitudonce Of Hinsenctor.” As the song plows through itself, it starts to fall apart, and as the drums become more sporadic, you expect you are hearing what is the end of the album, until it develops into a whole new idea. The direction it takes introduces what may be the best working of guitar and bass together of the whole album, laid over drums simple yet beckoning that play the album to it’s close. But does it really end there? No, you will be back. Slurping At The Cosmic Spine is without a doubt an album that will pull you back for more, there is just too much to take in for a single listen. From the sewer, like a C.H.U.D., they came; but now that they are here and truly established, they won’t be going anywhere soon. Fuck Wacka, DAWN OF HUMANS for president!
Tags:dawn of humansSlurping At The Cosmic Spine 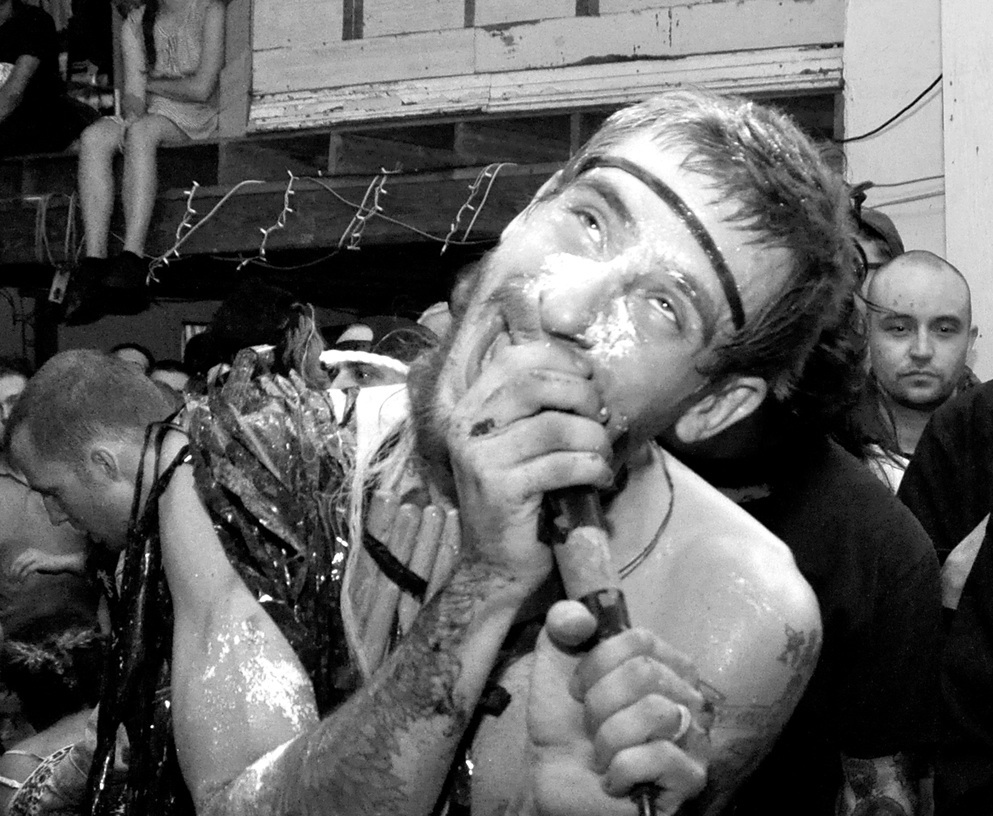