Damn this band fucking rules HARD!!! My bad for not having a full review, but here is what Meghan said when we premiered their video:

If you didn’t get a hard copy of TOKE’s 2017 exhalation Orange on vinyl or cassette, then you are shit outta luck (you can still pick up the digital version here). These guys know how to get stoner heads banging, and that crushing magnetic force is in abundance in their new video for “Weight of the World” off their most recent album. This is a doozy of a record. It’s one of those albums that from the minute I hit play was going to be on my top 10 of 2017 list. Featuring the same unique brand of brooding doom metal that defined Mariner, last years landmark release from Cult Of Luna & Julie Christmas, Never Forever is a helluva musical statement from France’s doom darlings. The resonant frequencies and overwhelmingly slow crush of Monarch is stunning. It crunches forward step by step with waves of distortion crinkling into your ears, tracks like “Song To The Void” delicately unwind themselves in such a way as to prove, inch by booming inch, that Never Forever is a masterful piece of art. Perhaps I’m just a Subrosa nerd, and this record hit my exact set of tastes, but I think it’s a lot more than that. Anyone who spends a significant amount of time with Never Forever will quickly come to realize the depth of the riffs at hand and the overwhelming power and choking majesty of this release. Pinched from Metal Injestion If any band could imbue the concept of infinite Hell with a magical quality it’s these guys. The massive atmosphere they create is untouchable, and today we’re very excited to share the track “Wrath” off the upcoming album. Listening to this track is like having your soul called to the crossroads for reaping, then traversing a fiery path into the depths of Hades, passing writhing souls and towering demon overlords as you make your way to the center of the earth. You sold your soul and it’s fucking rock n’ roll. You can pre-order The Glitter of Infinite Hell right here, which features Hieronymus Bosch’s Christ’s Descent into Hell on the cover and original art by Goatess Doomwych on the inner gatefold. Fost of MINDKULT is a one man DOOM killing machine. His 2017 LP is called Lucifer’s Dream and every moment of it is STELLAR. This dude puts so much soul into his songs. “Take a breath. Drink a beer. Smoke weed. Relax. Drink another beer. Push the volume up. Press play. Explode. Get fuzzed.” These are the words that ATOMIC TRIP live by and for good reason – this band fucking rules! These DOOM warlords have created the Instrumental Doom album of the year entitled Strike #1. Over the course of 40 minutes, this band proves that they can’t be fucked with when it comes to creating riffs that kill on contact. What I love about this record is how they are able to manifest such dynamic songs without using vocals. FOUR (Tie) – BEASTMAKER  Inside the Skull THREE – WITH THE DEAD Love From With The Dead

I feel like a total loser for not having a review of this insanely killer album. That being said we  giving it’s just do by making it our number 3 doom pick of 2017! WITH THE DEAD killed it this year respect due!

I feel like a total loser again for not having a review of this insanely cosmic album. That being said we  giving it’s just do by making it our number 2 doom pick of 2017! UFOMAMMUT melted my brain with this one! 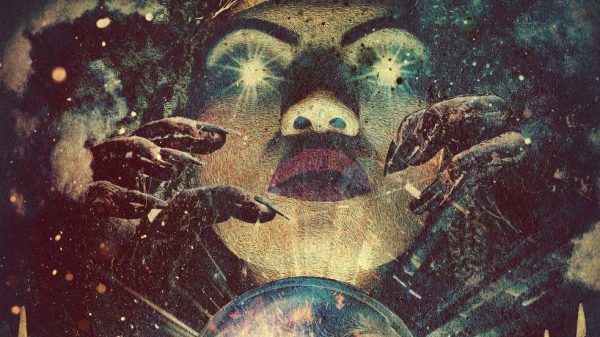