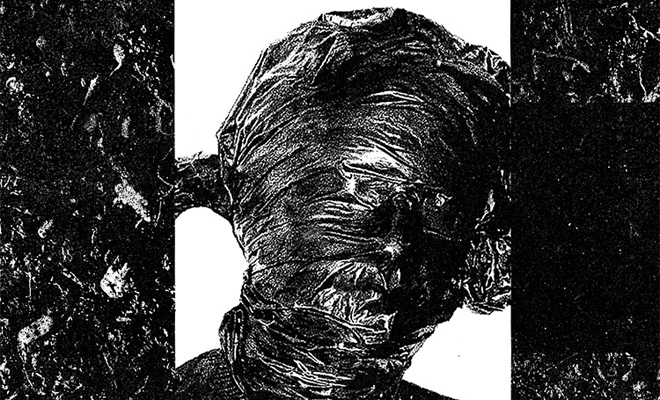 I’m at a loss in how describe this band’s brilliance, because every moment of their album For Want of Feeling alters my state of mind! On many levels, I think that BONE have created a the perfect album. This band’s songs are huge trees of emotion that cast shadows of angular doom. The song “Bath Time” is 8 minutes of sonic bliss, in a murky kind of way. When you hear BONE, you can totally tell that these humans are in tune with their musical vision. Even saying that For Want of Feeling is amazing or incredible would be an understatement. BONE is a band that should be known to all of those beings that dig original underground music. So press play below and then share how you feel about this band with a friend, so that they can hear the magic of BONE as well! Are you ready for some dirty and distorted hardcore? Well CVLT Nation has the answer: QUALM from Amsterdam brings the ruckus!!! Their tape Passive is not passive at all, but actually a sonic punch in the nose! QUALM have that we don’t give a fuck melodic groove happening that I can not get enough of. So fuck the dumb shit, let’s all get aggressive and start blasting Passive! Broken bottles and blood-stained alleys need PISS, and we have it in the form of a kick-out-your-teeth hardcore band from Berlin. This band do not play by the rules, which is why I like them so much. On their tune “Shake Vomit” they spazz out on some shit that sounds sick. The drums on this tape are fucking pounding boulders that I don’t not want to stop! The vocals from PISS are the kind of angst-ridden audio spit that I love to hear in my ears! Press play, take a shit and then let PISS do the rest! Hey you over there, come over here, I heard you were into that freak the fuck out kind of sludge…Well I have what you have been looking for HOLLY HUNT’s new EP Prometheus is the shizz! I must be honest, listening to this band, you might start to feel like your brain is being taken on a trip through the sewers of the lost riff! HOLLY HUNT’s songs are full of perfect sludge-filled moments that when high can act as magic portals into other parts of your imagination! All hail the power of the sludge, because HOLLY HUNT is my new drug! I will not front, because I can’t front – I’m a fiend for some on-point shoegaze, and the other night I found this amazing band called EARTH MOVER. These hazy humans have created a killer bunch of feedback-kissed songs called Winter Introduction. This group is able to take the sound of the past and put it through their creative spirit to come up with something new and spacey. You can hear that these humans are friends and having fun making music together, which only makes me like them more. Blasting EARTH MOVER makes me want to light my bong outside and allow the sun to take me away! I’m so impressed with this band; press play and gaze into the sky until your brain melts…I want to hear so much more from this band!