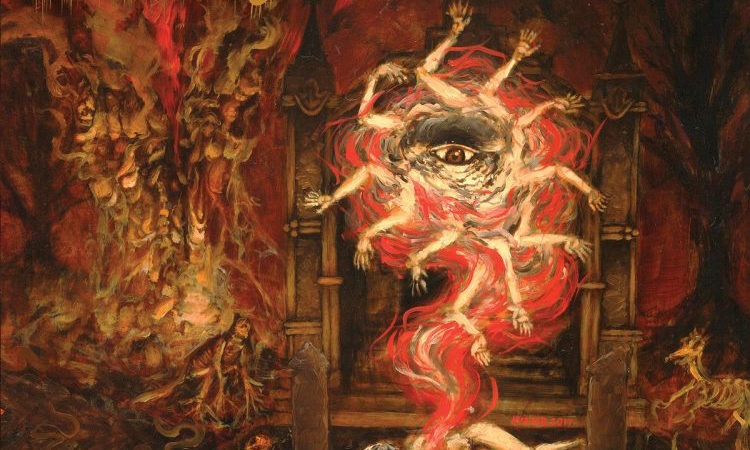 “Akhoman (Spill the Blood)” is my favorite song on the album, as it subtly brings out all the pieces that Dakhma are great at. The beginning of the song presents more rhythmic, almost hypnotic like drum beats until the wall of noise returns, however the guitar tones within the noise shift from furious black metal tremolo picking, to that high gain buzz saw death metal picking. These little shifts in tone make for an amazing sound to those who really pay attention to the rhythm. There are so many sections of this song that cause innate head banging, it is the ritual that these guys conduct coming into full effect. t comes in on a rumbling rattle of drums, hellish guitars bringing discord, slowly marching the listener into the caustic doom that is waiting. Within a minute we are bathed, fully immersed into this journey to the darkest depths of psychotic despair and, uh, Obliteration. This is dirty, extreme, crushing Death Metal. There’s no cruising here, no melodic niceties to smooth things over, this is a fist to your guts, over and over again, with tiny flourishes here and there to remind you what the sunlight looks like, and how you’re never going to feel it on your face, ever again. THREE: Petrification Hollow of the Void

Sentient Ruin Laboratories, Memento Mori, Dawnbreed Records, and To the Death Records are releasing the latest scourge of humanity presented by old-school death metal band, Petrification, called Hollow of the Void. This album marks another journey into subterranean sewage tunnels for the likes of old-school death metal fans, as Petrification’s frantic but mostly controlled guitar attack paced by thudding drumming and deep basso profundo thunder are sure to send fans spelunking into caverns and mineshafts in a prelude to disaster. Why seize the heavens when only light shines brightly in open skies? Take to the darkness and experience the sense and sentience of being buried alive. FOUR: OUR PLACE OF WORSHIP IS SILENCE With Inexorable Suffering

Following on from the introduction is “Chronicles of Annihilation”. The opening is a caustic outburst that is driven by a brutal blast beat, treading the line between death and black metal.  The vocals are delivered with a reverb soaked guttural style.  More Doom/Death than the typically shrill Black metal cries.  This is also the first example of a dense, detailed composition style that O.P.W.I.S have in their tool bag.  I really enjoy the alternate switching between a slow doom-laden groove, before reverting back to full blast territory. Savagery is the word, and Torture Rack are the kings of it. Pounding riffs, putrid vocals, angry drums, and rotting production are what Torture Rack brings to the table, and if you really want, you can stop reading right there and just go listen to the album I’m reviewing; you’ve gotten the gist of it. Ritual Necromancy play extreme metal without holding out on intensity. The frantic arrangements are complementary to the heavy, burgeoning rhythm section and are anchored by downtuned tremolo riffs and sporadic chugging. When they play the tremolo riffs to slower drumming, they bring to mind ferocious flood water breaking through levees. When they do chugging riffs to blistering double bass pedal abuse, they send monoliths cascading down mountains. The vocals are deep bellows of great consternation and violence, like the gods before us aim to eradicate us all. SEVEN: OF FEATHER AND BONE Bestial Hymns Of Perversion

I’m going to wax affectionate here for a second; Of Feather and Bone is fucking amazing. Nary a release of theirs has passed my desk that I’ve not beaten to death with repeat listens. Their previous material straddled and blurred the lines between grindcore, crust and death metal, with only the heaviest flavors of hardcore peppered throughout. From the barbed hardcore found on their debut Adorned in Decay EP to the unhinged grindcore on their first album Embrace the Wretched Flesh, this Denver trio has pushed themselves to monstrous new limits with each release. So many sects of ancient lords have fallen since between Alchemyst and Beyond, with even more falling silent (Pyre, Drowned, Necrovation) and with the spiriting of Zom and Obscure Burial fresh, the return of Abyssous brings hope for the daimon of ancient and deeper occult death metal traditions. The turn on a dime atmospheric old school death metal furor of ‘…Smouldering’ still exists on Abyssous‘ second outing despite having been silent twice as long as they were previously active. Wailing lead guitars and ‘Last One on Earth’ jogging rifts do little to escape the semblance of ‘Mesa’ from the Morbid Angel guided rhythms of their other project Heretic; Yet elastic and rust-scraping atmospheric death metal guitar work creates just enough of a generational separation from old and new that Abyssous appears energized and far more capable than previous. The period of growth in between releases comes with an intense focus upon subterranean angular guitar attack and chasmic bellows in reproach of the waves of thrashing madness of old. The production on this album has such a raw sound without sacrificing the use of their instrumentation. It has been a long time since I have experienced an album with raw production that doesn’t sound like the band is hammering tin cans for drums. I applaud the band for keeping the album’s sound classic yet unrelenting and heavy. Abandon your sub-genre preferences for a second, Cvlt Nation maniacs! Gruesome old-school death metal is here to stay, and Sentient Ruin Laboratories has just released another classic example of the style care of Noose Rot’s EP, The Creeping Unknown. Only four tracks long, the release is fraught with doom downpicks and hardcore chugging. Noose Rot is as heavy as they come. The polished production actually aids the band’s musical output very well, and the songwriting features enough nuance to comprise a healthy account of death metal that won’t solely be appreciated by death metal fans alone. Starting off this monster record is the title track, “Manor of Infinite Forms”.  The intro section boasts a highly melodic line from the guitars whilst the band go through some gear changes: a little backing, followed by a little more phrasing.  A huge steroid-loaded blast beat takes the track to overdrive before a surprising initial groove establishes itself.  If you’re fans of the likes of Gatecreeper‘s or Genocide Pact‘s groove based sympathies then you’ve found your new favourite right here. Does the word Question strike you as a fitting moniker for a death metal band? Regardless if you think so, Mexico’s Question are releasing a cassette through vaunted cassette tape-specializing Caligari Records in the near future, and as is with most of the label’s releases, you just can’t go wrong with picking a tape from their catalog.  Question is a death metal unit with an intriguing style of brash, uptempo, frenetic, dissonant death metal the likes of which I can compare closely to that of Swedish band Degial.  The riffs and melodies are largely anti-melodic by nature and sound ill-fitting from a first listen’s perspective, but that doesn’t mean that you won’t like it. Death Metal has gone from the vague term people who know nothing about music use to describe all forms of aggressive music to the choice genre for popular bars and nightclubs across the country. In fact, a recent poll of American university students, mainly those in sororities, showed that 71% of all Greek life have either claimed to have or currently have a Gatecreeper shirt. Yep, you read that right, we sent CVLT Nation’s finest interns on a cross country trek to gather the most fascinating statistics surrounding Death Metal in America just for this article. Unfortunately, along the way Vice caught wind of what we were doing and more or less stole all of our interns and took all their data. From what I understand Vice will now be coming out with a ten-part mini series titled Greek Life and Gatecreeper: Rotting As One. In hindsight I feel like we could have avoided this by at least putting down a water bowl in the intern dungeon we have at the CVLT Nation mansion. Oh well! I remember the first time I heard Siege Column, I said to myself, unholy fuck this band is rad!!! With each release they just get sicker and continue to create music that they fucking love. Don’t even try to put this band in a box because it just would not work, but I will say they write some of my favorite songs in the underground. Imagine if Revenge decided to start dating Bolt Thrower, their love child might just sound like Siege Column. FIFTEEN:Legion Of Andromeda Fistful Of Hate

Right now, you can hit play and let the morbid raw sounds of Legion Of Andromeda fist-fuck your mind!