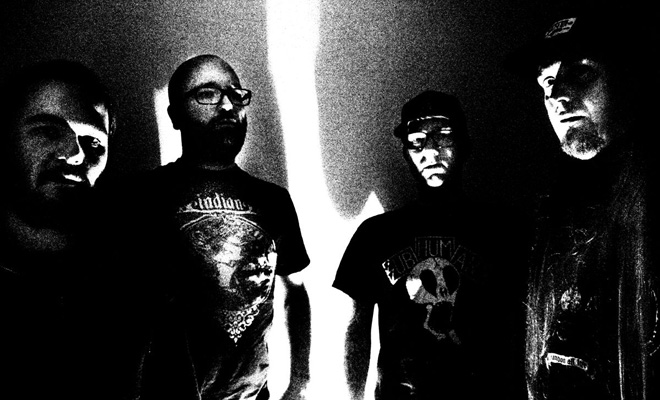 Did you guys set out to rip people’s faces off with your intense riffs & raging melody?

Well… yes. If you’re playing this kind of music and that’s not your intention, you’re going about it the wrong way.

When you watch the news about global events, what thoughts cross your mind?

Honestly, I’ve always done a lot to stay up to date on current events around the world, but lately, I find myself spending less and less time doing this. Especially here in Denmark, the political situation over the last few years has been so disconcerting that I can hardly bear to keep track of it any more. When following the news stream about global events, more than anything, I worry about what kind of world we are leaving for our kids, and if we will leave any world at all. This is one of the main reasons for writing the kind of lyrics we do. It’s not so much that I think that one pissed off aging punk’s thoughts will make a finger-licking difference in the world, it’s more of a way to cope with these feelings so as to not sink into total fucking apathy.

Did you grow up with music around you that forced you to think about your place in society? Did music become a way you could make a positive impact on the world?

I grew up in a home where the struggle to save the environment, to fight racism and for equal rights was present, ever since I was a kid. As such, eventually getting turned on to punk rock and hardcore was a good way to put some words to issues that I found important. Music is a powerful vessel. If someone comes up to you and says, “hey, let’s smash the state and overturn global capitalism,” you’ll probably agree with them, but that’s it. However, listening to a band like Catharsis, that in my opinion wrote some of the best lyrics in the genre, causes quite a different reaction with me: “if I could strike one blow to spite their force, though I might bear one hundred more, I would wear the welts like rubies and the shackles for a crown. And if I had one hundred hearts, I’d throw them all before their bullets, before I’d sell a single one to wield their power”. Lyrics like that make me instantly want to mask up and torch parliament, my local police station and any bank in sight. As such, music can serve as an inspiration for making a positive impact, but in my opinion, music is a tool. It cannot act for you, but it can inspire you.

If you had to describe the ANTI RITUAL sound in terms of Martial Arts, which disciple would it be and why?

It would be Eagle Claw paired with a bit of Praying Mantis Fist, cause it will rip your face off and eat it afterwards. No question. Why the name ANTI RITUAL?

We wanted something to express the aestethics of the music and the themes of the lyrics. We’ve all been playing music for many years, and the acts of playing music and screaming out lyrics serve at times almost as a cathartic ritual – to get it all out, you know. And what comes musically is harsh and aggressive, and thematically it’s a harsh critique of mainstream society and the feeling of being in opposition to it.

What would you say is the biggest influence on the band’s lyrical content?

The ever present need to do something constructive with our anger and frustration. To channel it into something somewhat productive. We are people who care deeply about politics, and doing so will inevitably leave an imprint on the lyrics you write. In terms of influencing the style of the lyrics, bands like Catharsis have always been hugely influential to me. They managed to bring a certain poetical dimension into the political lyrics that made them stand above the rest. Also, a now defunct Danish band called Lack, has always been an inspiration in terms of lyrics. Their singer Thomas Burø wrote what I think are unquestionably the best lyrics in Danish hardcore, ever.

Will ANTI RITUAL tour the States in 2014?

What do you really dig about the Copenhagen underground scene?

Well, in the last couple of years the spectrum has really broadened. It used to be that the underground scene that I was a part of was mainly centered around a squat called Jagtvej 69 and most bands there were going for that classic K-Town hardcore sound of the early 80’ies hardcore bands. Since the squat was torn down in 2007, though, these people have gotten into a lot of different genres, and now we have big DIY festivals here run by people from that same community. One is Kill Town Death Fest focusing primarily on death metal and one is Heavy Days In Doomtown focusing on doom, sludge and psychedelica. Also, this May will see the premiere of Copenhagen Psych Fest, plus there is an initiative called Festival of Endless Gratitude focusing on the experimental stuff. So, in short, what I dig about the Copenhagen underground scene, is that its become a bit less convoluted over the past years. The misguided bromance is less prevalent now than it has been, and this opens the door for some interesting musical endeavors.

The ANTI RITUAL EP is a co-release between
Vendetta Records from Berlin, DE
and Indisciplinarian.