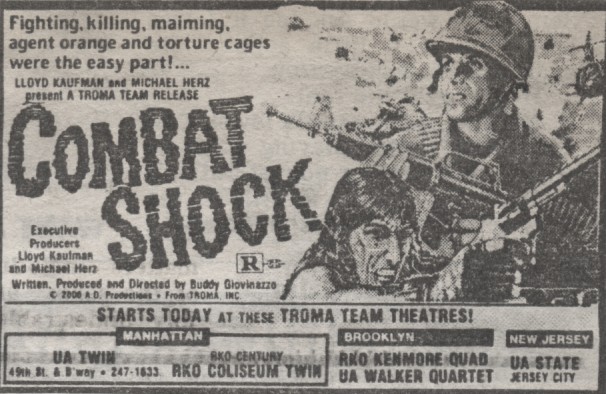 Do you know this song, ‘Frankie Teardrop’ by Suicide? Because Combat Shock’s plot is based on this song. Text was taken from Sex Before Suicide

The film follows a day in the miserable life of Frankie, a Vietnam veteran deeply and dangerously traumatized by his experience in the jungle. Every day. Every night. Every single minute he is haunting by his past and can not help it but trying to remember what happened back there. Flashbacks give us clues throughout the movie. He got lost in the jungle while on a mission, and can not recollect how he got there, stalked by a group of vietnamese. He finally ended up trapped, tortured and locked up in a cage for months and months, slowly falling into insanity. He woke up at the hospital, where he spent two years recovering. He is now living in a slum near the railroad in Staten Island, New York, with his wife and kid whose deformed due to agent orange effects. Sick and tired of hearing the creepy sounds of his baby,“You’re not looking for a job … You’re waiting for the world to end” said his wife before he leaves. Unskilled, depressive and smelly, he really can not get a job. So he keeps wandering in these filthy streets, that’s more like a real city, crossing the way of gang members. , a bum looking through the trash for a piece of meat full of maggots, whores, a pimp and other pathetic characters.