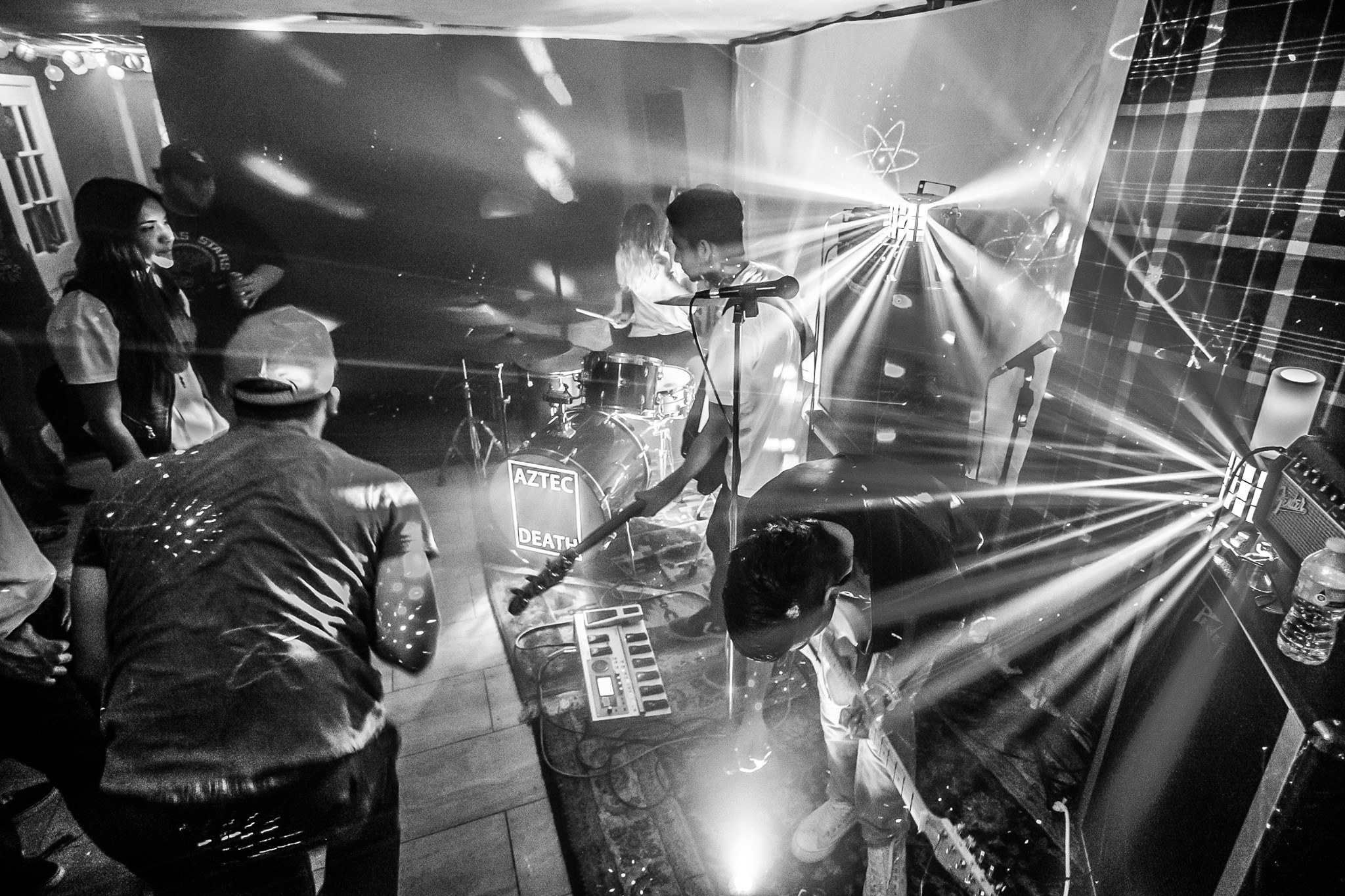 AZTEC DEATH from Dallas, Texas play a type of dark postpunk that might sound familiar to fans of Warsaw or the earlier days of Joy Division and the postpunk phases of classic bands like UK’s The Blitz (Second Empire Justice) or the USA’s The Proletariat (in their Indifference LP era). Aztec Death play minimalist, dark postpunk that packs a punch.

The Dallas three-piece plays a clean but somber style of early Factory Records-inspired music that is refreshing and crisp; the vocals are up front and center – unlike many current darker bands that tend to bury their vocals beneath waves of dark sludge – and are clearly enunciated. And, yes, while there is a hint of the almighty Ian Curtis in the vocal delivery, the band’s overall darker tones recall more the deeper spectrum of the original postpunk explosion – namely, oft-overlooked pioneering bands like Positive Noise and early The Opposition, or Glorious Din from San Francisco. In ideology and sound, they’re not too dissimilar from fellow Texans in the anarcho-postpunk band Annex. But Aztec Death also cite influences from the shoegaze genre.

What makes this Texas band stand out from the rest of the postpunk pack, though, are the band’s anarchist convictions, a fact that actually puts them much more in line with the anarchist postpunk tradition of bands like Lack of Knowledge, Famous Impostors and The Mob, and current anarcho-postpunk bands like Christ vs Warhol or Dead Cult. Aztec Death recently opened for Soft Moon on that band’s salvaged tour from what was originally supposed to be an opening slot on Killing Joke’s recently-aborted North American tour. Aztec Death are making their mark across North Texas and elsewhere with their thoughtful, steady and deliberate dark postpunk sound. Their three-song demo wins high marks from this writer and is well worth checking out. It is crisp, clean, and well-made politically-tinged gothy dark postpunk music that is refreshing to hear amid a sea of synthesizer-based “industrial” dark stuff that all too often seems to be the norm in dark music circles.

They’re playing upcoming shows with Soft Kill and Underpass on those band’s Summer tour(s). Aztec Death’s three-song demo is available on Bandcamp and from the band in person. I recently caught up with them to ask them about their demo and the response they’ve gotten so far from the postpunk, goth, and deathrock scenes.

To get some basic information out of the way first: When did Aztec Death start, who is in the band, what do they play, where are you all from, and how would you describe your sound?

Christopher Ortega (CO): Michael and I were looking for drummers and guitar players and singers. I wasn’t even sure I wanted to do vocals until I realized that I didn’t like the way other people did it. Once I started doing vocals, we realized we didn’t need anyone other than a drummer. I don’t think we were a real band until Trevor joined.

So there are three members: Michael – Bass, Trevor – Drums, and Christopher (me) – Guitar/Vocals. Mike and I are from San Diego, and Trevor is from Dallas. I would call our sound Post-Punk because it covers a lot of bases. I’ve heard other people call it darkwave, shoegaze, deathrock, etc. It’s all accurate. I have to ask about the name “Aztec Death” – is it a purposeful play on Christian Death? Who thought of the name and what does it signify?

CO: Have you ever heard of an Aztec death whistle? It’s the scariest instrument I’ve ever heard. It sounds like a person screaming. When I heard one for the first time, I thought it was so amazing that I wanted to name my band after that. However, Aztec Death Whistle was a rather lengthy name. One of my friends suggested I shorten it. So I did.

Yes, I like Christian Death, but it was more of coincidence that our name ended up being similar to theirs. It bothered me initially, but I thought that if we could distinguish our sound enough then it wouldn’t matter. You mentioned to me initially that Aztec Death was inspired by deathrock. What are some of your favorite bands and what influential bands do you feel shine through in the band’s work?

CO: I was already a fan of post-punk and goth, but I hadn’t even heard of deathrock until a few years ago. It was in the late hours of the night during one of my deep web searches that I found deathrock bands, and I really started backwards with it. Antiworld, Anasazi, Gitane Demone, Mephisto Walz, Skeletal Family, and Christian Death later on. After a friend referred me to Killed by Deathrock Vol. 1, that was all I needed to hear to know I wanted to make something dark.

There are so many bands that influence me. I use an organ pedal on some songs to get that signature deathrock sound, but I wasn’t inspired to use it by deathrock bands. “Pornography” by The Cure and “Intervention” by Arcade Fire made me want to experiment with organ noises. I use a lot of delay and reverb to fill out our sound; this is a lesson I got from shoegaze bands. I know Slowdive and Deafheaven do it, and that’s where I learned it from. If you asked me about a song, I could tell what band taught me how to do which part. Usually, the answer is Bob Mould and Robert Smith.

The band’s Bandcamp page mentions sympathies with anarchist thought. Is there a political direction the lyrics tend to take? Is there a guiding philosophy behind the band that informs the group’s lyrics? Who is the primary lyrics writer and what sort of topics do you all tackle?

CO: Everyone in the band is an Anarchist, and not because it sounds punk or it’s edgy. We genuinely dislike government and believe the world would be better off if people were left to themselves to make voluntary human interactions.

All of the lyrics on our demos and our upcoming album are very anti-government. The songs articulate issues of people willing to forsake reason and liberty for security, and how the greatest enemy of freedom has always been the government. In hindsight, I considered the name Aztec Death perfect once I considered its implications. Consider the barbarism of human sacrifice to please some divine authority in the name of our well-being. We think human sacrifice and government are equally ridiculous for the same reason.

A question I like to ask all bands: If you were stranded on a desert island and could somehow magically play records, what are the 5 records you’d choose to be stranded with forever more, and why?

CO:
Okkervil River – Black Sheep Boy
Will Sheff has an amazing voice. You can hear the loneliness when he sings. The music on Black Sheep Boy takes you to a place where you look through the eyes of sorrow and the beast picks you up and carries you far away.

The Cure – Disintegration
That whole album sounds like magic. Once I heard that explosion in “Plainsong,” it swept me off my feet. I think everyone should hear it at least once before they die.

Trevor (drums):
Genesis – The Lamb Lies Down On Broadway

The greatest concept album in the peak of 70’s prog rock, it masterfully blends introspective lyrics along with a narrative, and it proved to be the bands Magnum Opus in terms of technicality, innovation, and lyricism.