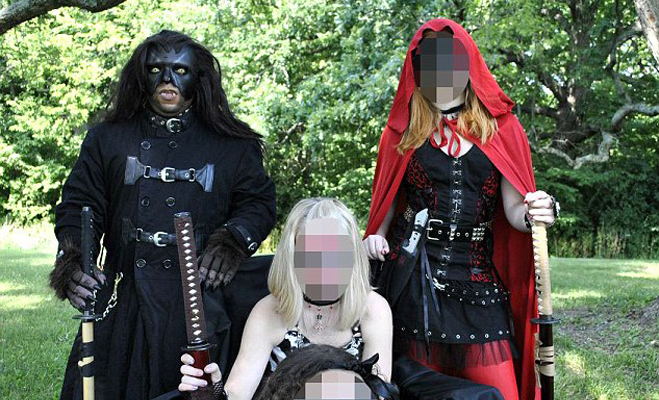 A werewolf enthusiast who went on the run with a 14-year-old girl is suspected of recruiting the teenager online for fantasy role-play games that led to a sexual relationship.

Mark Edwards, 44, who goes by the alias Nagamishe Shiro online, is alleged to have groomed the vulnerable 14-year-old to join his ‘slayer covenant’.

Multiple albums have been discovered online of Edwards dressed in a werewolf costume along with teens in skimpy outfits role-playing sword and gun fights in a secluded, wooded area.

Edwards, who is married and from Ohio, was arrested on February 28 after he went on the run with a girl for three days. Werewolf enthusiast Mark Edwards, 44, posted pictures of himself with teenage girls online after recruiting them to join his slayer convenant It came after he was released on $50,000 bond last month on counts of unlawful sexual conduct with a minor and interference with custody from when he and the girl went missing last September.
The 44-year-old now faces charges on both separate cases. A grand jury is scheduled to debate the case today.
Edwards, who has worked as a security guard and an animal trapper, is being held at Clark County Jail on $500,000 bond.
Edwards’ wife told a local station on Friday that she would support her husband through the allegations.
On his Facebook profile, Edwards describes his slayer covenant as ‘a world wide secret organization of Werewolves, Vampires, Werecats or Hell cats, and Hybrid humans that work together to protect the human race from the evil of demons and other evil vampires or werewolves’.
He compared his group to a Jedi order for training ‘young slayers that show remarkable powers and recruiting any new slayers’.
There are multiple photos of Edwards posing in a werewolf mask and fangs, combat-style clothes and brandishing swords and guns.
Edwards’ Facebook photos contain several young women wearing masks and fantasy-style costumes of capes, gloves and carrying weapons.
They are pictured clashing swords in a wooded area and standing knee-deep in a lake. In one photo from 2012, a girl is sitting in Edwards lap.
In one disturbing album, Edwards appears to be feasting on a raw, dead animal, his face covered in blood. Other images include a bloodied Edwards and a fake human head. Edwards, who has worked as an animal trapper, posted pictures online of himself appearing to feed on raw carcasses and covered in blood Edwards, 44, who goes by the alias Nagamishe Shiro online appears in photos with a raw rabbit leg between his fake fangs

Investigators have taken computers from Edwards’ home and are looking for any evidence of criminal activity or inappropriate sexual acts.
Police officers who searched Edwards’ home also found a freezer of animal parts but said that it could be from legal hunting.
The alleged victim’s mother described Edwards’ hold over her daughter like cult-like brainwashing. She said that Edwards was a friend of the family in the past when he lived nearby.

According to a police report seen by KTVU, the girl told her mother that she had sex with Edwards many times at his home between April and August 2013.
The couple fled for the first time after the girl’s mother reported the alleged inappropriate relationship to police. Edwards, from Ohio, is facing charges over an alleged inappropriate relationship with a teenage girl which began last year Edwards compares his group to a Jedi order, claiming to train slayers who show ‘remarkable powers’

Clark County Sheriff Gene Kelly said: ‘The guy made himself out to be a warrior. His attempt by posting these videos on YouTube was to reach a larger audience. He wanted to publicize his alter ego.’
However Edwards’ friend RaMondo Brando, who convinced his friend to turn himself in after he went on the run with girl, said that the 44-year-old’s interest in fantasy games is just a hobby and that he ran away with Miss Bruce in a misguided attempt to help her.
Mr Brando, who did martial arts training with Edwards, said that his friend would posed no danger to the teenage girl. Edwards, 44, kept his head down as he was led to an Ohio jail in handcuffs. A grand jury is deciding todaywhether he will face charges after running off with a teenage girl