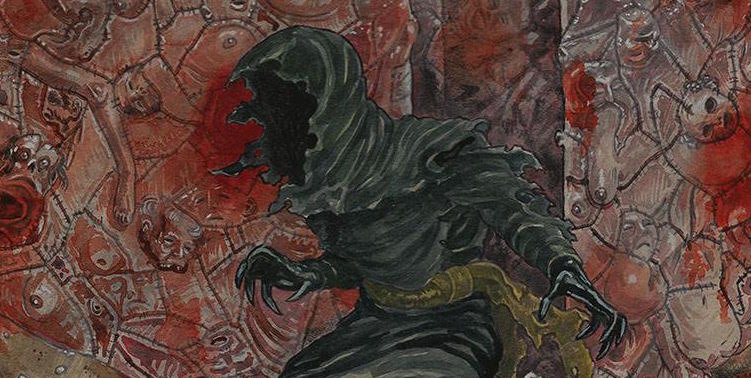 Our Place of Worship is Silence return on April 13th with their second album, “With Inexorable Suffering”. The L.A based Death/Black metal act are back with a vengeance some 2 years after their debut album, “The Embodiment of Hate”.  Despite the many familiar black and death metal components found in these recordings, O.P.W.I.S have delivered a truly unique album of wicked, twisted darkness.  Seven tracks of primitive death metal awaits.

Remember “Thriller”? The one by Michael Jackson? Yes, that one! Well, someone was employed during the final stages of recording to do one job.  The fade outs. (Unfortunately, I can’t find the citation for this claim, when I actually need it)  This was before automation from computers could do this for you.  Hiring a person specifically for this task gives some indication to the importance of small nuances such as ‘fade outs’.  They provide a dynamic quality that can add atmosphere, texture or even just for distinction between tracks.

O.P.W.I.S have utilised this in a different, yet very effective way.  It’s almost the first feature of the whole album and it creates the perfect atmosphere. A lone guitar begins before a second one appears in the mix to bolster the same winding, tremolo picked riff.  Once the riff is established, thunderous toms are heard pounding at an ever increasing crescendo.

The drums fade in, gradually louder with each measure as the initial riff fades out in the opposite direction.  Once the drums are at their peak you realise the drummer was playing to a different tune.  This fade in/fade out introduction is one of my favourite things at the moment, in general! “Artificial Purgatory” is the perfect opener. An instrumental track that is not an uncommon choice for an intro in the world of metal.  It has the intended effect. That being, to set the scene and establish expectations. A tight, focused riff with a cutting crunch leads the way with a stomping first track.  The song ends with helpless cries of anguish from a sorry human being.  Eventually, you hear why all the panic; a big cat, or worse growls in the background. It becomes clear that a struggle can be heard as shrieks and grunts are exchanged. The human is losing.  The human has lost…

Following on from the introduction is “Chronicles of Annihilation”. The opening is a caustic outburst that is driven by a brutal blast beat, treading the line between death and black metal.  The vocals are delivered with a reverb soaked guttural style.  More Doom/Death than the typically shrill Black metal cries.  This is also the first example of a dense, detailed composition style that O.P.W.I.S have in their tool bag.  I really enjoy the alternate switching between a slow doom-laden groove, before reverting back to full blast territory.

Mind the bones on your way out….

I think the next track is a great display of Our Place of Worship is Silence‘s ability to truly hybridise the death and black metal styles.  They achieve this in “The Blind Chimera and its Death” not just by riff style or technique, but by the mood and feeling as well.  Their use of unorthodox sounding chords and progressions is another marker for their fresh sound. The rhythm opening out during last stages of the song in particular are another highlight that makes this track.

Tread carefully, for now we enter the labyrinth.  Track 4, “Labyrinth Disorientation” marks the half way point in the album and it’s strength becomes apparent immediately. The rhythmically punctuated way the guitar riff is delivered reminds me of Swedish death metal lords, Hypocrisy, particularly the Abducted era.    The main riff that drives the song is intricate and complex. The distorted guitars have clarity and weight that has a wide presence when listening to the album in general.

We are all doomed.

Our Place of Worship is Silence talk of their style being ‘blackened death metal with  bludgeoning drums and shifty, creeping riffs’. There is probably no better way to describe them!

“Defiance and Upheaval” continues the journey of suffering with another mammoth track.  The detail and thought put into each composition is clear again with the fifth track from “With Inexorable Suffering”. Chaotic and complex riffs are at times, not too dissimilar from the Steve Tucker fronted era of Morbid Angel.

Within a few measures of “The Decay Maxim” however, the style could be more likened to later period black metal albums from Darkthrone such as “Sardonic Wrath” or “Hate Them”. The guitars scratch out vicious, venom-like riffs, as drums pummel and pound relentlessly to lay foundations for the demonic, animalistic vocals.

Another doom heavy riff starts off the final track from“With Inexorable Suffering”, “Lawlessness Will Abound”. Staying with a more slower tempo, the track moves through some now familiar, contorted, outside of normal riffs. The band has a time-warping quality to their phrasing at times in this track and with others earlier on.

The final song is also the longest.  Approaching 8 minutes in running time, the song evolves continuously, constantly keeping you interested in its development. After several changes that gradually build the song in weight and detail, an enormous, bass heavy explosion interrupts and dominates the song for a second.  The band suddenly launch into a much faster tempo, no ramp up or warning, as if in a final attempt at escape from the terrors that lurk. It transforms the song further to a become a monster of a closing track.

This is the end.

Our Place of Worship is Silence‘s latest album,“With Inexorable Suffering” is phenomenal metal album that manages to master a truly unique blend of black and death metal influences to create a fresh sounding style.  The production is raw and murky, it serves to perfectly complement the concepts portrayed within the album of an imminent human demise to an other-worldly kind of evil that lurks closer than you think.