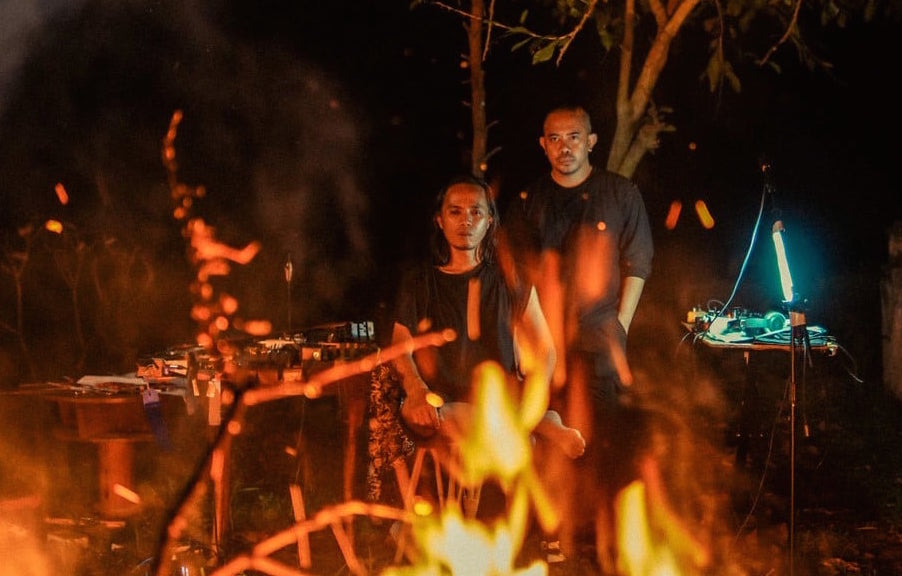 Walking a fine line between High Art and Doom since 2014, Indonesian Duo Senyawa is poised to release their latest full length “Alkisah” on February 12th. In order to subvert the hierarchical structures of the music industry, it will be released through a cooperative agreement among many labels throughout the world. You can find it here as one of the debut releases from the newly formed Burning Ambulance records.

Senyawa’s sound is rather hard to describe. A first impression might conjure comparisons to Sunn O>>> and early Test Dept. filtered through their Indonesian homeland, but really it is much more complicated than that. The duo combines structure and improvisation and utilizes a wide sound palette created by Wukir Suryadi’s homemade instruments. Vocalist Rully Shabara moans, chants and wails over the controlled cacophony, imbuing the material with a sense of deep meaning, even if the language is lost on most western ears.
“Alkisah” tells the story of a once-powerful country that is suffering its violent decline and rebirth. Torn apart from within, the society attempts to right its course only to find that cycles of oppression tend to repeat themselves. This meditation is timely and it is a story many countries are currently living through.

After the short pastoral introduction of “Kekuasaan”, “Alkisah I” truly gives the listener a sense of the bleak landscape of the album. The entire track is underlined with a short figure, source instrument unclear, repeated endlessly, and hypnotically, while Shabara provides a captivating vocal performance over the top. Shards of percussion constantly intrude and squalls of feedback come and go. Throbbing Gristle, early Swans, and Duma all provide points of reference, but so does the Industrial percussive work of Z’EV and Test Dept. Yet all of these are filtered through a completely unique cultural context and come out as something strikingly original.

“Menuju Maura” is simultaneously confrontational and ecstatic and sounds like the return of outre music mavericks Crash Worship. It tells of an exodus by people fleeing violence. “Istana” takes a more meditative path, and hints at their past collaboration with Sunn O>>>. The vocal here possesses a sacred quality, intoning the story at a point where the new rulers become crueler than the ones that came before. The voice combined with the suffocating low-end conveys a true sense of oppression, a weight that can neither be relieved nor sustained.

“Kabau” comes as a great sigh of relief and sounds like the kind of work Steve Von Till would do if he didn’t come from the Imperial West. The lyrics consist of Minang proverbs and the feel here is quite intimate, like wisdom shared over a campfire. This piece highlights one of Senyawa’s strengths, despite their innate heaviness, the album possesses many moments of great intimacy. “Fasih” returns to the intense percussion and a spitting vocal clash with intrusions of noise. “Alkisah II” has a similar or same rhythmic figure as “Alkisah I”, but lower-pitched and more acoustic-sounding in execution. The mood is more somber but feels like a different part in the same tragic story.

The album concludes with the short “Kiamat”, a brief statement of apocalypse. Barely over a minute, the end comes in a quick act of violence. The listener is left to ask, does the story end or merely start over again, are we doomed to live through the violence endlessly?
Senyawa strikes a nerve with this concept album. The United States seems to be living through the madness metaphorically described here but we don’t own this story, it is a cycle of violence that seems to call every place home. Does humanity ever evolve or is this record stuck on repeat? Either way, this duo has constructed an album as compelling sonically as it is ontologically and it should not be ignored.