Text by Spyros and Photos by Abi Ghoulson

This tour could not be more timely. Endon recently released the successor to the seminal Through The Mirror, taking an old-school punk detour with Boy Meets Girl. Baptists cemented their name in the current punk/crust pantheon with Beacon Of Faith, while Sumac influenced by their collaboration with the great Keiji Haino lodged themselves in the intersection between sludge and free-rock. So the three of them were passing through Manchester, visiting the Deaf Institute and I had the opportunity of experiencing this splendid show.

First on stage was Endon, who immediately pinned down the audience with their chaotic progressions and dense song structures. The band was on an absolute tear with the presence of vocals, drums and guitars being augmented through the use of electronics and the band’s notorious noise machines. Their sound, with both its complex and overwhelming characteristics translates impressively well on stage, with tracks from Through the Mirror in “Your Ghost Is Dead” shining in all its black metal, grind induced glory. Vocalist Taichi Nagura was especially impressive with his unlimited vocal range traversing from black metal shrieks to deep guttural growls and harrowing crying. The band really gave its all on stage and their performance was the perfect opener for what would come after.

Baptists are next on stage and kick things off with their Beacon of Faith opener “Worse Than Hate”. The slower progression of the track sets up an impressive performance as drummer Nick Yacyshyn and bassist Shawn Hawryluk lay down the groove while guitarist Danny Marshall unleashes his sharp, obtrusive riffs. And then you got Andrew Drury on vocals who just gives one hell of a performance, with a primal and caustic demeanor. While their slower pace and breakdowns are impressive Baptists really shine on their faster, energetic moments. “String Up” and “Bushcraft”, which was introduced in the punk approved way as Marshall yells the track name to the crowd without a mic, harness all the core attributes of Baptists and maniacally project these on their performance. The presence of Drury was also instrumental in this regard as he has instigating the creation of a mosh pit, and in some cases, as with “Think Tank Breed” he has actively participating. Stepping from the stage to the bar and then down to the crowd area he sure kept things interesting.

Final band on stage was of course Sumac, with Yacyshyn returning to the drum kit and being joined by bassist Brian Cook and guitarist/vocalist Aaron Turner. Beginning with “Attis’ Blade” from Love In Shadow, Turner and Cook begin to unleash an absolute assault through their SoundCity cabinets while Yacyshyn was laying down the rhythmic progression. And from the steady progression and heavy riffing the sharp change to the free rock form was simply flawless. The shrieking lead parts of Turner take over with their dissonant and captivating characteristic, while he turned into this maniacal persona lost in a sonic trance. From there Sumac carried on with tracks from the new record, first “Arcing Silver” setting off with the gritty bass and ritualistic drumming slowly building up this imposing structure. Turner joining once more in a drunken recital with his Haino induced transformation unleashing an impressive cacophony. Unfortunately that was also when things took an unfortunate turn with either the guitar or the amp experiencing some technical difficulties. Cook and Yacyshyn took over for a short time, allowing Turner to investigate what was causing the issue, but to no avail, as he announces: “Sorry, this is it. Shit is broken. Can’t fix it. Thanks for coming!”. Despite the slight disappointment, Sumac did still provide a performance for the ages, concluding the event in a very strong way.

In this article:baptists, Endon, sumac 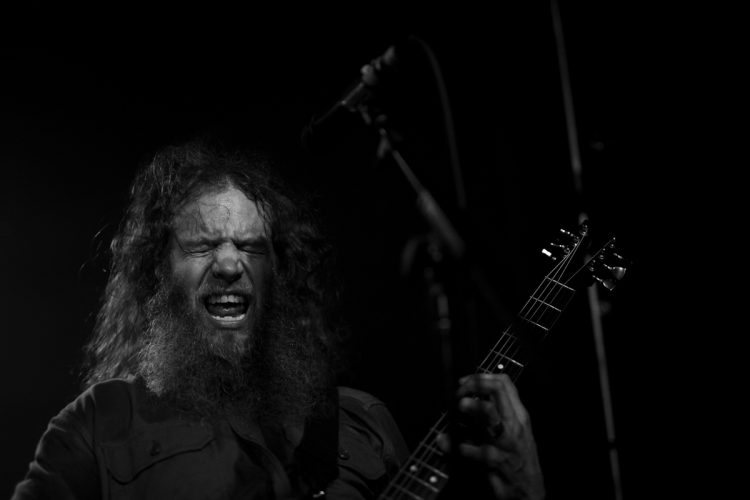