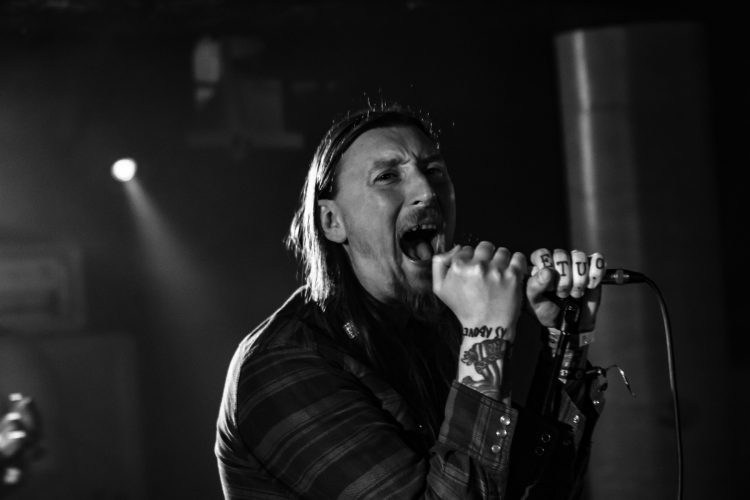 SūRYA are another crushing highlight and equally great start to the day after a meagre four hours of sleep. Mostly instrumental and reminiscent of post-metal greats CULT OF LUNA; the heavier parts are more reflective of YEAR OF NO LIGHT with a sludgy blackened element. The visuals and spoken word samples convey the depressingly sobering message of the state the world is in today. SūRYA have stated themselves that their mission is to “hold up a mirror” to reflect upon that state and strive for a change. It’s a time for meditation and reflection while being immersed in the bleak soundscape that they carefully compose with leading thunderous and ever building KYLESA style drums peppered with powerful symbol crashes from Raquel Alves. This combined with shimmering layered guitar and bass with plenty of pedal effects and the odd howling vocal from Mark Green for intense effect. The set builds magnificently to a satisfying crescendo not dissimilar to the post-metal greats AMENRA, all in all a fabulous wake up call for those that are still bleary eyed and floppy tailed.

Having decided to forfeit EARTHLESS to bear witness to the hotly tipped to be crushing VIDEO NASTIES, featuring members of IRON WITCH, BENDAL INTERLUDE, MAGPYES and SSS. The most rewarding part is witnessing the worse for wear guitarist puke into a cup in between attempts to continue playing. At the risk of immaturity, it is still damn hilarious. Despite this hiccup which unfortunately means the set is cut short, they are still pretty fucking (excuse the pun) sick. Blasting out a crushing performance against a dark and smoky green haze which at times is like Swedish Death Metal greats AT THE GATES but with a fun and comical punky vibe. The Black Heart is totally packed to witness the destruction and despite the set being cut short is left suitably sweaty and impressed.

CHVE and Syndrome are probably the quietest, most delicate performance of the festival; featuring the two longest standing members of AMENRA Colin H Van Eeckhout and Mathieu Vandekerckhove, they are barely visible on the darkened stage but treat the Underworld to a droney, simplistic but mesmerising set. Eeckhout slowly spins the wheel of a hurdy gurdy to lend a folk air to his gentle chants; the overall result envelops the Underworld in a sonic blanket leaving space for quiet contemplation and reflection. Eeckhout humbly leaves the stage to leave space for Syndrome alone to emanate more stripped-down sonic magnificence.

When it comes to the heaviest band of the weekend, THE SECRET blow any other competitors right out of the already turbulent waters, storming ahead with a hurricane of noise in the ear shattering form of crusty blackened grind. Their music builds intensity to a level of complete mania. Singer Marco Coslovich is clearly hammered but enjoying himself immensely as he gleefully sprays several cans of beers over a moshing audience, including pouring the entire contents over one particular avid female fan’s upturned face. His stage presence might be considered obnoxious but the rabid audience don’t seem to give a shit and his friendly fist bumping demeanor mixed with the cheeky antics get a pass and are a really pretty damn hilarious. Drummer Tomasso Corte (who is actually due to leave the band after a solid 14 years performing with them) annihilates his kit with lightning fast blasts and groovy d-beats. Slowed down high tone old school black metal riffs and Coslovich’s ominous howls contrast with caustic and fast as fuck crust. They relentlessly tear through the set, ripping the Underworld a new one by closing with the frenzied and chaotic ‘Cupio Dissolvi’.

A quick dash over to the superbly packed Black Heart for Italian doom/jazz quartet MESSA results in being utterly entranced by the honeyed but haunting, yet also commanding and raw dulcet tones of Sara, which stand out beautifully against a doomy background with a nostalgic seventies feel. The drums are crushing and slow but also jazzy and light while the riffs are piercing and complex soaring upwards to an ethereal climax and plummeting back to gloomy depths. After the healthy dose of doom, they break into an incredibly light loungey interlude before adding back more slabs of occult.

THE DEVIL AND THE ALMIGHTY BLUES are an enthralling discoveryith a distinctly Americana and probably unsurprisingly evil deep south sound but actually hailing from Oslo, Norway. They play soulful and twisted, but groovy, almost doom laden with bluesy twangy licks and riffs which sometime have a seventies feel. Opening with what is later found out to be the lengthy ‘Salt the Earth’, it’s a long instrumental build up until JOHN GARCIA-esque vocals kick in. It is the following track ‘Root to Root’ which is the highlight of the set with its catchy hooks and soulful singing and a fuzzy seventies distortion to the vocals, lending a much more old school vibe.

THE DEVIL AND THE ALMIGHTY BLUES

MONDO GENERATOR are the grand finale to an awesome weekend with a plethora of talent in the form of various genres. Being Desertfest though, it of course makes sense to bring it back to desert rock. Those who attended FU MANCHU pack themselves into the Underworld to catch the infamous Nick Oliveri and despite a slightly (unsurprisingly) usual obnoxious attitude. They still deliver a great, energetic, surprisingly heavy set including to most

viewers delight faster, chunkier covers of KYUSS. He opens with ‘Molten Universe’ and closes with ‘Green Machine’ and ‘Allen’s Wrench’. Thus aptly closing another chapter of Desertfest with balls out stoner rock.