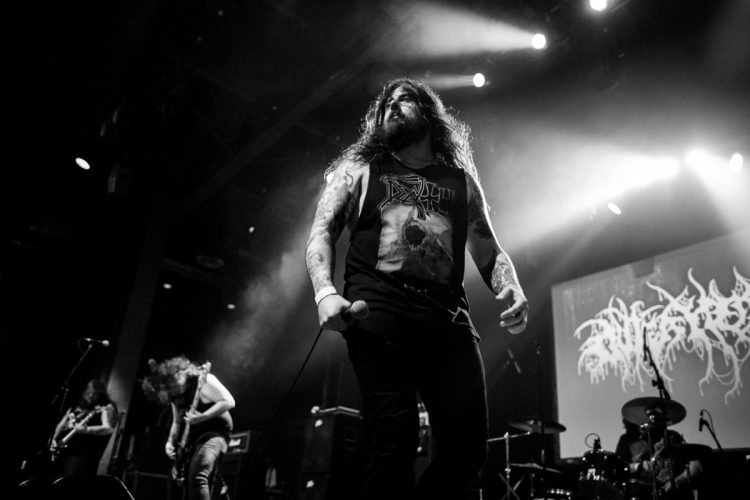 I’m not hungover which is something of a surprise considering I thought I tried all the beers. The dudes from Decibel seem surprised too. That’s cool. Turns out I have a whole lot more drinking to do and really didn’t take as good care to expound on the wonder of hops as I thought. My notes are also clearly omitting some strange and wonderful beverages like whatever the fuck Adroit made that was a surprisingly inviting blend of cigar ash, hot chocolate and mushrooms.

I worry, perhaps, that all the heavy is interfering with my steadfast descent into a lost weekend of limited edition microbrews and the critical (albeit slurred and rather unintelligible) dissection thereof.

I had it in my head that Outer Heaven were death metal newjacks and though they may be baby-faced in comparison to many of the greying, churlish luminaries on this bill, they’ve actually been a band for the better part of a decade and they kick the shit out of the grooling monster mash like it’s the be all fuckin’ end all of man’s artful expression and I wish I could’ve granted more headspace to their fresh new rock and roll hellscape but my prize lens shit the bed about about thirty seconds in and I need to take some time to freak the fuck out a bit.

Against the Grain – (name forgotten) IPA – Eh. I think this brewery’s best beer might be “The Brown Note” which just hurts my hurt. Huh. The more I sip this sticky wicket, the better it seems to be treating me.

Oh man, this is hard.

I learned to love Heavy Temple HARD when they were a trio of unfuckwithable women kickin’ pricks and taking names in the backwoods of Maryland but that iteration went dodo just a few weeks before this gig and though I know the band has always been Nighthawk’s show, I’m decidedly apprehensive about what this new way can offer the table.

Decidedly more stoned and dethroned than when I last caught them at Vitus, Heavy Temple swap some of the pure RAWK fury that made them so decidedly swoonable for lava lamp expanses and a 70s teenage daydream which is pretty goddamn digable in it’s own way.

Broken Goblet – Burn Them All Away: Official beer of the fest. Need a ticket. Found on floor. FUCK! Mad high ABV. Vaguely reminiscent of making out with your uncle on Xmas. VERY CHERRY!

I have this dim recollection of me and Dave standing outside of the Bowery Ballroom shitfaced on the first or second day of the Temporary Residence anniversary showcase when suddenly Dave snapped out of his stupor. shouted something vaguely Japanese and ran off.

When he came back he was with Envy and slurred at me to take his picture.

I guess I did but I have no idea where those images live.

I don’t remember much after that but Ms. M assured me (the next day, blisteringly hungover and curiously bruised) that I had gone positively ballistic the minute those motherfuckers hit the stage and only broke character to tell her, in earnest over a cigarette, that I loved her.

Or was that the next night during Explosions in the Sky?

I should remember such critical points in my life but since I can’t I listen to bands like Rosetta who shore up the same brand of windy aching-heart freakouts as those that got me through to love again.

Four things I didn’t know about Deceased before tonight:

They were the first band signed to Relapse records which pretty much makes them metal fucking royalty.

Their frontman is named King Fowley which isn’t some swaggering nom de guerre but, rather, short for Kingsley. His full name is Kinglsey Eldon Fowley III which is totally the name of metal fucking royalty.

My introduction to the band via the UHF/VHF sampler (which I’m pretty sure I stole from Sam Goody, fresh out of high school) was not nearly sufficient to impress upon me just how fucking rad Deceased is, was and will be. It certainly didn’t do enough to inform me that at the time of that comp’s release, the band had already been churning out the horror business for damn near a decade and would continue to do so for another quarter or so of a century steadily building a rather stunning oeuvre of progressive death-first power metal mayhem that I am a total dink for not fucking with sooner.

This is their first gig without longtime drummer Dave “Scarface” Castillo who drowned in El Salvador late last year and despite (or perhaps inspired by) the ghost in the great ghost in the room, Deceased offer up a totally fucking uproarious performance.

I’ve been trying to get with Enslaved for a minute because the knowhows always point to them as a triumph of metal’s possibility which I totally understand and respect but often find a tad too intelligent for my cavemen yen which is why I was so friggin’ stoked on this gig wherein the band would take all the years and gears they’ve been refining, exploring, expanding and return to the stunning brutishness of their Viking epic Frost.

And goddamn, do they illuminate the shit out of that bleak, black slab of Nordic wax, delivering each note with the headstrong madness of e bleeding wolf with bared teeth and tattered manes shaking in the mist of the icy blue.

I mean, they’re fucking huge, dude. Goddamn monsters among men delivering the watermark of their youth to the frenzied ardor of the wide-eyed many who still can’t believe such sounds could be ever true.

I really appreciate how divided people are on Deafheaven.

I mean, I totally love them live because how couldn’t I?

Just look at George Clarke, man. He’s a fucking wonder up there. A born frontman with a sinister messianic presence, he commands his place on the stage with a crowing rage few but Nick Cave can touch.

And, of course, the rest of the band is madly capable of forging a vivid palette from their monochromatic debt and they do so with thunderous aplomb but for all their sonic wonderment, it’s Mr. Clarke that steals your heart and if it weren’t for his merciless jaw I would place him atop my short list of man crushes.

I know EVERYONE loves Black Sabbath but, really, Tom G. Warrior is the reason you listen to metal.

Between Hellhammer and Celtic Frost he wrote and broke every adage of heavy that would shape the sonic canon that made bands like…well, pretty much everyone…possible and so, when that motherfucker takes the stage you best clasp your balls and pay homage.

And I do and we do and that’s cool but goddamn if Tryptikon doesn’t take their sweet ass time hitting the stage and once they do they immediately kick into the slow, merciless palatial which has always been a critical part of Tom G’s aesthetic, sure, but holy shit is an entire set of turgid prolifics a challenge to endure.

And, honestly, I don’t make it the whole way.

Halfway through a decidedly pitch drop interpretation of “Dethroned Empror” I call it a day.

Rumor has it, the band fleshed out the rest of their set with a twenty-minute plus deluge which I’d like to think was cool but might seriously have been the only difference between another day at the rat parade and auto-erotic asphyxiation.

3 Floyds – Dark Lord of the Sun: Aged in bourbon barrels. 15%. Red ticket. Jesus CHRIST. A beer so strong, I literally had to walk it off. Delicious though. Unfuckwithable. The beer many drunks praised as the be all end all of the fest. I snuck a second…and a third. I will try and forget that on the bus home tomorrow.