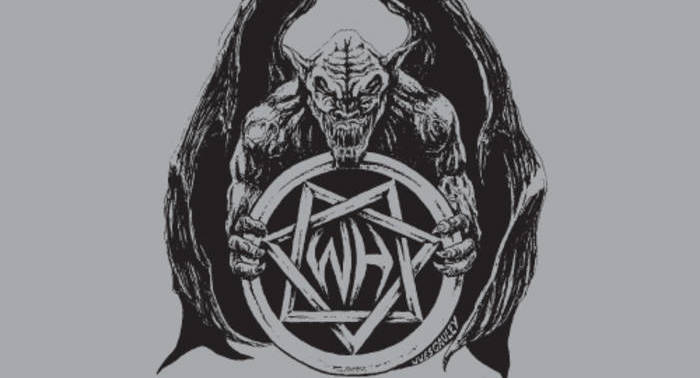 This summer at Covenant Festival IV in Vancouver BC all hell will break loose. BLASPHEMY, INCANTATION, PROFANATICA, and the like all on the same stage will usher in one of the darkest, most savage events in recent Canadian history.

However, another dimension exists to this gathering that is even more profound. The ancient speed metal gods WITCHES HAMMER will return to the stage for the first time in 29 years. Many know of the band as a pre-cursor to several Ross Bay Cult bands, mainly through re-releases and nostalgic forum posts, but lack a deeper appreciation for the absolute true spirit of uncompromising metal they possessed.

Original guitarist Marco Banco (TYRANTS BLOOD, ex-BLASPHEMY) takes us back to the wild west and reveals a time when the genesis of something exciting was just starting to take off. Listen up and take a history lesson from one of your betters. Soon the next generation will know!

COVENANT: Alright! So we know who you are, most people reading this at least have an idea, and anyone in this city is aware of your impressive resume, but now we’re here to talk about WITCHES HAMMER!

We know that a gang of Delta miscreants started the first speed metal band in Western Canada, but for the uninitiated can you provided a quick blow-by-blow, highlight-reel of the band’s brief history?

MB: Alright. So, a brief history:

There wasn’t a lot of like minded kids into heavy music back in the front early 80’s.

For instance, in my junior high, the kids that were into Judas Priest, Sabbath, KISS, Blue Oyster Cult, Rush, Saxon, Maiden etc. weren’t down with Motörhead the Sex Pistols, Plasmatics, Cirith Ungol and groups like that. So we started to drift into a micro scene that was our own.

We still all had no out, but the 3 or 4 of us that wanted our own thing started seeking out the strange bands whose albums were being sold in the back of Kerrang, Enfer, and zines like that. Started making our way into the city to the import shops just find something unique, heavier, faster.

That’s how what ended up being the metal scene we all hang in today started.

Just young preteen punks and headbangers looking to carve out our own piece of turf.

When I started playing the stupid guitar, of course I sought out the few and far between to make noise with. It was cool having something not too many people were into. In fact, they hated it. So you know you’re headed the right way. Steal their Led Zeppelin and Nazareth, cool.

When I figured I had enough chops to get a bit more serious, I put an add in the Straight (local arts & culture rag) for people into Motörhead, Exciter, Culprit and stuff like that. The only person that answered was Ray. He and his brother were the coolest guys on the block and just happened to be into all the same shit I was digging.

We called ourselves Death, then Oblivion, then I happened on The Malleus Mallificarum in the school library. So I lifted it and the speed metal scene was on. At this point WITCHES HAMMER is a band practically revered as mythological among underground cultos. Folks like us (in our late 20’s early 30’s) have only heard rumours and read interview questions of the old days: chaotic house parties, wild violence at gigs, and a forward thinking attitude that seems to be a thing of the past. Can you give us a bit of a glimpse into what harsh METAL looked like in the Vancouver area in the mid 80’s?

MB: The things that are interesting from back in those early days, to me anyway, was that we weren’t clean, old enough, or polished up to be taken seriously by the metal and heavy rock scene.

That was when Helix, pre-glam, Van Halen, Maiden, and Rush were massive. The early eyeliner, hairspray metal days. Those dudes looked at us with our greasy hair, ripped up poor clothes, and just thought we were punks.

We played way too loud and way too fast, so they told us to fuck off and take our punk rock crappy attitude with us.

No problem, I didn’t like those sweet smelling douchebags anyway.

So off we fucked into the dregs of the East end [of the city], and cut our teeth opening up for far superior acts like DOA, Death Sentence, SNFU, The Accused, and Verbal Abuse.

Those cats got it right away, those were the first crossover shows, and those other glammy creeps were out of the picture.

Of course, performing our very first show, my first EVER live show with Exciter, Exodus, Metal Church and Sacred Blade was a huge deal for us, and especially because that was the era where every gig like that was laying a foundation, building on momentum. The Metallica “Ride the Lightning” tour had completed tore the city’s music scene a black hole. What emerged was an army, literally overnight, of people breathing this new found energy: our era, our niche, our generation had its sound and it was profound.

So with that we had our bridge between the outer municipalities and into the city. We hit it hard. The kids started renting halls and putting on wicked sold out shows. We weren’t old enough for the bars; well, we could play the bars with the punk bands back then, but the kids our age couldn’t come to the gigs. So metal shows were underage teenage riots. Thrown at house parties on the weekends and rented skating rinks and halls the next.

That’s where it was at: independent, DYI, very cool, I thought. John McEntee on Incantation Being Legends and Punx

Submerged in the crowd of sweaty metalheads commenting on each other’s obscure t-shirts; I sipped my beer and reflected on the performances I had...