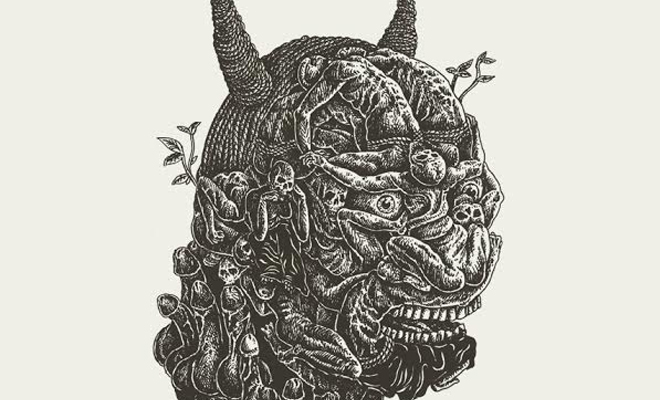 Hey Pete, how are things in your world?

Things are chaotic! I have no one to blame but myself though …

Describe for us the creative process for your new album, Raised Into Darkness?

6 men stand in a room once a week for a few months making loud noises. Loud noises become songs. 7th man enters room, records music, leaves, 8th man sits at desk for too many hours while some of the original 6 waggle fingers about the pushing of buttons and stuff. All men sit around listening. Songs travel through virtual world to 9th man who pushes further buttons. More listening. 10th man provides art to 11th man, 11th man arranges art and words. Songs and art are then provided to 12th man who then provides it to a 13th man who has a big machine. 13th man takes product of big machine and sends it back to 12th man who sends it to the 6 men who then go about selling the product to as many good men and women as they can. With any luck everyone is then satisfied…. that is what you were after, right? Why is Whitehorse able to bridge the gap between the metal and punk scene?

That’s an interesting one… We get a lot of appreciation from both the metal and the punk scenes, which is great because I think all of us are the kind of people that enjoy being involved in both scenes for the most part and came up listening to all sorts of metal and punk as well as noise. I fell that the energy of Whitehorse, especially live is a bit more along the aggressive punk vibe than metal in general but the heaviness and metal elements definitely get us some appreciation when we play more metal shows.

Playing at both Total Attack III Fest (a killer punk fest) in Brisbane last year, then a month or so later playing Evil Invaders (a awesome metal fest) in Sydney was great.

Do many of your members come from a DIY background?

Definitely most of us (past and present members included) came up with solid DIY backgrounds. I spent my teenage years in a small country town about 3 hours from Melbourne and used to organise all ages shows there while I was at high school. That experience I have carried through to the bands I play, the tours we do as much as I can and the bands I have helped tour in Australia over the years. A fair portion of our releases we have releases on Sweatlung which was essentially started to release Whitehorse material. I feel like it’s more rewarding experience over all if you give it all a go. How important are the relationships that you have built over the years through touring?

We really have a great time meeting people on tour. I have a lot of close friends that I keep in contact with that I met on tour. One of our past members on his first tour kinda struggled with the experience of what he called the “12 hour friendship” where you turn up in town, meet a bunch of people, develop a bond over common interests and the shared experience of the event, maybe crash on their floor, then get up and say your fair wells. But now days it’s so easy to stay in contact with people, so I never see these meetings as he saw it in the limitation of the 12 hours. I look forward to familiar faces, even the people I may forget after 2 years and thousands of introductions. Re-meeting people and hanging out is great fun.

You worked with the artist Jacob Rolfe for your album cover & tour poster. What was it about his work that drew you to him?

Jacob is an amazingly talented man. I first met him when Whitehorse played in Canberra with a band he was singing in called Throat Of Dirt. I have been following his artwork for a while and one day he posted the image that is now on the cover of Raised Into Darkness and I instantly messaged him and asked if we could use it. He is such a driven artist and produces beautifully dark and twisted images.

I am so happy to have worked with some amazing artists over the years with Whitehorse, Brent Stegeman who has done a fair portion of design / artwork for us as well as being an original guitarist and now a touring bassist for our European tour, Nicolas Mangan who’s collage was used on the 20 Buck Spin released 2xCD and will be on the front cover of the Fire To Light The Way / Everything Ablaze reissue 12″ which will come out in April with bonus Unwelcome Return and of course liner notes from Seldon Hunt who also did liner notes for our first ever release back in 2005. Michael Bukowski is another artist who has done a couple of t-shirts for us. Tom Void from Thrall, Glenn Smith too both great artist who have done stuff for us.. oh and Yeap (ex-Whitehorse / Kromosom / Pisschrist) has just done us a t-shirt design too.

If you had to describe your music as a meal, what kind of meal would it be and when would you serve it?

Left over and cold, served in the dark in desperation. What do you do for a day job?

I am a removalist, which I believe is a term only used in Australia, it sounds way more sinister than mover. I get to practice all sorts of grunts and groans and every now and then a scream when I am lifting heavy shit up and down stairs. It’s great.

What the difference between touring in Europe vs. The States?

Given that we are about to embark on our first ever European tour I would have to leave this response until I am more educated on the European experience.

What are you more excited for: Roadburn or MDF?

Both I am sure will be awesome but rather different experiences. I kinda wish we would be at Roadburn for more than one day, but we have shows to play and heads to crush. But yeah, there is no picking one over the other really.