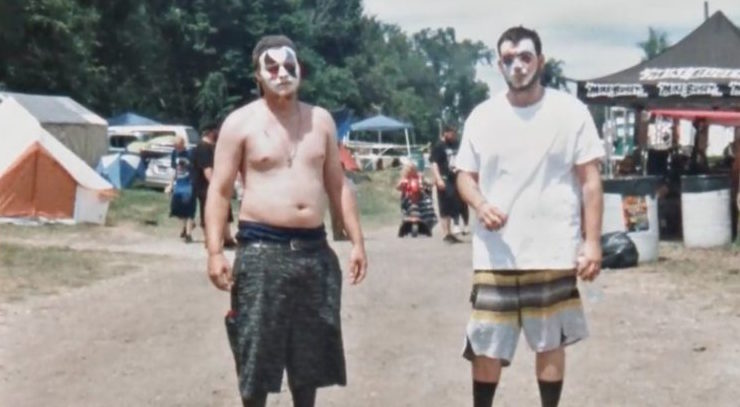 Once a year, the gently rolling fields of Thornville, Ohio play host to one of the world’s largest and most boisterous carnivals: the Annual Gathering of the Juggalos. The event is a convention for fans of American horrorcore rap duo Insane Clown Posse, whose attendees deck themselves out in cargo shorts, basketball vests, and blanch-white face paint. The Juggalos – categorised as a gang by the FBI – are mostly white, working-class men from disadvantaged backgrounds. Hard-drinking, the Gathering itself is a mash of exposed flesh, improvised boxing bouts, freestyle rap, and vape tricks. The Juggalos come to this stretch of Ohio not only to carve out a space where they can reign, but also – so it goes – to spray bottles of the soft-drink Faygo over each other.

Having recently returned from Thailand after finishing Krahang (a dreamlike documentary about a Bangkok bike gang that premiered on Dazed), Irish-born, London-based filmmaker and photographer Joshua Gordonfulfilled a lifelong dream to get close and personal with ICP’s cadre. The resulting film, which premiered last week on NOWNESS as part of their ongoing Scenes series, is an unexpectedly tender portrait of a much misunderstood community. We sat down with Joshua to peer beneath the facepaint of the Juggalos. You said you’ve been attracted to extreme communities for a long time. Where do the Juggalos fit into this?

Joshua Gordon: Juggalos are one of the most interesting contemporary subcultures. They never had the commercial recognition of scenes like punk, goth, and emo. There’s no Gus Van Sant film where the main characters are Juggalos in a small town. To me they’re one of the last subcultures that haven’t been commercially exploited in mainstream media; they’re truly underground and authentic and, to be honest, most people don’t know what a Juggalo is. A lot of people thought I was going to Ohio to make a film about gigolos (which would have been great).

How did the crowd respond to you making the film? Was there any resistance?

Joshua Gordon: People were mostly cool, maybe 95% appreciative of me being there. Being Irish and having bright red hair and tattoos definitely helped also – I blended in and just did my thing. I got involved and was camping with everyone, and didn’t leave the festival to go to a fancy hotel. I was a one-man team, filming, making connections and doing audio myself, which probably helped people feel comfortable around me. A couple of times I’d bribe people with cigarettes to let me take a clip.

This isn’t a sensationalist film. If anything it’s soft, even tender. Did you set out to make a film that didn’t just regurgitate their wild side?

Joshua Gordon: Yeah definitely, I never wanted to do something sensationalist and obvious. It would have been easy for me to make a generic documentary with people talking about drugs and prison. I’ve tried to approach my last few films in a tender way, but I’m not sure that will always be the case—it’s just the type of work I feel like creating now.