Watain are a proven commodity in the metal scene. They are arguably one of the biggest acts in all of metal, and their live shows border on legendary. They’ve had what is, for the most part, a strong body of work thus far, and their latest full-length album, Trident Wolf Eclipse, presents a return to form for the band, as well as a step in the right direction.  Their previous album, The Wild Hunt, had its moments of brilliance but was too commercially mainstream for most jaded metallers.  Still, it had its share of admirers.  Even the experimental but woeful track, Outlaw, from said album, had a lot of fans showering praise. Meanwhile, Trident Wolf Eclipse doesn’t cater to posers at all.

That is the case, in spite of some media outlets calling Trident Wolf Eclipse, “blatantly sellout.” I have no idea what they mean by this, in all honesty. Trident Wolf Eclipse shows a clear divergence from mainstream metal balladry and gimmickry present on The Wild Hunt. It is perhaps true that fans were expecting Watain to return to their more kvlt roots after The Wild Hunt steered them too close to pop metal borders, but expectations don’t necessarily translate to predictability, and Watain do themselves less a favor by writing music with fewer pop sensibilities if they merely seek to cash in.  Trident Wolf Eclipse is strong from beginning to end but is more suitably obscure than the catchy and obvious aforementioned predecessor The Wild Hunt. We at Cvlt Nation like the new direction.

They don’t make hits on this album, unlike some of their older albums did. Track one, “Nuclear Alchemy” comes close to doing this, but ultimately does a good job serving as intro track without being too catchy. Track four, “Furor Diabolicus” sounds somewhat similar to catchier older material but does so without sounding like obvious hackery. Ultimately, black metal is about anarchy and isolationism, which Watain’s personality as a collective does suitable tribute to, so it makes sense that the band return to roots explored in albums like Casus Luciferi and Sworn to the Dark – albums that are strong without having to invoke pop majesty to sound brilliant. Trident Wolf Eclipse adds to Watain’s legacy. It is evinced by the many subtly brilliant moments on the record that typify a band that has evolved and understood just how to craft albums both discriminating and less-discriminating tastes love in equal measure. It’s taken them only two records in their legendary discography to realize just what makes them special, and ultimately, even albums like The Wild Hunt that fail to live up to their name and potential, can’t be considered bad either.

The variance in tempos and moods is a great guise for the band’s new attempt at creating an album instead of a simple collection of catchy songs. Trident Wolf Eclipse isn’t meant to be listened to cut in half. It’s not front-loaded, and nor does it feature too much runtime like they’ve done in the past. The guitar tone is grittier, and the production captures the band’s sound tastefully devoid of too much studio polish, concentrating on the guitars and placing them in front. If it’s any fault of the production, vocalist Erik Danielsson’s voice is behind the mix a tad too much and makes the excellent lyrics harder to discern. It is a minor complaint and one that still gives the album a certain charm. Fans who claim Watain has lost its way with Trident Wolf Eclipse don’t know what they’re saying and can listen to more Metallica if it suits them. Watain already did “They Rode On” on The Wild Hunt, and it is only fitting that they ride on and go back to doing what they do best. 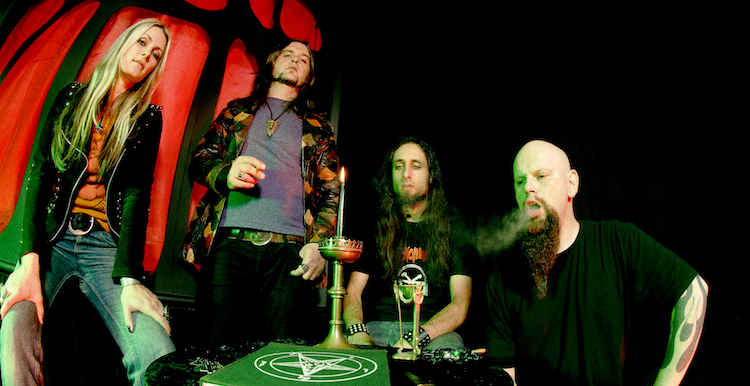 Ester Segarra creates epic and timeless photographs of some of heavy metal’s most iconic figures, and she has just published a beautiful tome of...

Now this is FUCKING all the way LIVE and all the way RAW. WATAIN killing shit in 2002 – now all you have to...

Music, Blood and Spirit: The Life and Work of Erik Danielsson Review & Preview

“We’ve done many terrible things, but it’s taken us to a place where we’ve become free men.” The above quote by Watain frontman Erik...