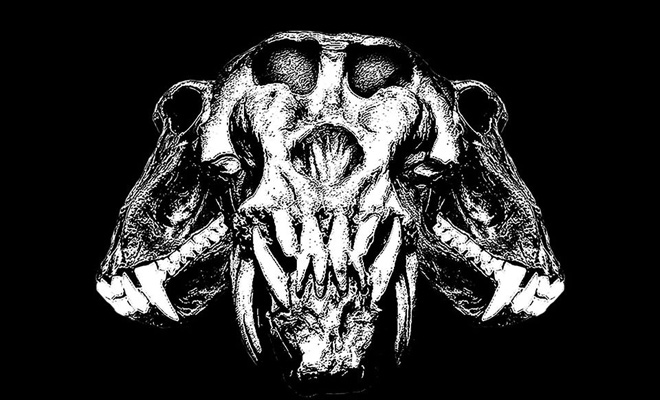 Trondheim, Norway, located at the mouth of the Nidelva river, is harboring a dark secret beneath its picturesque streets. A war machine has begun to quietly turn its gears. Preparing to unleash seething blasts of hate, in what could be a perfect soundtrack to mustard gas-filled trenches. Foregoing the musical style of black metal that has long been associated with Norway, Kaos SS have forged a nasty, explosive crust version of what is now being called “war metal” in some circles. This could have easily come out on famed punk/crust label Profane Existence twenty years ago, and even drew a first comparison to early Rotten Sound albums upon my initial listen. Even with that it mind, this release still sounds fresh and offers something new for fans of this prolific genre.

Not one of these songs breaks the two and half minute mark, so this should pretty much sum up what you’re in for. Fast, angry and downright pissed. While there are a few thrash-influenced solos and nods to past grind forefathers, Kaos SS should be taken at face value. What you hear is what you get with this band, and I mean that in the nicest way. No cheesy break downs or carefully constructed interludes. This band is all about being abrasive, nasty and in your face.

Each song follows the crust punk play book, with D-beat drums that rattle off like a Vickers Machine Gun, matched in turn by twin guitars that feed 7.7mm bullets through the speakers and straight through one’s head. Vocalist Mandrill should be noted here for having one fucking hell of an abysmal voice, which is evenly matched in turn by back-up shrieks from the rest of the band. There is never a point throughout these songs where Kaos SS forgets who they are or gets lost in some diluted attempt at doing something different. They know what they’re doing, and frankly, are very proficient in doing it.

Production-wise, for a self-released, recorded and mastered album, it stands up pretty well. It has the old school vibe, with a raw sound conjuring up images of Nausea ass-flaps and Molotov cocktails. The entire fact that Kaos SS members Zatek and Knegge have their dirty hands sunk into the recording and mastering process lends even more credit to the band. A reminder of the D.I.Y. crust ethic that has forged a path for a number of other bands and movements. Given a little bit of exposure and time, I could see these guys doing a fair number of tours with like-minded groups. All in all, this is a solid output from these Nordic punks. While this release is not reinventing the wheel, it definitely deserves a number of listens.