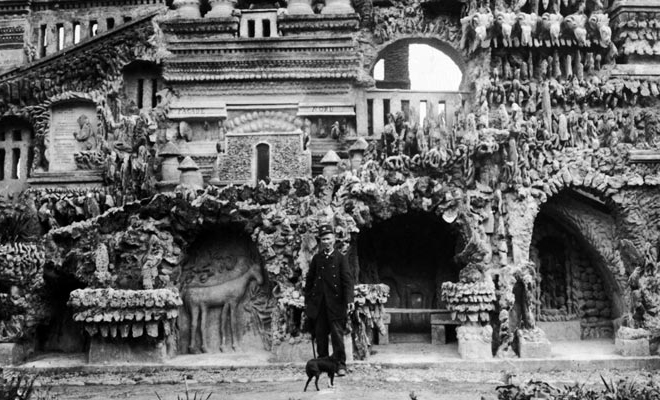 Ferdinand Cheval (1836-1924) was a postman by day and a pebble-dashing architectural artist by night. One day he literally stumbled on a strangely shaped stone, picked it up and took it home. From then on, if he found any stones he liked on his daily mail based wanders he would pick them up and take them home.

Ferdinand Cheval lived in Châteauneuf-de-Galaure, in the Drôme département of France. He left school at the age of 13 to become a baker’s apprentice, before changing careers to become a postman later in life. Here’s a quote from Cheval himself: “I was walking very fast when my foot caught on something that sent me stumbling a few meters away, I wanted to know the cause. In a dream I had built a palace, a castle or caves, I cannot express it well… I told no one about it for fear of being ridiculed and I felt ridiculous myself. Then fifteen years later, when I had almost forgotten my dream, when I wasn’t thinking of it at all, my foot reminded me of it. My foot tripped on a stone that almost made me fall. I wanted to know what it was… It was a stone of such a strange shape that I put it in my pocket to admire it at my ease. The next day, I went back to the same place. I found more stones, even more beautiful, I gathered them together on the spot and was overcome with delight… It’s a sandstone shaped by water and hardened by the power of time. It becomes as hard as pebbles. It represents a sculpture so strange that it is impossible for man to imitate, it represents any kind of animal, any kind of caricature.” For the following 33 years he built sculptures and buildings from the stones he found. “I said to myself: since Nature is willing to do the sculpture, I will do the masonry and the architecture”

He often worked by the light of an oil lamp through the night and carried stones around in a wheelbarrow by day. The Palais is a mix of different styles with inspirations from Christianity to Hinduism. Cheval bound the stones together with lime, mortar and cement. He wanted to be buried in his Palais but that was illegal in France so he spent the next 8 years building his very own mausoleum in the Hauterives cemetery. He died on 19 August 1924, about a year after he had finished building it. And there he now rests: