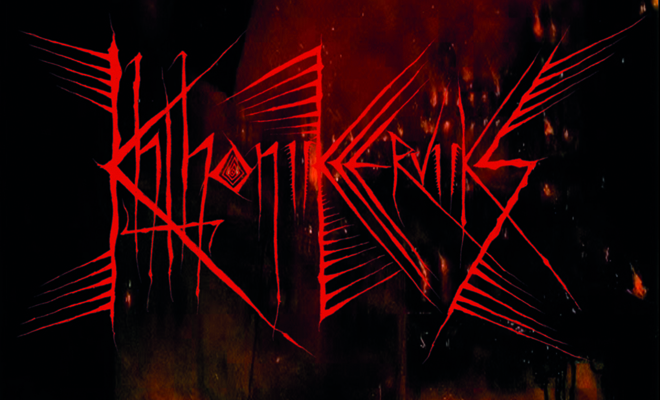 Iron Bonehead Productions has time-warped into the not-so-distant post-apocalyptic future to find a band playing in a desolate wasteland of human entropy, Khthoniik Cerviiks, and their ugly, primitive, fitting Road Warrior soundtrack, Heptaedrone, on cassette. Minions, rejoice! Ravage humanity with pride and play this fucker at full volume as this mysterious cvlt outfit weaves bestial black, death, 80’s thrash ala Pleasure to Kill seamlessly in a barbaric assault on the senses.

Khthoniik Cerviiks Exhalement starts things off with some blasphemous murmurs that sound like a man possessed whispering sweet x-rated nothings to the horned one. The Grand Sidereal Swindle starts the holocaust with some blasts and hoarse vocals, and Colliding Spheres Bend Solar Years blend some primitive riffery with crashing snares and cymbals. Some good songwriting is on-hand on tracks like sing-along bloodbath staple Elektriik Redeemer and Magmatiik Moil. After that, an eerie lead accompanies the main riff of track no. 6, aptly-titled Black Hole Neurotransmission, funneling into a razor-tipped Mitochondrion style circular wall-of-noise. Closer, Moraines of Molten Light, slows down after a spitting spoken-word psalm, sounding like subliminal mind control, just before the pace gallops with riffery rooted at the higher registers.

Fans of primitive bestial black death should eat this up. The guitars sound like little piranhas are gnashing at your eardrums, and the drums sound almost pawnshop quality – necro! Just the way cvlt fuckers love it.

The riffs are not-without a sense of melody, especially on the slower sections. The faster parts blitzkrieg up the upper frets of the guitars, reminding me of an unpleasant condition called The pin-and-needle sensation when the nerves of your feet feel like they’ve been caught in a vice-like grip.

The album is made up of seven tracks and never overstays its welcome. The band’s logo by the way, looks like it was etched on someone’s arm with the use of a razor. AAARRGH!

Just think. If the Mad Max trilogy were filmed with Heptaedrone as its soundtrack and the bad guys lent us their ultra-cool rides for a day, we’d be in our own cvlt Disneyland! Nothing against Mickey Mouse and his fellow rodent girlfriend Minnie, but paradise on earth has things blowing up and stuff! Thunderdome would have made a better Roman Coliseum!

Seriously though, if you’re not liking my attempt to put a visual image to the music, check this out and get a worthwhile addition to your tape collection now.