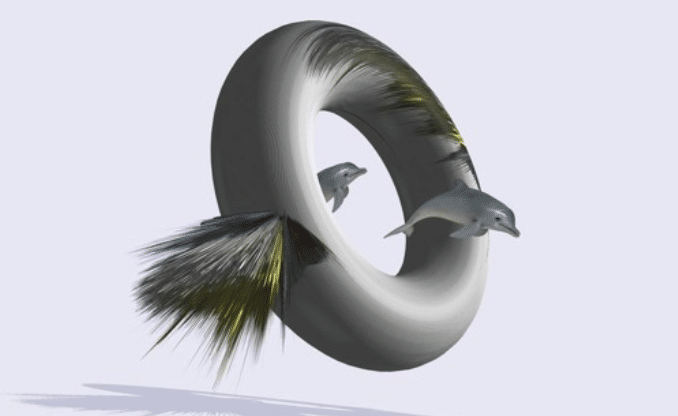 Digital times call for analog measures and when you’ve been obsessing 90s analog hardware for decades, you can burn the house down. Portland experimental synth outfit Elrond has done just this with their fresh new LP Love Across Lightyears which dropped today on vinyl, cassette and digital. This massive journey through space time is well worth the listen as the intrepid psychonaut inside you quests for the farthest reaches of the multiverse. Equal parts 2001: A Space Odessey, Tangerine Dream, and hard house, the duo takes retro synth into the postmodern day with utterly slamming samples, thick ass buzzsaws and hairy sequences, sometimes moving into high selector golden age disc jockey scratch land.

I can personally attest that this record could not be more true to their live sound except they often add video collages and homemade projections to provide wraparound sensationalism for every sensory input. Veterans of the noise rock and DIY electronic scenes on the West Coast, Elrond had this to say about their newest release: “Most of those songs were written for live performances, I think a primary influence would be the audience itself. A form to connect with the people we are playing for. The people in our community and the people we meet on tour and in our travels. The rest of the songs were written and inspired by when we were living pretty isolated in the desert. Reflecting on the very beautiful but empty, quiet, and remote surroundings of the high desert in Southern California I think we subconsciously wrote relatively minimal, but very heavy, and very loud songs. As for intentions of the album, I believe it is an end result of our goal as a band in general. Which is to bring as many different people with as many different art forms and mediums of expression together in the name of friendship. Love Across Lightyears is metaphorically and literally referring to our hope to maintain strong friendships and loving relationships with as many different people from all over the world!”

As is the norm in today’s contemporary independent music world, both of the geniuses behind this masterpiece have other projects both solo and non. Vern Avola is well known in the heavy psychedelic world for her work in Prizehog, and currently tour solo as AVOLA, and Eat My Shit (EMS). While other half Ian Gorman Weiland is well known for his work with Antecessor and Hot Victory. Thus, this synchronicity blends all the best synapses of the minds involved to launch their beloved fans on a cosmic epic they might never truly come back from.