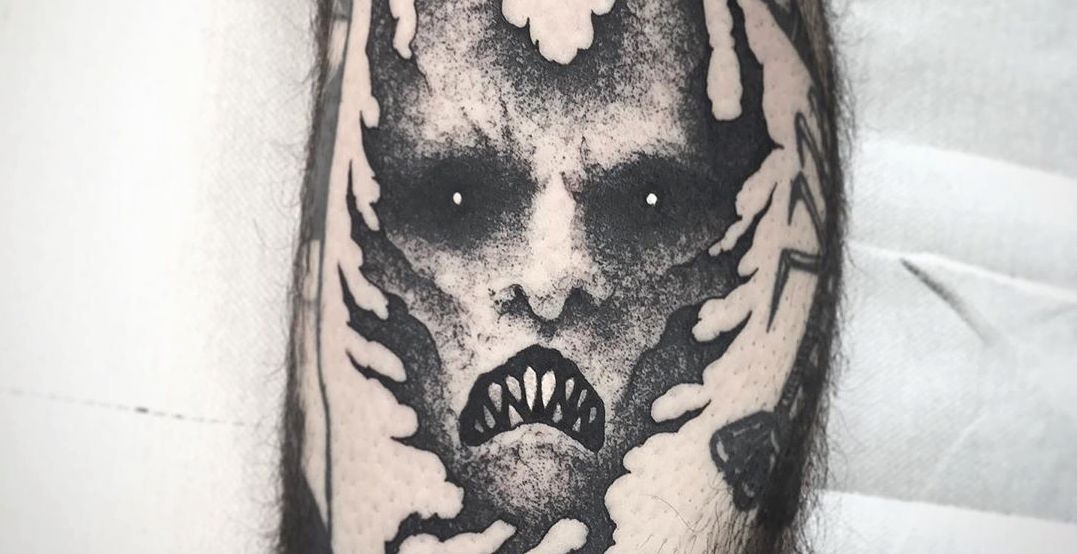 This feature was written by Serena Mazzini

The exhibition, premiered at the Berlin studio Das.Kabinett, is an invitation to considering tattooing as a ritual and not as a fashionable tinsel

BERLIN – Das.Kabinett is not a tattoo studio as we are used to imagine: it is very secluded, hidden behind a small white door, as if access were allowed only to those who know the way to enter a world of wonders made up of total black nightmares.

Inside work some of the best tattooists in the world, real masters in creating monstrous stories with skin and ink.

To welcome me there is Maldenti, an Italian tattoo artist who has lived and worked in Berlin for years.

His style is so unique that seeing any of his drawings it is impossible not to associate it with his hand. A universe of beautiful ugliness, imaginative and grotesque creatures and references to medieval aesthetics.

He tells me about Torso, a photographic installation that aims to make us think about the effects of social media on the tattoo culture.

“We live in a world of images in which we are all users and at the same time creators of something ephemeral. A sort of visual anesthesia, in which everything becomes superficial, meaningless. This also happens in the tattoo culture, or perhaps we should talk about “couture”, as the tattoo artist is now forced to bend to the dynamics imposed by social media, to trends and models that leave no room for creativity”, he said to me.

The other artists involved in the project are Nicola Fucili and Xandthedeath .

Both have a very strong style: what characterizes Nicola the most are subjects with vacant eyes from which it is possible to perceive a sort of spleen while Xandthedeath manages to preserve a sort of gloomy elegance and sensitivity in her brutality.

The process of creating of Torso was very hard because it was not easy to find 9 people without tattoos, who wanted to pose nude or semi-nude and with their genitals in evidence.

“Our intent was to create a project with normal, real people. Along with fashion comes the models and with them somatic, imposed, identical standars. But behind a tattoo there is more, it is an art form, not a form of fashion. What prompted us to create Torso is the belief that this is a way to show what is behind the tattoo, what for us are the most important things: art, patience, passion, pain, taking 50 hours of hard work for a drawing on a back, which is then seen online by very few people and disappears over a double-tap“, continues Maldenti.

In a world where art loses its value as a mere reproduction always identical to itself, where people now think of tattooing as an essential accessory to be socially accepted and to be cool on social media, which is the role of the tattoo artist?

Das.Kabinett thinks that the first step is to go through the liberation of bodies, let them scream against this oppression through unique tattoo-designs, carefully tailored to strenghten and exalt their shapes, to show their beauty, to celebrate differences and analogies.

TORSO therefore becomes a sort of initiation rite in which the 9 selected people were portrayed in a dark place, hands tied, faces hidden, muzzled and blindfolded, to summon the true forms of their bodies and make them appear on the surface. In the dusk the artists have glimpsed the phantoms of flesh and they have listened their wail, to grasp their desires, their regrets, their nightmares.

They have therefore drawn digitally on those bodies, with their hands guided by ancient spirits.

This is the result:

These Lovecraftian entities, designed by Maldenti, incarnate ctonic forces, something hideous and dreadful but somehow compelling and seductive.

Azatoth | The mindless, ravenous hunger of the emptiness within.

Shub-Niggurrath | The blind instinct for a hollow, endless breeding.

They are the embodiment of self-destructive principles, avatars of entropy. Their howling laughter echoes from the depths of our guts into the astral void.

Nicola’s introspective work, drags deep, dangerous thoughts from the rots of consciousness up to the surface.

These demons, born from the clash between rationality and emotions, in a momentary balance between the outside world and the internal abyss, witness with hatred the end of mankind and wait for the shadow to become it’s ultimate incarnation.

Xandthedeath’s survivors are dirty, ragged and tired. They have endured the trials of Love, Violence and Death, and they carry with pride the scars they have gained.

Defeat has not broken them down.

They represent human virtues, rebellious and undisciplined, unlike the values of classic heroism. They are Antiheroes, like us, you and I.