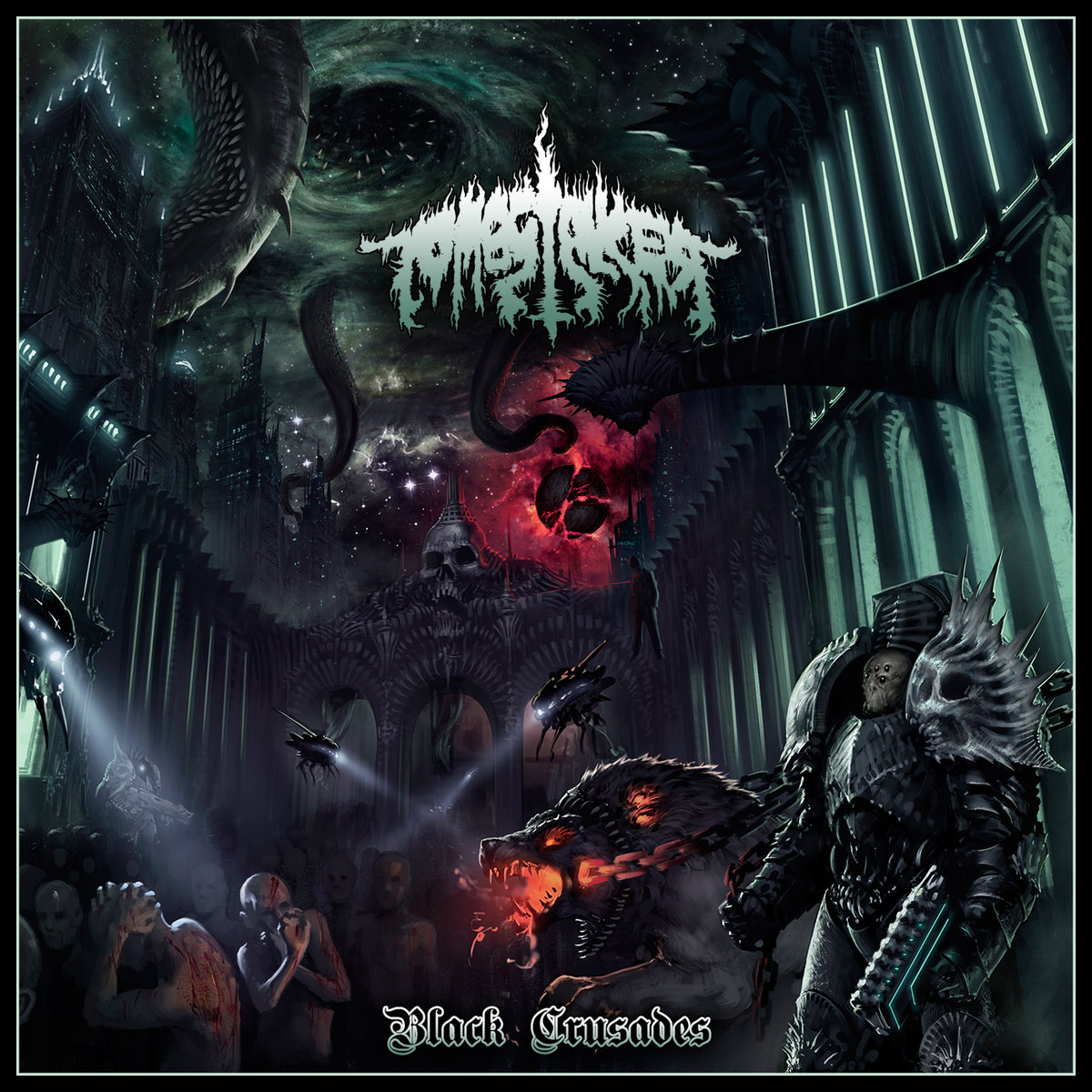 Steadily stirring in the black, murky waters of the underground over the last few years with a small string of demos and splits, blackened death crust merchants Tombstalker have at last emerged with their debut album Black Crusades – a veritable rising tide of chaos that wears many masks and tells many tales, but is, at bottom, the same grizzly, ferocious, bloodthirsty beast at heart.

Taking their cues from most notably (but not limited to) the early Swedish D-beat, Crust Punk, and Death metal scenes, Tombstalker succeed where many others have failed, and where a vast majority rarely even tread. Melting and melding the above references with traces of other influences spanning the Extreme Metal spectrum, Tombstalker present a style essentially all their own on Black Crusades that sounds both familiar and new – a record that instantly appeals, yet continues to hit you with surprise after pleasant surprise.

The introduction to this affair, for instance, isn’t the kind of beautifully crafted neo classical sounding intro you might expect from an album billed along Death/Crust lines, but it’s just that. Clean, and vibrant, “Forlorn Recollections” is a somber prologue that gives you a glimpse at all that will be left in the wake of this bands dark vision as each strum of the guitar pangs the heart and mind with images of abject pain and loss.

But before your mind gets too carried away with contemplation, your entire Being, with all its fabricated comfort illusions, are nuked out of existence by “Chaos Undivided.” An immediate HM2 crusher, this is the kind of proper opening track that initiates almost obligatory head banging and absolutely levels with wave after wave of ferocious, bellowing growls. Another thing that stands out is the production. Holy fuck! Incredibly clear, yet vibrant, every little sound that emits from this trio is captured but in a way that wholly gives justice to the gritty nature of the style Tombstalker employs.

Next, “Blood Thirster” gives you a heaping dose of attitude and forty two seconds into the song, an unexpected, morbidly melodic riff change that sweeps you away with its spell before Tombstalker reins things back in with a swift uptick in Death Metal punch that paints visions of a great Chaos God raining hellfire down upon all of creation with each and every decisive utterance. And it only gets better when you’re hit with a perfectly timed, punkish break at the 3:15 mark that catapults “Blood Thirster” forward with a hammering surge of energy, as Tombstalker blast you into complete oblivion with a 1-2 combo of high and low vocals that round out this explosive, yet well balanced attack.

“Fate Weaver” begins and is just simply a total banger, and yet, again, something more. By this point you’ll notice a trend on this album, namely that it always manages to buck whatever trend you think it’s following with a riff or break in the action that you didn’t see coming, usually in the form of a melodic twist not normally found in crustier Death Metal acts ala early Bolt Thrower and the like.

This is perhaps best displayed on the title track of this affair. For “Black Crusades” is an 8 minute long sprawling, monolithic endeavor of prime skill that best showcases Tombstalker’s song writing ability and overall grasp of dynamics. The first couple minutes of the song enchants you with catchy riff wizardry and subtle, but domineering escalations in tempo before you’re hit with a pulverizing breakdown at the 2:39 mark that will have you pumping your fist with the same sadistic glee espoused by the Tombstalker as they chant “BLACK CRUSADES! BLAAACK CRUSADES!!!” in ritualistic fashion, heaping praise upon the forces of chaos that seek to dismantle all in the name of uncreation.

Also, I’ll say that one of the best aspects of this album is colorfully displayed on this song and it’s the attitude with which these hymns of destruction are delivered. While very much serious in scope, there’s a certain personality to it that suggests this trio aren’t just soulless monsters indiscriminately wreaking havoc upon our universe, but that they are, in fact, relishing every second of it with the same sadistic glee I referenced above. This really adds something to the mix that goes beyond the notes being played and gives the album a kind of appeal you won’t quite find anywhere else. This aside, “Black Crusades” ends with a masterful, seemingly never ending display of lead work by front man Anton Escobar, as he intricately weaves our demise second by second with an ever-mounting cascade of fret tapping over the course of two minutes, that climaxes at the 7:34 mark with a crushing blow that ends this track with an exclamation mark.

Following this juggernaut, “Soul Eater” somehow is able to pick things up without losing any steam whatsoever. In fact, it’s possibly the best song on the record in some respects, if not easily the most melodic. But in no way is this a drawback, as it flows freely with its D-beat aesthetic looming, and providing the gritty backing that puts this track over the top. To this end, “Soul Eater” really is a marvel in its marriage of different, yet interrelated styles and a prime example of the bands ability to seamlessly touch upon varying scenes of influence without compromising their dark vision of the end.

Next, the carrion croaks of crows and the buzzing of flies opens “Plague Father,” a track that is simply seething with smite and irreverent prophesy, churning with Death Metal muscle, tinges of melodic fortitude, and well placed pinch harmonics. Another winner, it features some of the heaviest material on the record, as it weaves between towering riff destruction and blast driven fury with keen precision on its way to the monumental closing track “Chaos Enthroned.”

Bringing things full circle, this closing number gives fitting closure to the roller coaster ride that is Black Crusades as it succinctly progresses through its movements seemingly with ease, oscillating between hammer crushing D-beat fury and its more melodic, catchy hooks, as “Chaos Enthroned” is the kind of song you’d go absolutely mad over in a live setting. Twists and turns abound for 3+ minutes of pure head banging bliss, before Tombstalker deal you their most crushing and unexpected blow yet around the 3:35 mark as they kick things into a gear you might not have known they even had.

Penetratingly dark and grandiose, “Chaos Enthroned” reaches an ever-ascending crescendo of dismantling destruction that empowers and enthrones the darkest elements of the cosmos. With bells tolling in the back ground, Tombstalker save their bleakest for last in the form of 5+ minutes of total chaos and death that even brings acts like Demoncy to mind with its eerie, whispered vocal lines hanging distant.

As this horrific prophesy unfolds and reaches its grim finale, you’re left in utter shock and awe by the craftsmanship of Black Crusades and its ability to pack a multifaceted punch into a relatively short space of time in a way not many bands are capable of. In short, this record is everything you could possibly want and more, as Tombstalker have sculpted a unique homage to all that is old school with their own stamp and mark. Crushingly dynamic and hauntingly beautiful, the charm of Black Crusades is irresistible. Heed the call or perish by the wayside, it matters not; this death carriage is unstoppable and certainly a dark horse for album of the year in 2015. Full support for efforts like this that challenge the status quo and above all, enthrone chaos and death! Hails!

Advertisement. Scroll to continue reading.
In this article:Black Crusades, Tombstalker