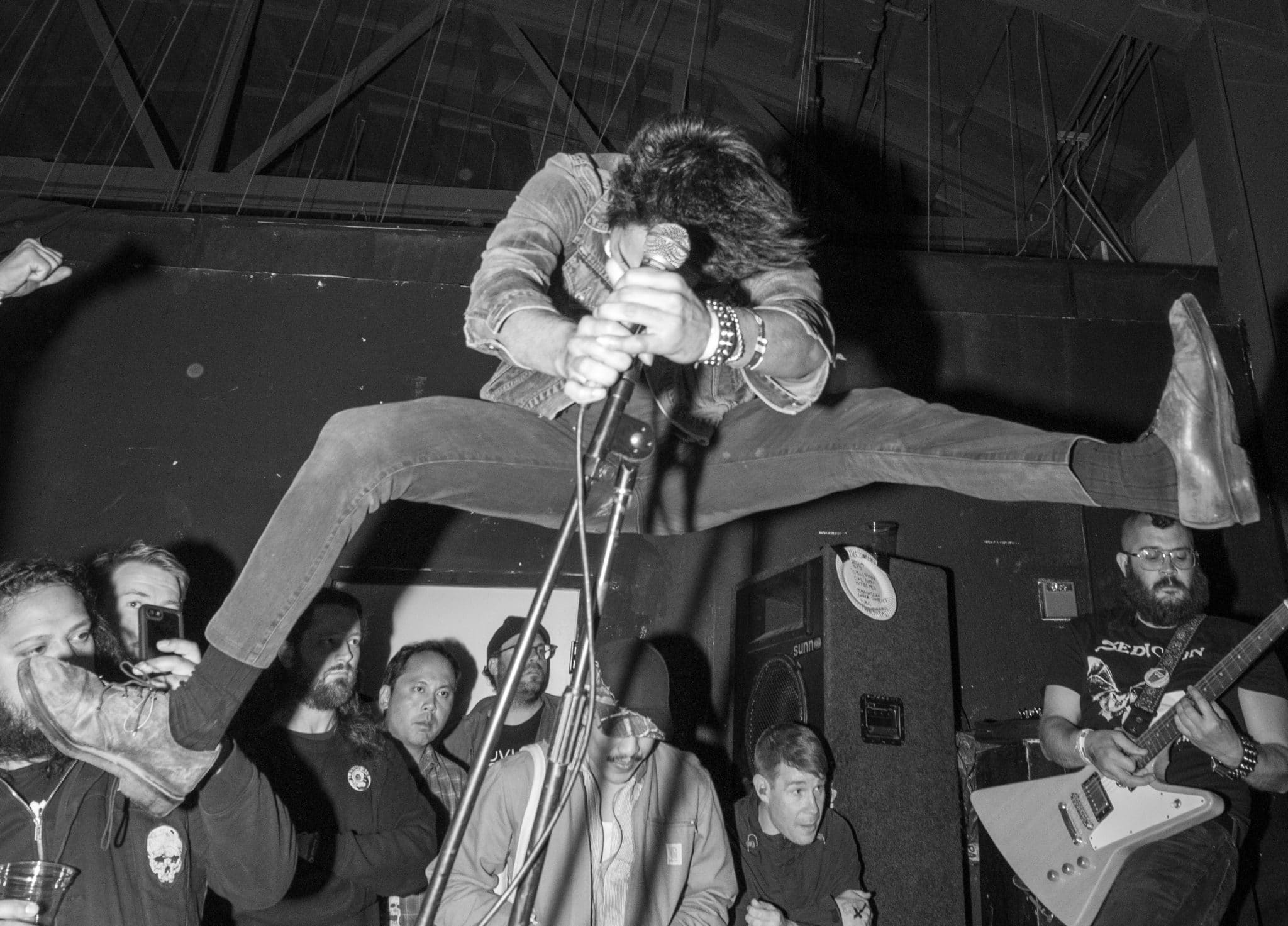 I have been using a variety of point-and-shoots since I was a young teenager, but I would have never called myself a photographer. I used the cameras mostly to take photos of when I was on vacation or was out in nature. And despite going to punk shows for decades, I never had any desire to take photos at shows until about five years ago. I had finally invested in a really nice camera and even then, I wasn’t really thinking about taking it to shows. But I thought I would give it a try anyway. After taking it to a few shows and being really happy with some of the shots I was getting, I decided to start taking it to all the shows that I go to. In some strange way, I fell into show photography, even though it was never really my desire or goal.

To truly answer this question, I must jump back to the mid-80s to when I first saw the Maximum Rocknroll photo zine “If Life Is a Bowl of Cherries, What Am I Doing in the Pit?”. It was all photos by Murray Bowles, and I was blown away by the energy and passion that he was able to capture on film. And his use of black and white photography really stood out to me. I continually found that when I looked at any punk zines or records, my eye would always gravitate towards the photos first (I still do that). As I mentioned in the previous question I kind of fell into show photography by chance. I figured I was already going to shows, I might as well bring this camera that I just bought with me. And from then on, I fell in love with live music photography. I can’t close out this question without mentioning how much that Murray Bowles photo zine influenced the black and white aesthetic of my photos and the type of energy that I am always trying to capture in my pics. It was a total subconscious thing with me. When I first started editing my band photos, I automatically switched them to black and white and my eye always gravitated to the energetic moments. Finally, one day I had an epiphany and realized I was basically modeling my photos after Murray’s. It wasn’t a conscious decision, but it definitely happened that way. I wish I had a chance to tell him that before he passed away.

Honestly, that is a really difficult question. I don’t know if I can tie my style down to one show, but I feel like the Manic Relapse Fest has been instrumental in really helping me expand my photography. The fest pulls together so many quality bands with people coming in from all over the world to attend and play. It just gives me so much material to work with. The energy of almost every band that plays the fest is off the charts, which in turn drives the crowd wild. So not only do I get to see a ton of killer bands, but I can easily fire off hundreds of photos capturing so many killer moments.

Locally, my favorite band to shoot is definitely Shit Coffins. They popped onto the scene a few years ago and just blew me away. It is a band of long-time punk musicians who really know how to push the energy level off the charts. Their live sets are short and ferocious with the band members losing their minds and jumping around everywhere. Beyond Shit Coffins, the list of bands I like to shoot is truly endless. Everybody from Ghoul to Limp Wrist moves me and my camera. Ultimately, if the band is moving me physically or emotionally then I try to capture something about that moment on my camera to share later with the viewer. Those moments are my favorite to shoot, regardless of the band.

Ever since I started going to punk shows as a teenager, I have been an “up front” type of person. I love standing right by the band to truly soak in the energy and passion that is going off all around me. That positioning puts me right in the mix now, except I have a camera in my hand. To me, it is all about anticipating when something is about to happen. A stage dive, a musician jumping in the air, or an audience member just going nuts. I just feel it about to happen and stick my camera right into the action and hope I get the shot. My biggest piece of advice for people looking to catch the energy of a live show is to take the camera viewfinder away from their eye and start shooting blindly or “off the hip”. Just poke the camera into the void and fire away. You may miss some shots, but you may capture the shot of a lifetime. And that is the fun of it all.

The venue is of absolute importance to my photos. First off, I find that the more established the venue is, the more rules there are about cameras. If I get into a realm where I need a photo pass or the band/tour manager approval just to get my camera into a venue I lose interest in trying to shoot the show pretty quickly. Plus, it is almost a standard rule that you can’t shoot with a flash in those types of places. I have shot at those types of shows before, but it really isn’t my favorite. On the flip side, if you give me a small venue with no bouncers and a wild energetic audience, I feel like I am at “home”. Those are the places where I can be right in the middle of the action and really capture the interactions and emotions of the band and their audience.

A few of my favorite local venues to shoot at are The Knockout and The Elbo Room. They are both small intimate venues with great bookers who pull in high-quality punk shows. And of course, I must give a huge shoutout to 924 Gilman Street. But frankly, while venues are great, just give me a backyard, a dingy basement, or a random parking lot. These are my favorite places to see and shoot shows.

Before isolation, do you think that you took going to shows for granted?

Absolutely not! I have always recognized how privileged I am to live in the Bay Area where there is such a strong scene and a stopping point of incredible bands from all over the world. I feel like it is so easy for people to become lazy and unappreciative when there are so many entertainment options happening around them. And I really hope that the absence of shows during the pandemic has made people realize how important shows are and how lucky we are to experience those moments in life.

My gut reaction would be that people, in general, would be cautious and slow to come back to shows, so there would be fewer photographers and audiences than I would have seen prior to the pandemic. But the exact opposite has happened. Since shows started happening again in the Bay Area, I have seen a massive rush of people showing up and more photographers than ever. People are totally starved for entertainment!! Two of the shows I have seen since shows started back up have had over 1000 people show up! These were totally underground gigs where the location wasn’t even announced until a few hours before start time. So wild!

During the pandemic, I was mostly concentrating on taking nature photos. I bought a massive zoom lens right before the pandemic hit. So, I ended up going out and trying to get some good shots of nature. I have gotten pretty lucky and got some great shots of a bobcat and some bald eagles over the last few months. It has been super fun! But now that shows are slowly coming back, I really look forward to pointing my camera at the bands and audiences again.

I have actually found myself going back through my photo archives. That has been fun because I have found so much stuff in photos that I missed the first time around. Prior to the pandemic, I was going to so many shows that I didn’t really have time to review every photo that I was taking. So, it was nice to finally have some free time to do that.

This photo was taken when I saw them in Tokyo back in 2020. I was lucky enough to see them in the USA back in 1996 but that was way before I was taking photos at shows. For years afterward, I had an incredibly strong desire to go see them in Japan. Finally, I made the trip over to Japan to finally see them on their home turf. They were just as incredible as I remembered! Nobody even comes close to matching the ferocity that Gauze brings to the stage. And it was well worth the expense to fly halfway around the world to see them. I will always cherish, that I have been lucky enough to see them twice (and actually document it the second time with photos)

This photo was taken at a very recent punk show I saw down in San Jose. Fentanyl is always super energetic when they play live, so I was ready for some action. When the singer jumped up right in front of me, I quickly dropped my camera low and shot the photo blindly. I honestly couldn’t believe my eyes when I got home and checked out the photo on my computer. It is easily one of my favorite photos I have ever taken. I absolutely love that you have a full view of the bass player underneath him! Totally lucky shot!

I love this photo for two main reasons. First of all, the insane perspective of the singer airing out behind the microphone still blows my mind every time I look at the photo. I mean, who jumps like that? Secondly, I knew zero about Noseferatu before I saw them that night. So, when they came out and kicked into a hyperdrive of 60-second thrash songs, all while the singer was completely losing his mind. I was totally blown away. And honestly, there are few things at a show that are better than being caught off guard by a mind-blowing punk band that you knew nothing about. 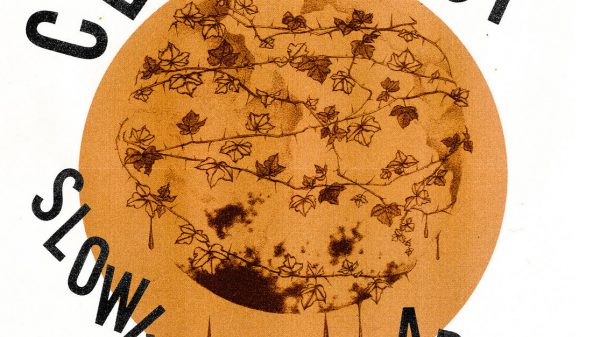 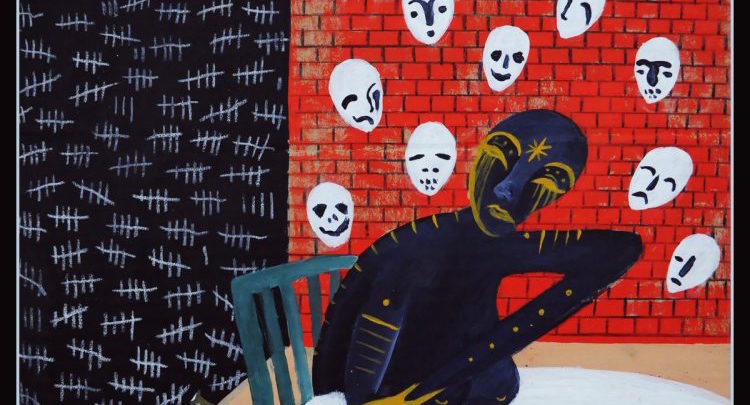 There are so many awesome bands out right now that it is hard to keep track sometimes, so CVLT Nation is here to save...