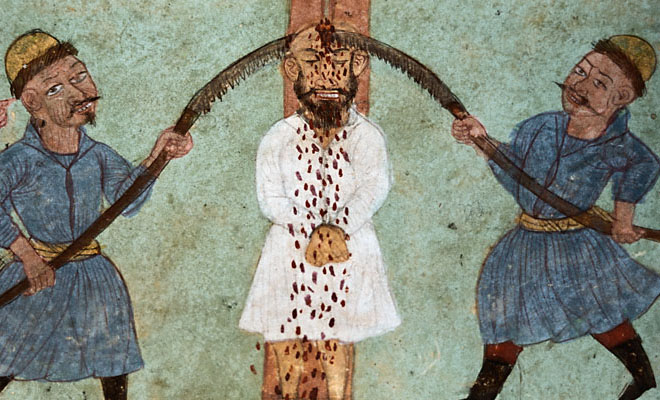 By Matthew Schulz via spiegel.de

Was the cradle of civilization also the birthplace of atrocity? Historians have been researching the most extreme forms of torture in the ancient world. Among other things, they have found that, back then, “sitting in the tub” was actually a pretty nasty way to kick the bucket.

In total, Julius Caesar reckoned that he had 1,192,000 enemies killed during his reign. Meanwhile the Emperor Tiberius would have young men’s urethras laced shut before force-feeding them wine. And, under Caligula, it became customary to saw noblemen in half.

It sounds bad — but were these the cruelest of them all? Would they qualify for the barbarity top 10?

A new book, “Extreme Formen von Gewalt in Bild und Text des Altertums” (Extreme Violence in the Visuals and Texts of Antiquity) by Martin Zimmerman, a professor of ancient history in Munich, looks at current research into the kinds of violence that inspired “loathing, dread, horror and disgust.”

Its conclusion? In the ancient Far East, where there were large states peopled by many different ethnicities, leaders demonstrated their might by inventing ingenious new tortures and agonizing methods of execution — as a way to keep the population obedient. The judges of ancient Babylon were particularly enthusiastic. The cutting off of feet, lips and noses, blinding, gutting and the tearing out of the heart were all standard punishments in this corner of the ancient world.

But the Assyrians seem to have been the masters of brutality. They were also extremely verbose about the grisly ends they wreaked upon their enemies. “I will hack up the flesh and then carry it with me, to show off in other countries,” exulted Ashurbanipal, an Assyrian king who reigned from 668 to 627 BC. And his heir liked to cut open the bellies of his opponents “as though they were young rams.” “The king was the deadliest,” explains Andreas Fuchs, a specialist in the study of the Assyrians. “It was he alone who decided what would happen to the victims. The ability to make those decisions was the very essence of personal, royal power.”

Shock and awe at such punishments permeated every dealing one had with the ruler. For example: “A message from the king to the Governor of Kaleh: 700 bales of straw. On the first of the month, at the very latest. One day late and you’re dead.”

Provincial governors who did not co-operate could reckon with the most horrible of deaths.

Flaying involved the delinquent official being staked to a peg and having the skin on his back torn off. Staking involved the executioner hammering a stake through the victim’s lubricated anus. The goal was to place the rounded, wooden stake so carefully that it only just pushed the internal organs aside. Many victims lived for days skewered like this. Most of the time these bloody and brutal pieces of theater were played out on the home turf of the conquered enemy. Artists immortalized the gruesome sights, the terrifying pictures serving as educational material.

The city-states of ancient Greece, meanwhile, tended to keep their torture local, in the frequent battles they fought among themselves. They rarely conquered outside peoples, perhaps a reason that violent visual propaganda isn’t often found on ancient Greek monuments.

In ancient Greece the blood flowed elsewhere. In Homer’s Iliad alone, 318 bloody duels are described with anatomical precision: teeth fly around, eyes leak and brain matter sprays. And the reality was hardly more appetizing. The tyrant Periander of Corinth gave his pregnant wife such a hefty kick that she died. His colleague Phalaris had a hollow bronze oven made in the shape of a bull — in which he could roast his enemies alive. In ancient Rome, rulers not only relied on crucifixions. Those on death row were likewise often sentenced to execution ad bestias. That is, they would be ripped apart by wild animals in the Colosseum. These were displays of political power — but with added entertainment value.

Researchers have also exposed the generally mild-mannered Persian Empire. Two Persian practices are often mentioned that had always puzzled researchers. Now, together with experts in forensic medicine from Cologne, the Basel-based historian Bruno Jacobs has managed to solve that mystery.

The sentence, “throw them into the ashes” meant that the candidate would have to stand for days in a room filled with ash. At some stage the person would collapse from fatigue, at which point they would breathe the ash in. Even if they managed to pick themselves up, their lungs would fill up with grey flakes sooner or later, resulting in slow suffocation. An 18th-century drawing of a public execution by saw in ancient Persia. Torture inspired “loathing, dread, horror and disgust” in a ruler’s subjects.

And the punishment of “sitting in the tub” saw the convicted person placed in a wooden tub with only their head sticking out. The executioner would then paint the victim’s face with milk and honey. Flies would begin to swarm around the victim’s nose and eyelids. The victim was also fed regularly and fairly soon, they would virtually be swimming in their own excrement.

At which stage maggots and worms would devour their body. One victim apparently survived for 17 days — he decayed alive.

As distant and heinous as these punishments may seem to us today, the issue of state-sanctioned torture to achieve political goals is still a current one. “Physical violence is a universal in all cultures,” the new history book concludes. “Whether we will ever see any improvement is hard to say, considering mankind’s history to date.” In this article:ancient, medieval, slider, torture