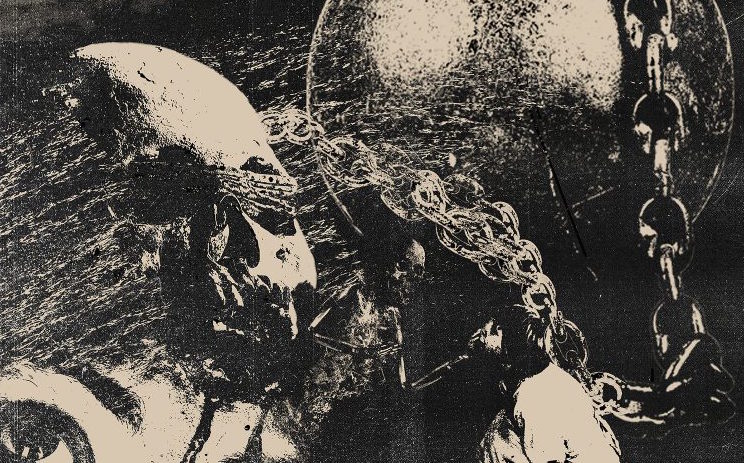 I almost find it ridiculous that I am here again talking about Primitive Man, and about how awesome them and their music are. No one ever likes to feel like they are a broken fucking record, yet here I am, again. I feel bad for those poor souls (do they even exist?) who still have not had the pleasure to have their lives ruined by the band’s music, and who will find out about them only now from this article, but here we are and here we go.

So what is left to say about these guys that hasn’t already been said a gazillion times before? I really don’t know. What I do know, is that no matter how many times I’ve said it, or thought about it, or heard it, it is still hard to put into words how heavy and utterly cataclysmic P-mane are. To this day, even now that they’ve been around for years, toured all over the world, that I’ve seen them and heard them play a million times, and that they’ve released a ton of music, describing the utter miserable crush depth of their songs, still today seems both hard, and challenging once again. This is perhaps why in one way or another a word for this band will always be spent, cause I feel that at the end of the day what these guys do still defies words, and is in some way incommunicable, so I’m just trying to find new ways to explain it to myself more than to others. That said, the dudes have a new album out on Relapse called Caustic, and “caustic” doesn’t even BEGIN to fucking describe the damn thing. Once again we’re set up against one of those things done by the band that seems larger than life… Over an hour long, spread across a 2LP, Caustic once again sees the trio teach humanity that suffering is REAL, that this life is mostly composed of suffering, that nothing is good, ever, and that our existence is a meager breath of air taken by A clump of  meat in the void of infinity, and that somehow, despite our insignificance, irrelevancy, and worthlessness in the face of an existence that is millions of eons “long”, and billions of light years wide, we, individuals, and human beings, just a few feet long, with just a few years to live, alive today, still always feel so fucking entitled, so fucking important, and so fucking proud of our foul organic deteriorating life as a heap of dying meat. If the “miracle” of life exists, it is damn right NOT the miracle of human life, that is for sure. Human life is anything but a fucking miracle, and I am thankful music and art as bleak and tortured and REAL as this one exists to remind us what our real and actual place in the plane of existence is: nothingness – a heartbeat in a night without stars bound for a grave with a fucking stupid cliche’ piece of shit writing engraved on it.

And so from this simply brutally realistic and no bullshit “storytelling” premise seems to have come another Primitive Man album. Once again, ELM’s screams just seem to endlessly scream out into a blind and mute void where no one is ever fucking listening, and one ever fucking cares, as the question is asked over and over and over again – why? Why do we needlessly, unexplainably always fucking suffer? This common obsessive thought will wind its way through the entire album like the binding thread that unifies it all, and in the end its girth will grow and grow and grow, and the bile will accumulate, and the frustration will intensify and rise, as the same simple fucking question goes again unanswered, time after time, as it is screamed again and again into the vacuous void of humanity and the only thing that comes back is nice smiles, and false beliefs that somehow anyone is important and anyone is a fucking “pleasure” to be around or is some fucking joke of a gift in existence. The disbelief and mortification in the face of existence is the most palpable aspect of the album. Like a slow, crushing, excruciating realization, this album crawls to its inevitable conclusion – as minutes seem like hours, hours seem like days, and days seem like years – just as it happens in the life-long false wait for something “nice” to happen to you. That’s why this band and their music seem so fucking real to me, cause within the wretched atmospheres and utter misery of the record I feel the struggle of every fucking unprivileged soul on this earth who’s just trying to deal with existence. And life is a slow death. It takes you slowly. It gives you false hopes and slows down the dying process, as a part of us clings to the idea that happiness might rear its head and come pet us and stroke us with pity like a wounded, dying animal soon to be carrion… Another stunningly fitting aspect of the album is just the sense of humiliating dread it conveys – with no riffs ever playing a single fucking catchy thing, or any kind of melody even remotely shining through. Its like every chord is begun to be played and feels grandiose but then ELM’s fingers move at the last minute and just ruin it all as if every fucking downstrum of guitar is a bitter realization, loaded with spite, unwilling to give back any kind of pleasure, hermetically bent on misery and completely incapable of opening up. I find a record made like this – of blood-curling howls lost in the darkness of the back alleys of mankind, shouting against a wall, of pounding, dirging drums, wandering off into a place to basically die, of guitars permeated by immanent disfigurement, and of inhuman baselines doused in abuse, ugliness and total dejection- to be just a spectacular representation of nihilism in our (modern) times. And through these astonishing eighty minutes of abandon, humiliation, resignation, and abuse in sonic form, Primitive Man don’t only tell you a story, but they tell it well, they take their time with it and pound it into you head, cause the only way to fucking escape this record is to turn it off. If it stays on then it means you accept and surrender, you can’t fucking interpret it however you want or make it make you comfortable, and as you let it guide you it will tell you a story of appaling misery and of real, crude, and hopeless survival. So when you feel the foot step down on your chest as you lay motionless on the floor and the riffs bury you it is the story being told, that’s when yo realize the album had told you so, that life is a shitshow of constant turning tables and that ending up the bug that’s about to be squashed is one of those tings that the vile universe will reserve for you without a shred of an explanation… But you feel so fucking important, and like for some fucking reason you should be spared, but existence doesn’t even speak that language. There is no other way to convey this realization of the vile nature of existence without tempos this slow, and of riffs so massively distorted, grotesque, and just fucking doused in nauseating hatred as these are. I feel like this band, and their album, have achieved something enormous in harnessing the utter blight of Caustic. This is a type of album that can be easily over-thought. For me it’s not about amplifier worship or the other mundane things like that. It’s about story telling and describing your surroundings through the sounds you hear in your head. That’s where in my opinion Primitive Man have triumphed with Caustic – for eighty something minutes I thought I was trapped in ELM’s mind and this should give an idea of the tremendous evocative force of this album – the mere fact the story of a human being was told, that it was real, and you saw (ehm, hard ) it all go down. In this article:Primitive Man, RELAPSE RECORDS