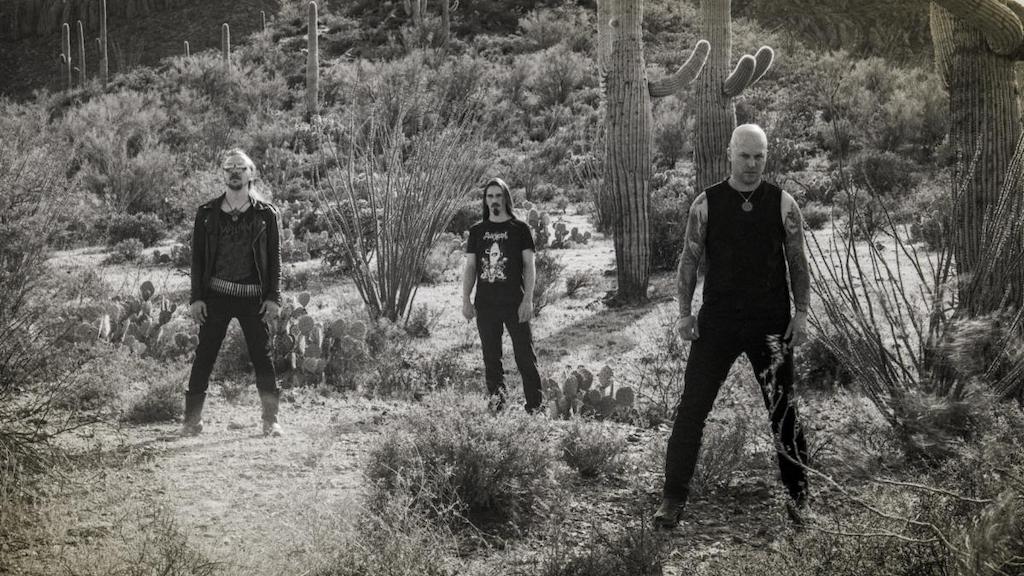 Devil With No Name is a new trio composed of members of other bands (Lord Mantis, Void Omnia, Sovereign) that were seeking to take the rebellion and devilry of Black Metal and put it into another context, namely the Arizona deserts. What we get is a debut four-track, self-titled EP full of epic and powerful Black Metal filled with the arid and dusty winds of the West.

“Grand Western Apostasy” starts things out with the heft and weight of the grandest of Dimmu Borgir compositions, minus all the orchestral clutter. It bursts into the speakers, belching fire, as big as a song can be. Three people are making this? Sounds absurd, but it’s true. It’s pretty much just straight ahead Black Metal, not breaking any rules or anything, but succeeding on its own strengths.

“Alleluia” is next and it has some definite Black n’ Roll going on, reminding me of Volcano-era Satyricon. It really swings, making you bang your head and shake your ass at the same time. Yeah, it’s “commercial,” but in all the best ways possible. It’s also grim and unforgiving.

“Sychophants of the Covenant” return us to the blastbeats and tremolo-picking blackness. This one is a sheen of darkness and you can almost taste the blistering hot Arizona night winds as it cruises forward. There’s something melancholy and lonesome going on here; maybe it’s the gothicky clean vocals or those weird background tones. The gallop in the middle though, that really gets the juices flowing. You can imagine the demon posse hunting down a soul escaped from Hell.

“Monad” closes the EP, returning once again to a Black n’ Roll sound. This one thuds along, in all the right ways, sliding in and out of elegant melodic passages just to keep things interesting

Devil With No Name have delivered what they promised, a Western Black Metal EP. Filled with demonic cowboys and evil spirits, it doesn’t ever sound like Country music, but it captures the atmosphere of the Arizona deserts and adapts that feel to the Black Metal game. This is a great introduction to an interesting trio. Come cross the evil, forbidden desert with them.