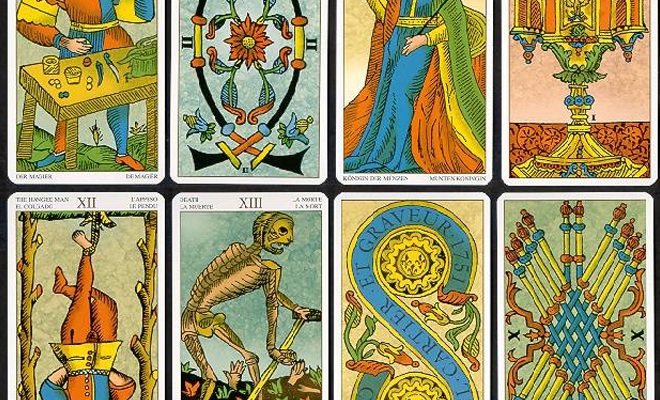 The tarot today is considered a tool for divination or of the devil, but the first known tarot decks were the playthings of the Italian nobility. The oldest surviving tarot are the Visconti Trionfi cards, commissioned in the 15th century by the Duke of Milan, Filippo Maria Visconti, for regular card playing. Later in the 18th century, the Tarot of Marseille became the most popular style of mass produced tarot, but the primary function for these cards was still for card games. It wasn’t until the late 1700s that tarot became associated with fortune telling and divination, an art that was practiced with both regular playing cards and tarot. Antoine Court de Gébelin, a Swiss clergyman and Freemason, wrote in his 1781 essay Le Monde Primitif that the Tarot de Marseille symbolism had its roots in the occult, and specifically in the Egyptian Book of Thoth and cult of Isis and Thoth – although this connection was later disproved by Egyptologists after deciphering ancient Egyptian hieroglyphics. Since that time, tarot cards have been reincarnated by many occult belief systems, including The Order of the Golden Dawn, to hold a high place in their rituals of divination and communication with the spirit world. Below find an assortment of tarot from Italy and France, dating back from the 18th century to the 15th century. Tarot de Marseille by N. Conver, 1760 but probably a Camoin (Marseilles) edition of c.1870 from the original woodblocks. Stencil colouring.

The [above] cards were also published as uncoloured prints in book form with the title “Giuoco di carte, con nuova forma di Tarocchini, intaglio in Roma di Guiseppe Maria Mitelli…”. The Ace of Coins has a portrait medallion with the artist’s name. Mitelli’s fanciful designs are a break from the earlier hand-painted tarocchi cards produced in Italy, but there are several instances where the decorative designs on the numeral cards and some of the Trumps remind us of other, earlier, packs of tarocchi or ordinary playing cards. The Trumps are unnamed and unnumbered. Cards from the facsimile edition published by Edizioni del Solleone in 1977. The Mantegna “Saturn” card (bottom left) allegorically shows an old man, maybe Chronos of Greek mythology, lifting a child to his mouth while other children await their fate at his feet. In his other hand, Saturn holds an Ouroboros, a small dragon or serpent biting its own tail, and a scythe. Time that devours its own offspring is a metaphor for “bringing to an end all things which have a beginning”. 8 cards from the replica pack “I Tarocchi dei Visconti” published by Dal Negro, Treviso, Italy. This is the most complete 15th Century Tarot deck. The original deck has 74 of the assumed original 78 cards, the missing cards are The Devil, The Tower, Three of Swords and Knight of Coins. These missing cards have been reconstructed in this edition.