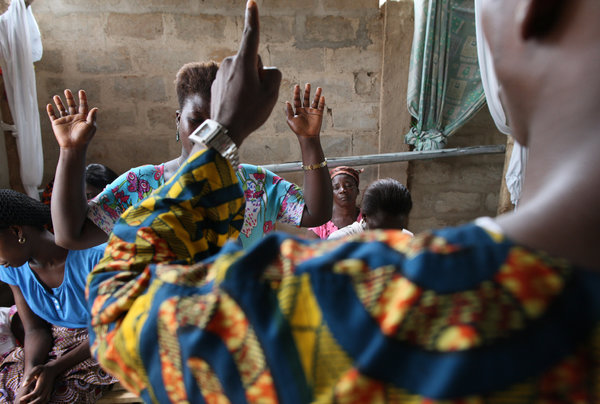 The west has a sordid history of persecution, much of it at the hands of various sects of Christianity. Some of the most disturbing events in history are the various witch hunts and witch trials that have taken place all over Europe and in North America, where women were tortured and executed by the thousands over a period of centuries. Well, today women are still being hounded by the religious, for being different, “evil,” poor and elderly, but now it is happening on the African continent. As the video below points out, sometimes these women are accused of being witches after a fellow villager sees them in a dream – as if they put themselves in that person’s mind in order to reveal their evil powers. In Ghana, there are “witch camps,” where accused women are sent after being banished from their villages because of accusations of witchcraft. It’s worth noting that Ghana is a highly religious country, with more than 70% of the population identifying as Christian, and only 5% identifying as atheist. Religion is a driving force of witch hunts, with the alleged witches being accused of possession or working with or fornicating with the Devil. Check out this disturbing article below that outlines the population of various witch camps in Ghana, including the fact that hundreds of children also reside in the camps, which often lack even the most basic utilities. As a former resident of L.A., I just keep thinking – what would the accusers do if you plopped them down in the middle of Venice Beach? Their heads would probably explode. Over 445 children are languishing in witch camps in the Northern Region [of Ghana] through no fault of theirs. They are the children and grandchildren of alleged witches in the camps.

As part of a reintegration process, 199 inmates, out of the 880 alleged witches in the six witch camps, have been successfully integrated back into society. This has reduced the number to 681 alleged witches, including 42 wizards and 445 children and grandchildren languishing in five witch camps.

Come Monday, the Bonyase witch camp, which hosts three alleged witches, will be formally closed and the inmates reintegrated. This leaves 678 alleged witches, most of whom are poor and vulnerable old women between the ages of 60 and 70 years. The Kukuo Camp in the Nanumba South District has 137 alleged witches, with 172 of their children and grandchildren. Out of these, over 66% of them are 70 years and above. Majority of the residents come from Bimbilla and its surrounding communities, followed by Napkali in the Zabzugu District.

The camp has no males.

Gnani-Tindang Camp in the Yendi District has a population of 273 alleged witches and wizards, consisting of 173 (80.4%) women and 42 (19.6%) men, and 231 children and grandchildren. Unlike the Kukuo Camp, this camp has both sexes, and there is no discrimination between them. Two ethnic groups can be distinguished; namely, the Dagombas and the Kokombas. Like the Kukuo Camp, majority (72%) of the population in the Gnani-Tindang camp are over 70 years old. The Tindan-zhie Camp (Kpatinga) in the East Mamprusi District has 40 alleged witches and over 100 children and grandchildren. Like the others, more than 70% of the population are 70 years or above. Nabuli Camp in the Central Gonja District hosts 140 women. This camp has no children living in it. In 2012, it was noted as being the newest and fastest growing of the camps. Similarly, Bonyase Camp in Gushegu has three alleged witches with no children. The Gambaga Camp has 88 alleged witches, with majority of the population above 60 years.

Communications and Public Relations Co-ordinator, Mr Kwesi Tawiah-Benjamin told The Finder that the conditions in the camps are deplorable, where potable water and food remain unaffordable luxuries. He said some of the inmates live in the camps with their children and grandchildren, who help them in their daily chores and small-scale farming. He stated that some challenges have been encountered in the reintegration process as community people find it difficult in accepting the women; as a result, it would require increased sensitisation by the private sector and development organisations to aid in the process.

According to ActionAid’s 2012 report into the practice of witch camps in Ghana, “accusations of witchcraft are a convenient excuse for the cruel treatment of women who are poor, excluded, different, or seen to be challenging the status quo.” “While both men and women can, and have been accused of witchcraft, women, and particularly elderly women, continue to be disproportionately affected by the crime,” Mr Tawiah-Benjamin said. He noted that the results of a monitoring visit to Ghana’s six known witch camps in 2012 by the Anti-Witchcraft Allegations Campaign Coalition (AWACC-Ghana) revealed a disproportionate number of older females residing in all of the camps.

He said the Ministry of Gender, Children and Social Protection, in collaboration with ActionAid, Ghana and IBIS Ghana, is hosting a conference to draw attention to some of the most vulnerable and prosecuted individuals in our nation — those persons who fall victim to witchcraft accusations. Under the theme ‘Protecting the Vulnerable: Witchcraft Accusations and Human Rights Abuse in Ghana,’ it is anticipated that the conference will draw national attention to the issue, providing greater understanding of the problem and garnering public support and action in discontinuing the practice. The conference, which will take place [on] December, 10, 2014, will seek to approach the problem through a gendered lens in order to draw attention to the ongoing human rights violations, and inequitable gendered power relations which continue to fuel the practice.

It is important to recognise that witchcraft is a problem disproportionately affecting women, particularly older females. Also at high risk are women and children with disabilities and mental health problems. Witchcraft accusations occur where someone accuses another person of causing some form of harm by spiritual means. Witchcraft is understood to be a supernatural power possessed by a person accused of being a witch or a wizard.

Whilst there is some acceptance within Ghana that benevolent witchcraft exists, witchcraft is generally understood as being an evil or destructive force used to inflict harm against another. The form which this harm may present itself may vary widely, with witches being accused of causing anything from heath failures, natural disasters and material or economic losses to social misfortune. Witchcraft accusations remain deeply concerning, not because of the belief in the supernatural, but because of the serious consequences arising from witchcraft accusations, including serious abuse – physical, economical and psychological, of the accused.

In Ghana, as in many other African nations, the belief in witchcraft is deeply entrenched. Although no comprehensive study has been conducted in Ghana to assess the extent to which Ghanaians believe in witchcraft, Adinkrah and Adhikari (2014) claim the beliefs to be widespread, stating that “in Ghana, it is estimated that over 90% of the population believe in witches and witchcraft.”

In this article:Africa, ghana, Witch, witchcraft