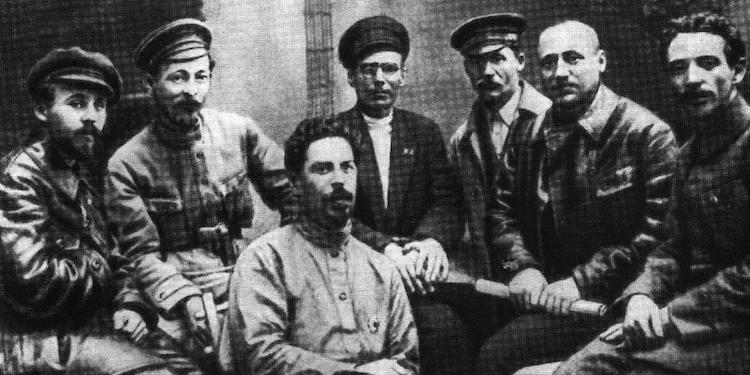 In our current times, certain presidents yearn for complete power. Some have achieved this already. Chiseling away at established checks-and-balances systems and boundaries of decency, some pine for the day when they see glory in derided systems of the world’s history. One established weapon throughout the history of dictators is a secret or state police. Empowered by the dictator, they are driven to extract information and eradicate any resistance to their leader’s power. The Gestapo may be the most popular – or most used in our current vernacular – but not necessarily the most ruthless.

“Peace, bread, land to the peasants” was the slogan of Lenin’s Revolution. The revolution was quick and relatively bloodless. But when they secured power, the wanted to establish their regime. Czar Nicholas and his wife and children were executed. Prisoners were freed. The press was free. The wick of democracy was ignited. And then it was snuffed. Lenin disbanded the parliament. Then, weeks later, the Cheka was formed – supervised by Lenin and a committee. Lenin declared, “The state is an instrument of coercion. We want to organize violence in the name of the workers.” Within weeks, 50,000 Civil War dissidents were murdered by the Cheka. Press censorship and death penalty were reinstated. Taking from torture methods rivalled only by Christianity’s Spanish Inquisition,* The Cheka was Lenin’s state police that were suppressing questions and challenges. Severity and efficiency were this force’s greatest weapons. The callous and savage methods reigned as The Cheka sifted through over 200,000 citizens’ bodies from 1918-1922.

“We stand for organized terror – this should be frankly admitted. Terror is an absolute necessity during times of revolution. Our aim is to fight against the enemies of the Soviet Government and of the new order of life. We judge quickly. In most cases only a day passes between the apprehension of the criminal and his sentence. When confronted with evidence criminals in almost every case confess; and what argument can have greater weight than a criminal’s own confession?” ― Felix Dzerzhinsky, nicknamed “Iron Felix,” was a Polish and Soviet Bolshevik revolutionary, leader and statesman. This period of complete suppression is known as “The Red Terror.” The Bolshevik Secret Police served as elongated, scythed tentacles of Lenin’s suspicions and orders. Leaving cadavers and rivers of blood, The Cheka extracted answers from its own citizens. The palpable abject fear paralyzed communities. The Red Terror lasted through the Civil War (1917–1922). (This is distinguished from the White Terror carried out by the White Army (Russian monarchists)) Rivalling any of the SAW instalments, The Cheka achieved new heights in torture. The human body was a malleable obstacle which they pushed until the soul inside was broken. The mouth was then utilized by the perished to relinquish any statements resembling pertinent information. Hundreds of Cheka Committees were established across Russia, led by Iron Felix – across Dec 20 1917 arrest torture and execute – Feb 6 1922. The Cheka stems from the full name in Russian: The All Russian Emergency Commission for Combatting Counter-Revolution and Sabotage.** Cheka’s focus was “defending the revolution by removing defectors” [4]. Lenin’s decree of the Cheka’s powers and parameters were intentionally vague. In 1918 – 1921, The Cheka held 200,000 members. Their favorite techniques are, but not limited to:

• Sawing through bones
• Crushing victims’ skulls in a vice
• Pushing citizens into furnaces or scalding vats of water (Odessa)
• Dousing people with water in the Russian winter to create human living statues (Orel)
• “The Glove” – boiling a suspect’s hand in water and peeling back the skin (Kharkiv)
• Rolling a suspect in a barrel lined with protruding nails (Varennes or Voronezh)
• Placing a rat in the cage against victims belly and applying heat; forcing the rat to eat through the captive’s stomach (Kiev)

“At Odessa, the Cheka tied White officers to planks and slowly fed them into furnaces or tanks of boiling water; in Kharkiv, scalpings and hand-flayings were commonplace: the skin was peeled off victims’ hands to produce ‘gloves’; the Voronezh Cheka rolled naked people around in barrels studded internally with nails; victims were crucified or stoned to death at Dnipropetrovsk; the Cheka at Kremenchuk impaled members of the clergy and buried alive rebelling peasants; in Orel, water was poured on naked prisoners bound in the winter streets until they became living ice statues; in Kiev, Chinese Cheka detachments placed rats in iron tubes sealed at one end with wire netting and the other placed against the body of a prisoner, with the tubes being heated until the rats gnawed through the victim’s body in an effort to escape.”[4] (Leggett, George (1986); pp 197-198)

And these were the specific horrific, applications of torture. That should not shadow the high number of straight and swift executions. The Cheka were ruthless in their extermination of who they deemed as counter-revolutionaries. The bullet was often the most decisive manner to utilize. There not many hangings or ceremonial incremental situations. Most of The Cheka’s horror was done in seconds.

“Executions took place in prison cellars or courtyards, or occasionally on the outskirts of town, during the Red Terror and Russian Civil War. After the condemned were stripped of their clothing and other belongings, which were shared among the Cheka executioners, they were either machine-gunned in batches or dispatched individually with a revolver. Those killed in prison were usually shot in the back of the neck as they entered the execution cellar, which became littered with corpses and soaked with blood. Victims killed outside the town were moved by truck, bound and gagged, to their place of execution, where they sometimes were made to dig their own graves.” [4] (Leggett, George (1986); p 199)