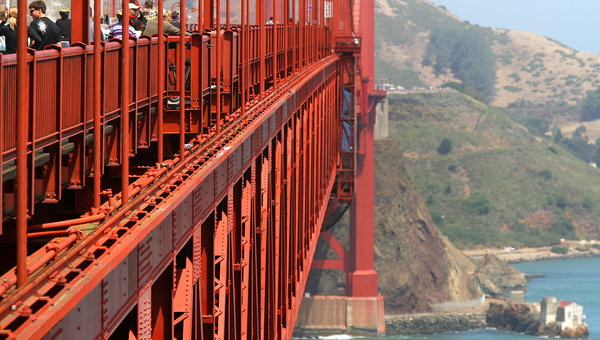 It is possible that as many as 1600 people have died by jumping from San Francisco’s Golden Gate bridge. To date, only thirty-four people are known to have survived the jump, all of them coming away with broken bones from the 245-foot, four second long drop into water that is also home to powerful currents and Great White Sharks.

The 2006 documentary film The Bridge documents a year in suicides from Golden Gate. It is composed of interviews with witnesses, the families of those who have died, even a few survivors – but what makes The Bridge uniquely powerful is the time and effort filmmaker Eric Steel and his crew put in to filming the bridge. They managed to film twenty-three successful suicides in total. Following this film and the efforts of suicide prevention groups, plus a lot of red tape, a $76 million dollar barrier will be put in place that should make jumping from the bridge nearly impossible.

Obviously, if you’re going through some stuff in your life right now then give this one a miss; but if not, and if you’re curious to see the dark side of one of the world’s most iconic landmarks, then press play.