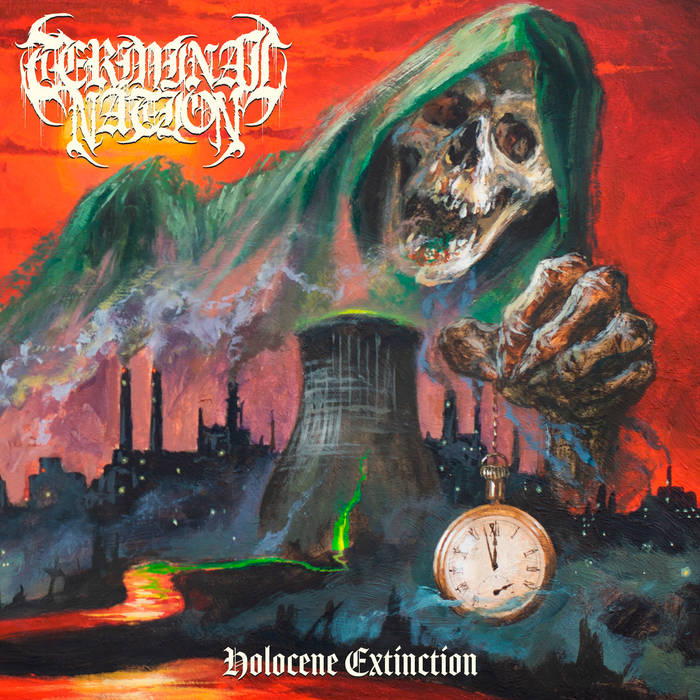 At a time when scientists are saying that no amount of money or technology will bring the ice back in Greenland; at a time when racists frustrated over losing their societal footholds are ready to incite civil war over their ignorant belief systems; at a time when war, famine, pestilence, and death are patrolling every man-made border, Arkansas’ Terminal Nation have constructed an album that, in addition to being one of the most powerful metallic hardcore releases in a year full of fantastic LPs, also addresses nearly every illness our country and our world face today. With full brutality and full sophistication, the band cuts to the root of every poison we’ve planted in our Monsanto-monopolized soil.

In his 1967 speech “America’s Chief Moral Dilemma,” Martin Luther King, Jr. identified three evils affecting America: “the evil of racism, the evil of poverty, and the evil of war.” Alternately listed as racism, capitalism, and militarism, it is clear to anyone reading that speech today that, fifty three years later, our society is more enmeshed in these evils than ever, and Terminal Nation is taking to task these evils and their every manifestation.

When Cattle Decapitation released their 2015 LP, The Anthropocene Extinction—an alarm call to the perils of turning a blind eye to looming environmental catastrophe—it was easy for complacent or casual listeners to chalk it up to another “on-brand” record by a band that has built a successful career by playing powerful deathgrind and decrying the injustices of the meat industry and its resultant environmental fallouts. In 2020, however, Terminal Nation’s Holocene Extinction does not feel theoretical or alarmist. Anyone who has a room with a view can see the very real likelihood that human extinction is peeking over the horizon. As the album brilliant album art by Adam Burke depicts, death is real, and death is here. While Terminal Nation, whose name seems more appropriate than ever, cries “Look! Look!” to every sin of capitalism and, more specifically, of America, it offers no solutions, it offers no hope. Though many are innocent, the system of exploitation is not, and we have made our collective deathbeds.

Presumably, there are plenty of wealthy, millionaire business tycoons who love the music of Woodie Guthrie or Bob Dylan, and lately we’ve heard plenty from people upset to find out that Rage Against The Machine and System Of A Down are political. Similarly, it would be easy enough for someone to love this release for its music without ever listening to the lyrics and the message. That’s defensible, as this release should easily find its way to the higher ranks of anyone’s metal and/or hardcore year-end lists. The band has put together a behemoth of an album, no matter what your political leanings are. It is a finely balanced mix of hardcore, death metal, black metal, powerviolence, and grind. It is a righteous golem, summoned from blood and bile, pus and spinal fluid. Their hardcore mélange calls to mind similarly pulverizing bands like Pig City, Beyond Pain, Racetraitor, Kruelty, Livid, Gulch, Year of the Knife, and Redbait while infusing it with new USDM like Sanguisugabogg, Like Rats, Gatecreeper, Undeath, Frozen Soul, and Creeping Death.

Although Holocene Extinction is gold on its musical merits alone, one would be missing out if they ignored the power in the band’s message: “Our country is sick, our world is sick, and there may be no turning back.” They aren’t looking for solutions, and they aren’t looking for redemption. They are saying, “The ship is sinking. Kill the captain.”

The album begins with the lurching, HM-2-driven “Cognitive Dissonance” addresses a world of propaganda and fake news, of a prevalent “fear-based way of thinking” and “outdated mindset.” This Entombed-core anthem calls out everyone who wants to celebrate the history represented by Confederate statues. History is being written every day, and Terminal Nation puts the question to the listener: “What side will you be on?”

Partner tracks “Arsenic Death” and “Holocene Extinction”–which call Obituary, early Metallica, and At The Gates, before moving into a gang-vocals breakdown that sounds like a slower Terror–rage about the irreparable damage human narcissism has created for the globe. “Holocene Extinction” asks the question, “How can we make the world a better place when we can’t even agree on what that means? When there’s so much hate towards those we share it with?” The listener knows these are rhetorical questions, and their answers may make no difference because, as “Arsenic Death” predicts, Human Extinction is a real possibility, as Mother Nature has no reason to show us mercy. After all, we’ve shown her none.

Terminal Nation tackle King’s three evils in each of Holocene Extinction‘s songs, as Capitalism, Militarism, and Racism are woven together in a symbiotic relationship to perpetuate oppression. “Orange Bottle Prison” is a boot-stomping, caveman-riffing diatribe against the reinforcing evils of the War on Drugs, the Opioid Epidemic, and the price-gouging capitalism of the pharmaceutical industry. The Judge-meets-Sepultura track, “Leather Envy,” point the finger at “bootlickers,” and after a minute of circle-pitting and roundhousing, the song invokes a doom chant: “Those who bow to their own oppressors are the weakest link in the chain of being.”

“Death for Profit” and “Caskets for the Poor” draw a narrow focus on the relationship between economic exploitation and endless war, detailing the way that poor people (especially people of color) are conscripted into wars to bomb other poor people of color in order to line the pockets of some chickenhawk who will never see a battlefield and who wouldn’t dream of having their children enlist. The blastbeats and breakdowns paint the picture for the lyrics “Fire in the sky and blood in the streets,” and guitars tremolo under the dual barks and shouts that command you to “pledge allegiance to perpetual war and the flag that blankets the caskets of the poor.

In case it needed to be made clearer for any listeners, track four essentially serves as the album’s thesis statement, as a keystone that holds the album’s arc together. “Master Plan,” a death-doom-via-hardcore track that channels Primitive Man and Earth Crisis, spells it out: “The system isn’t broken. This is exactly what it was always meant to be.” These environmental and societal problems are not side-effects or symptoms; they are themselves instruments of class war that maintain the status quo by exploiting the poor as well as nature and its resources in order to further enrich those who have never gone without.

The brass-knuckled conclusion of this treatise on human error is “Age of Turmoil,” a song whose barking-knuckledragging verse and chorus can be literal or figurative. The lyrics draw pictures of some promised utopia, viewed through the links of some cage, perhaps by some animal, or perhaps by some child, imprisoned at the border of a country that claims to value freedom. More pointedly, the “¡No pasarán! refrain is directed to all who live here. It tells us that we are all stuck in an invisible prison, believing we are free, believing that the oasis painted on the wall of our cell is the real thing, and never bothering to try to escape.

2020 has been generous with excellent death metal releases, and it is no hard task to find excellent hardcore with powerful socio-political lyrics. Holocene Extinction is a masterful combining of the best that these genres have to offer. If metallic hardcore had a university, this album would be taught in graduate school, which is fitting because it is likely that metal and hardcore bands will be studying it and incorporating it for years to come. That is, of course, if we last that long.

Holocene Extinction is out through 20 Buck Spin.

Mastered by Brad Boatwright at Audiosiege.