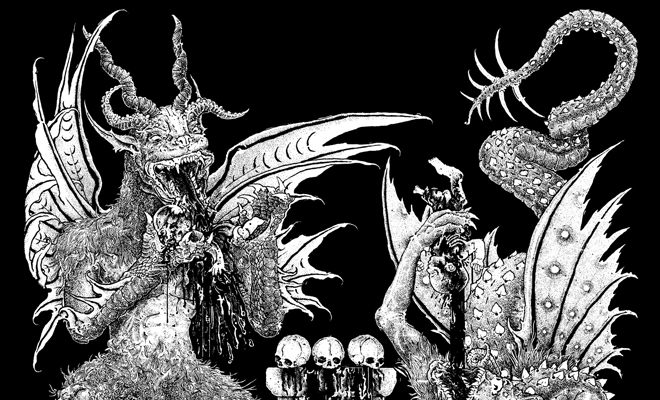 Iron Bonehead Productions does it again. Searching the world over for the filthiest recordings in the underground, they deliver another strike to the heart of the metal masses. This time, with Poland’s Temple Desecration and their two song MLP, Communion Perished.

The first thing you hear when you play the record is a choral chant of “Magnificat,” then some demented old witch enters the fray, and the vortex of guitar riffs and blastbeats erupts.

The vocals are absolutely bestial, and the guitar tremolo riffs and shreds in a virtual whirlwind of darkness, summoning up hellfire from all seven accursed churches.

The riffs stick after a while. The shredding is particularly memorable. The band makes use of atmosphere the way tornado hunters track down the trails of category five tornadoes. The playing is just good enough, sloppiness giving the album some of its charm. The whole anti-technical thing is making a statement here. Played live, the guitar strings will reek of old rust as the riffs wear them out.

The production is fitting for an MLP. You might not hear a whole lot of the beats, but you know they’re there when the pace picks up and the cymbals clatter like the bells of war.

The slower doom sections are destructive. Play them in a club and the guitar slides will send the walls crumbling to the outer reaches of the richter scale.

The breakdown at the end of the album is an absolute mosh-fest. The band seems to have captured the riff that ends all life on earth as we know it before the final blastfest. After that, the damn old witch ends the album on a high note, sounding like she’s being led to the dungeons before she’s to be burned at the stake.

This MLP is only two tracks long, but is highly addictive. Buy your copy and support some of the finest releases in underground metal from a label that means business.