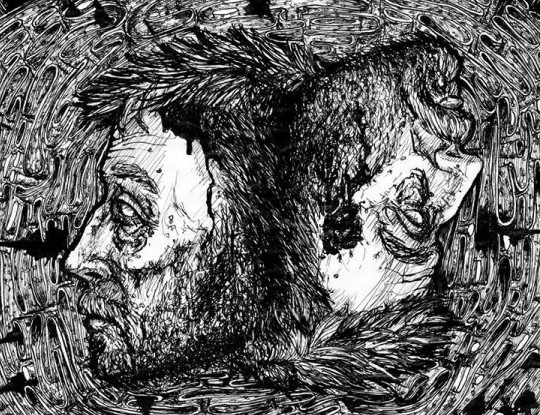 Nicky from Nothing interviews Doug from Pyrrhon

So right away, excuse me for being a bit out of touch with some of the current metal stuff and tagging you along with bands you most likely will completely disagree with like EVERY interviewer ever. I hear some hints of Morbid Angel and Death, but also some massive soundscapes like Michael Gira had been involved with. Who cares what I think though? What are some bands you’d say help shape Pyrrhon’s sound?

You actually hit the nail on the head there. Dylan (guitars) and I are huge Swans nerds — we kinda imposed them on Alex and Erik over the past few years, and now everyone in the band is a fan. Noise rock and the stuff that evolved out of it, like all that dissonant hardcore from the late ‘90s, are big influences on us in general. We also draw on jazz and ‘70s prog a fair amount, especially for the improvisational side of our sound. Mahavishnu Orchestra and King Crimson are consensus favorites of ours. There’s a bunch of the obvious metal stuff in there too: Immolation, Gorguts, Dodecahedron, Today is the Day, et cetera. I used to play in some hardcore bands when I was a kid. I always had problems screaming from my head and I’d have massive migraines and spells of nausea directly after my sets. I seen you suffered an injury from all the yelling as well. Care to explain?

Weird that you should mention that headache thing — I used to get that sometimes too. I heard recently that it’s caused by muscle tension that screaming with improper form can trigger. Fortunately it never happens to me any more, because like you said, it can hurt really bad.

My injury was a little different. I basically flailed around too aggressively onstage and gave myself a sports hernia, which is an obscure injury to the abdominal wall near the groin. It’s apparently pretty hard to diagnose; I saw a bunch of specialists who couldn’t sort out my symptoms after it happened, and I basically ended up diagnosing myself. Weirdly, the reason I thought to look into sports hernias was because I remembered Donovan McNabb getting one in 2005 and the team having a hard time figuring out what it was or how to treat it. Definitely the best thing that’s come out of my long-time Eagles fandom, haha.

Anyway, it’s hard to say whether I hurt myself by yelling, by flailing around, or by a combination of the two. Fortunately, NYC is home to one of the only sports hernia specialists in the world (though there is another in Philly), so it was relatively convenient for me to set up a surgery to fix it.

Doctors give you any good drugs?

I got Vicodin, which actually kinda sucked as it turned out. It didn’t make me very loopy, and you can’t take much of it because the acetaminophen will destroy your liver if you do. The main thing I remember about it was that it made it really hard to poop. Fun fact: poop problems are bad, but they’re even worse when you have a healing surgical incision about three inches north of your junk. I saw you spent some time in Philadelphia. I had the misfortune to have been birthed and spent my whole miserable life here. What kind of misery did it bring you?

I’m technically a native New Yorker, but I went to middle school and high school in the Philly suburbs, and I went to college in the city proper. I consider it my hometown still. Ironically, despite Philly’s insane negativity and general grossness, I loved living there — there’s plenty to do, and it’s not so expensive that you have to kill yourself working to pay the rent the way you do here. I’m also just a miserable fuck by inclination, so the most irrationally self-loathing city in America was a match made in heaven for me. I wish I still lived there. New York is too crowded and expensive, and too many people here have “hope for the future,” whatever that is.

I won’t get too into the name Pyrrhon here but since it’s so familiar I’ll purge a bit. I deal with the same punishment when asked about the band name Nothing and it’s philosophical value, and while it’s not to be taken so literally, it’s pretty obvious I’m a very cynical being. Do you consider yourself to be an above-average skeptic?

Yeah, I’d say so. The band name is kind of a happy coincidence for us — it’s the product of a compromise with a band member who’s no longer with us, and I’ve never written directly about Pyrrhon the philosopher’s works in the lyrics or anything. But even without really thinking about the name, a lot of my lyrics end up focusing on deception and the way that our senses can trick us. I spend a lot of time wondering whether the amalgam of perceptions and feelings that I interpret as reality is actually real, so I guess that probably makes me more skeptical than the average. Either that or I just have my head up my ass.

Reading about the band and yourself, I repeatedly see a lack of trust in government and politics in general, and also in the words “the future of metal.” Let’s cut away the fat. How do you see the future for humans and life on this planet?

Okay, time to get real serious! Brace yourself for Negative Nancydom.

Here’s how I see things: as a species, we’re in really deep trouble. Human civilization has been expanding at an uncontrollable clip for generations, but it can’t keep doing so forever. The world is finite. We’re starting to see signs all around us that there’s no more room for growth. The environment is collapsing; wealth disparity is going through the roof; governments are having increasing difficulty keeping their constituents happy and pacified; huge and growing portions of the world populace are living in squalor and going to war over basic resources like water. Thievery, oppression, and deprivation have always been part of the human experience, but we’re in a unique situation now in that the only way to keep things from getting worse is for humanity to stop growing, which it’s never done.

And that’s the thing: our entire global civilization is predicated on the idea of endless growth. All of the incentives we’ve set up for ourselves encourage economic expansion, so our institutions are singularly ill-equipped to deal with this state of affairs. We’ve basically cut the brakes in our own bus. If there’s a convincing way out of this mess, I have yet to hear about it.

My best guess is that everyone in America will keep watching Honey Boo Boo on TV and bleating away on Twitter for the next few decades like nothing is wrong. One day, there will be a catastrophe or institutional failure of some kind that will be so big that nobody can really ignore the trap we’re stuck in any more. Then widespread panic will set in (hopefully with a cooler soundtrack than Widespread Panic), the government will come down hard with whatever security apparatus it has at its disposal in an effort to retain order, and things will deteriorate from there. I’m basically just trying to enjoy the comforts and diversions of 21st-century civilization as much as I can before the floodwaters start to rise in earnest.

Upon further reading, I found you’re somewhat of a musical journalist. I read you wrote a piece analyzing the industry and the writer mentioned it was Schopenhauer-like. Are you familiar? Arthur Schopenhauer argued that the value of life is ultimately negative because any positive experiences will always be outweighed by suffering, which is a more powerful feeling. What are your thoughts on bringing children into this world?

Philosophy was part of my curriculum as an undergrad, and though I never read a ton of Schopenhauer’s work, a lot of the people I did study were influenced by him and spent time responding to his arguments. So yeah, familiar, but not super familiar.

The children thing is kind of a delicate issue for a lot of people, which makes it hard to talk frankly about. For the reasons I outlined in my previous answer, I think that there are a lot of ethical issues associated with adding more human beings to the world as it exists right now. I certainly don’t have any plans to have kids myself. But at the same time, the urge to procreate is the oldest and most deep-seated desire that any living thing can experience; there’s no life without procreation. So I have a hard time really holding the decision to have children against anyone who’s emotionally and materially equipped to provide a good home for those children. Basically, I’m against procreating in principle, but in practice, I don’t go around yelling at my friends and family members for having kids, because what kind of asshole would do that?

The whole situation strikes me as really tragic, actually. Previous attempts to use social engineering to control population growth have produced absolutely appalling consequences for human rights; think of China’s one-child policy. The thought of a more severe version of the same policy applied to the entire world makes me sick to my stomach, but the prospect of humanity continuing to grow until civilization collapses under its own weight may actually be worse.

While we’re on literature, you have a song called “Baudelaire.” Has he been an influence on your writing? Have a favorite piece?

Kinda, yeah. Baudelaire was definitely an interesting figure. His most famous idea — that hideous or repulsive things can also be beautiful — is really important to me as a lyricist. The song in question is really more about that part of his perspective than it is about his work specifically. (Like a lot of people, I’m most familiar with The Flowers of Evil.) Those lyrics are also kinda gibberishy because of the way I wrote them — that was the second song we ever wrote, and I wasn’t that great at getting lyrics to mesh with complicated rhythms yet, so I probably wrote some of the words specifically so they’d fit with the riffs. I’ve gotten better since, I swear.

We’re touring through the South and the Midwest on our way to and from SXSW in March — tour starts on 3/7 and lasts until 3/20. Check out our Facebook for the dates. We’ve also written a bunch of songs for our next release — we’re gonna keep working on that, and we’re looking to put together some more tour dates for the summer and fall. I feel like a dick for not asking you the same question! Your interview just destroyed mine.