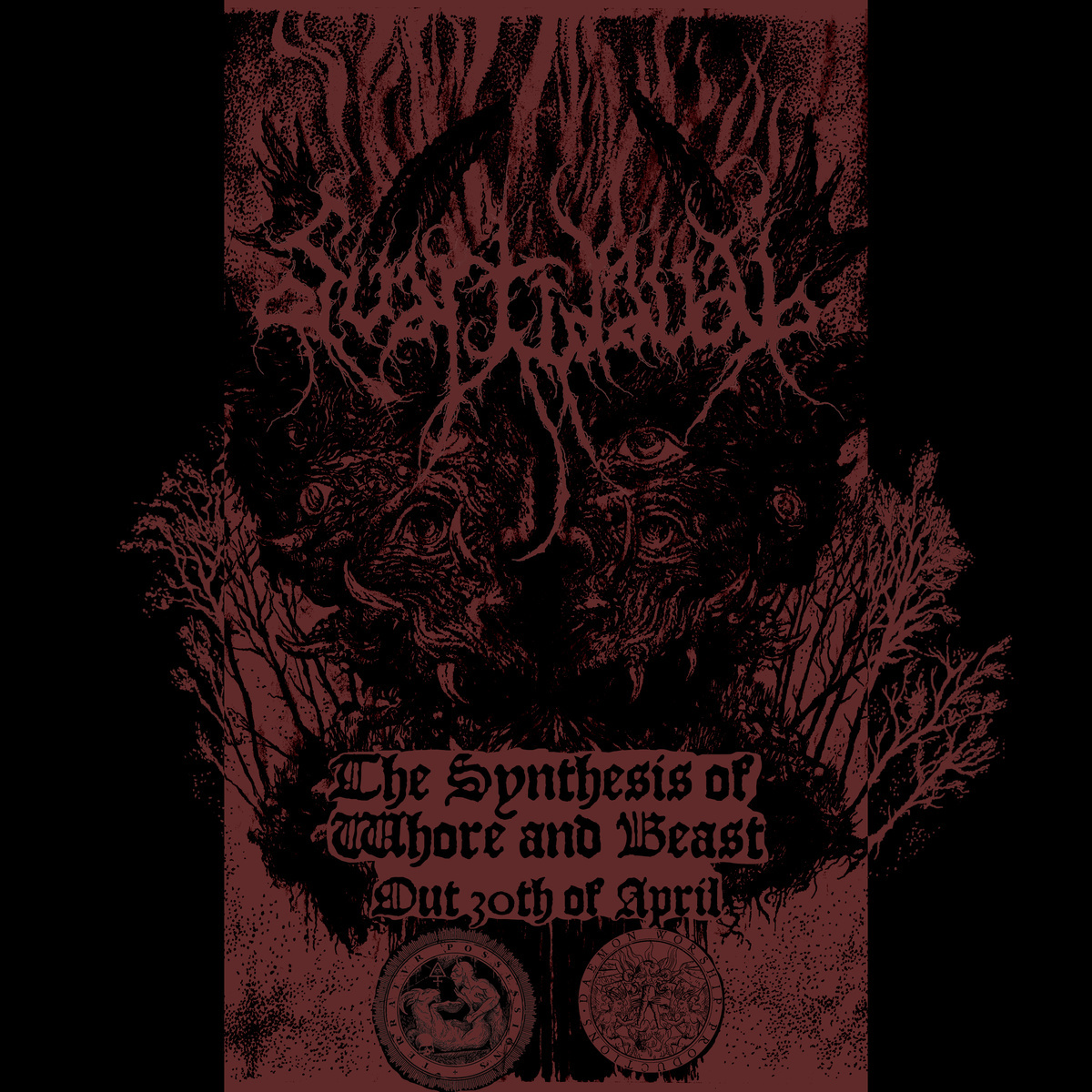 One of underrated label Daemon Worship Productions’ more accomplished bands is Svartidaudi. I’ve been following this band since the release of their impressive album, Flesh Cathedral, and this two-song EP entitled The Synthesis of Whore and Beast finds this orthodox black metal band continuing that trend of quality output. Many have compared the band to sub-genre progenitor Deathspell Omega, and those comparisons are warranted, but Svartidaudi’s sound on this EP features even more dissonance than their sometimes hectic debut, and reveals a conscious attempt at expanding their sound. The rung notes are everywhere, while the chord transitions make way for tremolo riffs and back again. Svartidaudi look to have improved their songwriting ability on The Synthesis… and it marks a turn towards less blasting and more demented melodies. There’s a fusion element to the some of the drumming used on The Synthesis… and the sound of the toms retain the classic Mayhem De Mysteriis template. The guitars really shine on this EP though, alternating chord progressions that add menace to the sound. When the notes ring out and the drums slow down, the dark atmosphere it creates is effective. The vocals are guttural, warped enunciations of lyrics focusing on depravity, the decay of morality. This whole concept of transmuted flesh in the mode of pagan worship has a timeless quality, and is a fitting one for the music. Svartidaudi have accomplished in two tracks what hordes of bands fail to do on full-length albums – make a noticeable impression. It doesn’t quite sound like early orthodox black metal, but sounds similar to Deathspell’s own aesthetic evolution in such albums like Paracletus and Drought, this time Svartidaudi opting for production that enhances the sinister atmosphere. It sounds like the perfect soundtrack to a parturition gone horribly wrong. The Synthesis… follows down DSO’s path to dissonant, progressive rock while sounding authentic. There’s a reason why few bands dare to tread down a similar path – because it takes a certain level of musical proficiency to create it. So many black metal bands have used pagan, folk and punk influences to create music that is largely tributary. While Svartidaudi may not have spearheaded black metal’s use of progressive rock influences, they certainly stand at the forefront of the movement, where few bands can match what so few have begun.