Can you breathe a frequency? I always thought that frequencies were supposed to be experienced by the auditory system. Maybe at best and at their most extreme forms being experienced through the skin, feeling your entire body shaking in their presence. But for Sunn O))) sound does not stop there, it is a force that should take over all the senses. Their music is not designed to simply perceive the frequency as something remote, their sound is something you ingest. It is with these thoughts in my mind that I entered Albert Hall, bracing myself for an overwhelming sonic experience. But, the introduction to this event was actually quite different and most welcoming.

Supporting Sunn O))) was the great Anna von Hausswolff, who had recently released an unbelievable record in Dead Magic. Hausswolff takes inspiration from a variety of sources, weaving a neoclassical facade with elements of darkwave while also exploring progressions initially exposed by krautrock visionaries. The setup on stage is quite interesting with Hausswolff and her band setting up in strange fashion, with both a drummer and a percussionist at the back, with herself and a bass guitarist at the front. From the moment they kick things off the performance is unreal as the mysterious pads of “Kallans ateruppstandelse” come through in minimal fashion. The slow moving rendition is deeply emotive and soothing, with Hausswolf’s voice cutting through to fantastic effect. However, it is what comes after that steals the show as “The Mysterious Vanishing of Electra” appears through the darkness. The standout guitar strums adds the dystopian twist and the initial clear and precise manta of “My feet are not enough” followed by the desperate line “to save me” echo through the halls. It is a moment of Swans-ian glory that reaches new heights as the chirping sweeps of Hausswolff take over, unveiling the full glory of this off-kilter opus. The ceremony continues exploring dark paths, as the epic “Ugly and Vengeful” unfolds its devastating presentation through the piercing mellotron voicing and the unreal delivery of Hausswolff. The drums and percussion build a ritualistic pacing, with the whole venue becoming the setting of an otherworldly, pagan-esque ceremony. The build-up is simply perfect, with the performance gaining more and more traction, becoming an all encompassing entity that fills the space with its majestic presence, while the lighting takes the shapes of crescent moons to accommodate for this unearthly experience. It all ends like as if in a dream, with the sudden awakening to the mundane reality as this exquisite trip comes to an end.

Anna von Hausswolff’s masterful performance has ended and it is now time for the headliners to come to the stage. There is a distinct sense of anticipation in the air, an uneasy feeling that finally ends when the smoke machines begin unleashing a healthy amount of smoke to the venue. Within minutes this smoke has taken over everything, as Stephen O’Malley and Greg Anderson make their way onto the stage, concealed in their black robes and with their guitars in hand. Cheers echo through the space as they both raise their hands in unison, ready to unleash the brutal weight of Sunn O))) with a single strum. After a few moments that single chord arrives and the descent down into the abyss begins.

There really is nothing that compares to the experience of witnessing Sunn O))) perform live. It might not be everyone’s cup of tea, but anyone that has seen this band on stage has to admit that in terms of sheer heaviness and brutality very few things can compare. You can take the most extreme grindcore band out there, the most brutal hardcore acts, the most technical and guttural brutal death metal band, squash them into a single entity and it would still feel rather mainstream compared to a Sunn O))) gig. The guitars take over everything, each slow moving note causes the whole venue to vibrate, and consider that this is under the new UK noise level regulations. The floor beneath you is shaking, while the glacial progression makes it appear as if time is at a standstill. That on its own creates moments of cosmic meditation, as you are exposed to something that can only be described as a force of nature not a man made effect or artifact. It is something much deeper and primal that Sunn O))) taps in with their live manifestation, as if it is the origin of all ceremonial procedures.

The extravagance of Sunn O))) oozes from the sonic domain and dictates the visual facet of the band’s performance. The smoke that pretty much covered the entire venue at the start of the set is further highlighted by the use of lights. Mirroring the progression of their music, these visuals are slow changing, remaining static for the majority of the time before slowly transforming. The manner in which they cover the venue feels like a humongous cloud has descended upon the Earth covering the visual field in its alien mists. The towering guitars appear as thunderous arrivals, as if a mythical storm is raging on and the audience is caught in the middle of this. Sunn O))) control this elemental force and choose when to alter its presence, through the light colours, but they also dial it down when a drastic change is imminent. The arrival of a trombone halfway through the set is such an instance, with its dissonant sound and free improv rendition causing a tear on the reality the band has been setting. Yet, following this fantastic interlude the return to the asphyxiating nebula is even harsher, the smoke returning renewed to cover everything. It morphs a solipsistic ambiance, making the individual feel isolated from the entire outside world, the rest of the audience fading away and the only thing that remains is the drone, the light, the smoke and the self. Time to lie down and take it all in. If that is not meditative then I do not know what is.

Photos: Pedro Roque One of these days, CVLT Nation is going to get our envious asses over to Porto in Portugal so that we... 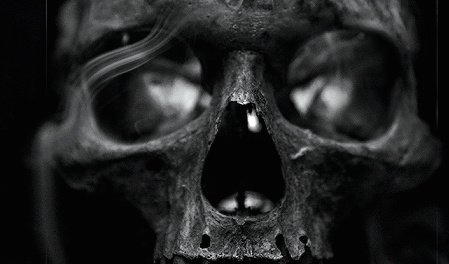 Mammoth, unrelenting, outspoken and absolutely, irrevocably heavy. These terms are just a fraction of what could be used to describe the very talented and...