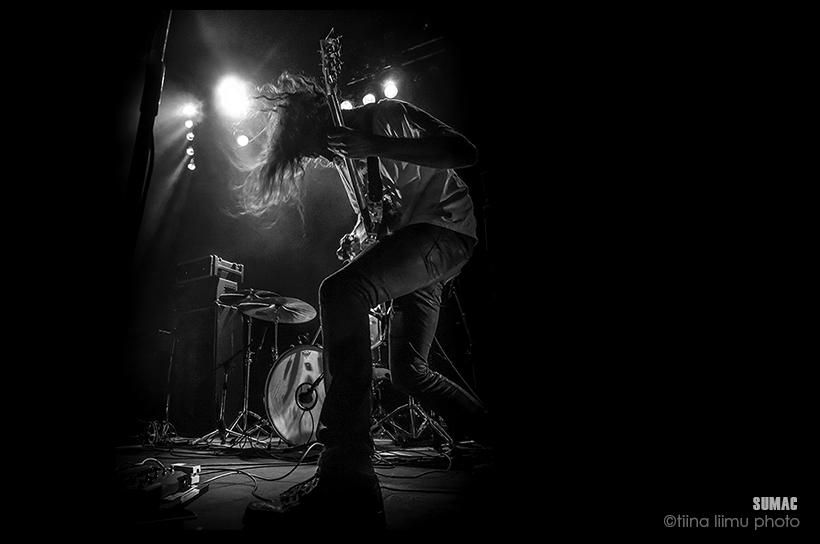 I’m not really sure when Aaron Turner sleeps, considering this man has been involved in a number of projects spread across the board over the last decade and some odd years. Sumac finds him in collaboration with Baptists drummer Nick Yacyshyn for the release of their first album The Deal, brought forth by the ever consistent label Profound Lore. It should also be noted that the backbone that is the bass portion of the album was laid down by Brian Cook of Russian Circles, Botch and These Arms Are Snakes. Add into this witches brew of musicians is the fact that it was mastered by Mikka Jusslla at Finvoxx Studios, tracked by Matt Dettmer (Wolves in the Throne Room, Sunn 0))) and mixed by the King Midas of metal, Kurt Ballou at Godcity Studios. So this is pretty hefty release already, just based on name association alone. But I know already what the skeptics and naysayers will be thinking or writing over the course of the next few weeks before this album launches: that this is just going to be another Isis / Old Man Gloom project, with no real difference in sound or content from Aaron’s other projects (not to take away from Yacyshyn’s drumming on this, but we’ll get to that later). So, let’s just be upfront and honest before we get into the meat and bones of the review. Does it sound like Aaron’s previous works? Yeah, it’s got his signature sound and voice all over it, but I mean, what else did you expect? The man has defined a number of projects just based on his guitar work and vision alone. The real question that you all want to know before you run out and purchase the album is if it’s any good. I can proudly stand behind the statement that yeah, this album is really damn good. One should set aside a giant chunk of time for this release, as each song is it’s own EP, really. A discovery is to be made behind every abrasive concussion of riffs and cymbal crashes that Sumac have created on their first output. While the first and last song are instrumental noise pieces, the four other songs are not just fillers sandwiched in there. Each song clocks in at ten minutes plus, so there is a vast landscape for one to explore with each offering. The songs themselves play seamlessly between each other, creating a kaleidoscope of sound and emotions. From the later dissected piece “Hollow King” and it’s chaotic mid-section, to the rather somber opening and thunderous explosion that is “Blight’s End Angel,” each song has its own texture and feel to it, but sounds completely organic and tied together.

As with most albums these days, especially those that trek across the unknown cosmos of what metal’s sound can be, the opening instrumental noise piece left me hanging on to it in a nervous, paranoid state before it slowly closes out and moves into the first song, “Thorn In The Lion’s Paw.” The song itself was released back in December as a earth-sundering tease for the album, but for those that haven’t heard it, I’ll go over it briefly. As this is the opening track and our first introduction to what is supposed to be a full time project, the song is a fantastic welcome mat for what one should expect within this album. Heavy, lighting-striking-on-the-side-of-a-mountain-like riffs, and drum work that sounds like typhoons crashing on the shores of a shattered coast. “Thorn…” aptly does it’s job of opening the album up and setting the tone for the journey that is The Deal.

“Hollow King,” the third track on here, jumps all over the place within it’s twelve and half minute run time. Starting off like a ancient war cry, Sumac summons the ghosts of the earth itself to awaken and take form. The song slowly builds up it’s crushing weight and intensity before it slides back into the noisy, black sea that Sumac have conjured. While listening to this the first few times, I kept being lulled into the sense that the song itself was over, as guitar feedback and acid jazz-like drums quietly seeped out of my speakers. My mistake was in not noticing how much longer I had left in the song, which is a lesson I took note of throughout the rest of this album after a few listens to it. Just a little over the half way point of the song, Sumac fucking explodes out of the noise-filled blackness, dropping an absolutely crushing five and half minutes of sonic elephants marching towards their graveyard. Which is pretty much the whole idea behind this project: to create a sense of crumbling concrete wall- sized heaviness injected with moments of wandering blindly through haze and into another world.

As a whole, this album falls in line with Turner’s earlier work with ISIS, specifically Celestial and SGNL>5, without sounding like he has been revisiting the past or retreading some previous moments of pulverizing glory. It’s without a doubt some of the heaviest material he has put forth as an artist, and that includes the most recent release by Old Man Gloom. For those that might have lost their way with ISIS during their later years, this is a definite return to form in terms of the audio barrage he has conjured forth from his guitar and cabinets. Not to be overshadowed, however, is Yacyshyn’s work on the drums, which undoubtedly is one of the best individual performances by an artist in extreme music in a long, long time. It tends to be with these slower projects that the drums are more downplayed and subdued, an accompaniment to letting the guitar work handle the big moments, as they lull one into a quiet contemplation before dropping the hammer onto you. This isn’t the case at all with Yacyshyn. The man has managed to not only create a solid companion piece to Turner’s guitar work, but also steals the spotlight at a number of points, such as in the song “The Deal,” where he inserts some absolutely fantastic, plodding double bass pedal work and fills. The man has the chops to expand what people have thought a drummer should and could do within a project like this. That being said, anytime a boundary is pushed within extreme music, I’m all for it. With Yacyshyn’s performance on this release, Sumac have done just that.

Overall, this album is an absolute stunner, chalk full of massive moments and daring peeks behind the curtain of noise that these musicians can create together. All in all, this is the first album of the new year that left me floored with it’s content and delivery. A definite, must not miss out on release that will be hitting stores February 17th via Profound Lore (pre-order here or here).