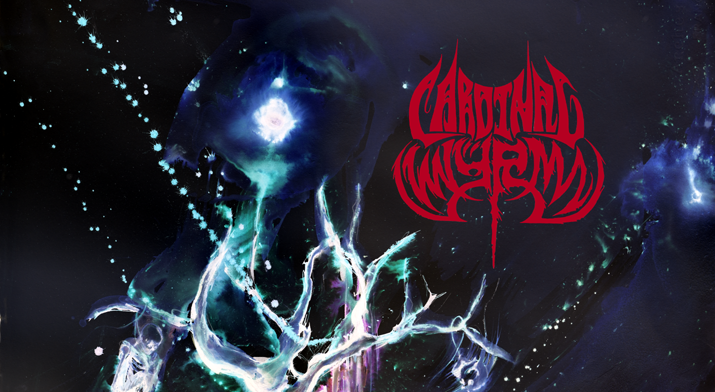 Sometimes you run into albums that are heavy and crushing, which is awesome, but not uncommon when it comes to doom. And sometimes – very rarely – you run into albums that are heavy and gnarly as fuck, but also weird you out for good, leaving you unsettled and confused. And that is exactly what happens when you sit down to listen to Cardinal Wyrm‘s debut album Black Hole Gods. You just get fucking creeped out by the band’s demented doom formula, and feel all kinds of weird vibes from it, which in this case is just awesome, because this record reeks of personality.

First of all, and at a first glance, Black Hole Gods is an awesome doom album. It’s got all the bells and whistles you would expect an awesome doom record to have: the riffs are great, it’s crushing, slow, psychedelic, downtuned, tortured, narcotized, and in general just tends towards total sadness and gloom. But on top of that, it’s WEIRD. Really fucking weird. Cardinal Wyrm’s music in fact has a very bizarre squalor to it. Their music sounds hysterical and out of focus, but determined. It sounds unstable and incredibly strange, but threatening. They sound like a band that is about to implode or collapse on itself, but also as if they are mocking you the whole time. Their melodies are tense and winding and the music feels like some kind of nervous breakdown is taking over the band and their music. It literally sounds like they are losing their shit and spiraling down a weird and disembodied path of madness. The problem is that you know that they are doing this on purpose, so they project their weirdness on to you. Their music is like a mirror that stares back. They play this hysteric and frantic doom that unsettles you. Makes you feel like you are getting sucked into their game and being “infected” with their unorthodox and bizarre craft. Drummer Pranjal Tiwari’s vocals are one of the most distinct traits in the band’s bizarre and fucked up sense of humor. They range from pompous and almost operatic Tibetan-like chants to twisted and evil screeches. His style is all over the place and the drummer’s vocals often change on a dime, first chanting marvelous and enveloping melodies to you and then two seconds later vomiting buckets of rotten bile down your ear canals. The band’s style is also grand and timeless. The riffs are smokey and thick and oddly disconnected and fractured. It sounds like Frank Zappa has been called in to re-interpret some Candlemass or Reverend Bizzarre material, or as if Pentagram or Church of Misery are being re-worked to sound like Nomeansno.

It’s seriously absurd shit, and at times trying to define the band puts you to a very hard task. In general though, if you really want to try and grasp the band’s music, jut think of the kings of all things heavy and weird: the Melvins. There is no other easy way to rationally try to comprehend Cardinal Wyrm’s fucked up and twisted brand of weirdness-infested doom without seeing it through the Melvins lens. Much of what has made King Buzzo and Dale Crover famous is in fact also very much present in the music of Cardinal Wyrm: bizarre and unpredictable song structures, irony, loads of weirdness, tons of eclecticism and great musicianship. In general, both bands succeed in doing something not many can pull off: writing complex and epic music without taking themselves seriously, and rather putting their musical personality and vision before everything else, without giving a flying fuck if people get it or not. This is one of the most original-sounding doom albums I have heard all year and I strongly recommend any fan of occult and esoteric doom to check out this band, their bizarre sorcery in crafting heavy riffs is out of this world awesome.