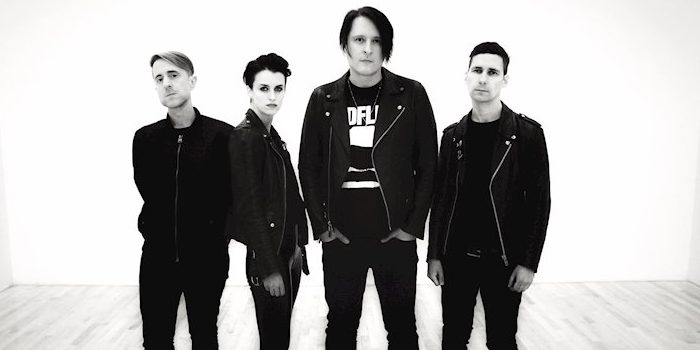 ACTORS of Vancouver, Canada have just released their new LP It Will Come To You on Artoffact Records! This album draws heavy inspiration from the early U2 records Boy, October, and War. They’ve managed to combine this corner of post-punk with some of the most intense darkwave you’ll hear this year. The album has been described as perfected darkwave with light undertones, and I think those light undertones can namely be attributed to their inspiration from early U2 albums. If you were to listen to at least one of those albums and follow it up with It Will Come To You, you will notice the subtle similarities, especially in the vocal harmonization.
“L’appel du Vide” opens the LP with a fun, dancey drum beat and swirling Banshees-esque shoegaze guitar. This was previously released as a single with “Crystal” in July 2017 it and belongs perfectly at the opening of the LP. I get goosebumps hearing the band harmonizing the lyric “into the shadows”. “Slaves” is just as danceable, and has some of my favorite lyrics on the album – “I used to be a slave to your emotions” – how relatable.
The dance element prevails in “Face Meets Glass” although it’s one of the more somber tracks on It Will Come To You. There’s a cameo from a female vocalist about halfway through. Lyrically it’s as depressing as the mood from the guitar evokes. Onto my favorite song on the album “Hit To The Head” which is even catchier than “L’appel du Vide.” Surprisingly this wasn’t released as a single previously, although it certainly sounds like one. It has my favorite synth line I’ve heard so far this year. I would die to hear this live.
“Crosses” and “Bury Me” were on a previously released single in August 2016 so I won’t go into too much detail. “Crosses” is another slow, melancholy track with minimal vocals. “Bury Me” switches the mood back to fast and dancey, with lots of great harmonization and trippy synth style. “Crystal” was previously released as a single with “L’appel du Vide”.This one gets stuck in my head just as often as “Hit To The Head” namely due to the melodic, higher pitched vocals and that guitar which tears right through the song.
“We Don’t Have To Dance” is such a beautiful, lighthearted song which of course sounds like a hit. I can hear the early U2 influence most prominently here. The way the guitar cuts through the rest of the song reminds me of the previous song.
I can’t get enough of “Let It Grow.” The chorus is more simplistic than the rest of the songs on It Will Come To You, but it has picturesque lyrics, fantastic synth lines, and overall it’s truly a romantic dance song.
It Will Come To You finishes out with “Bird In Hand,” a song entirely devoid of lyrics. The best way I can describe this is ACTORS’ version of noise. It remains extremely synth-heavy and foreboding, but there’s a lighter element coming from the synthesizer that feels reassuring. If you listen the album on loop, you’ll see that the ending ties in with the opening of “L’appel du Vide.” Beautiful. How did you get your start back in 2012? Were any of you in music projects beforehand?
Jason: I released the the first single “Post Traumatic Love” with b-side Nightlife in 2012 after about a year of redefining what I wanted as an artist. Adam was with me from the start.
Shannon: I’ve been with the band almost 2 years now. Prior to me joining ACTORS, Jason and I started a darkwave/shoegaze project together called LEATHERS, which also has new material coming out later this year.
Jahmeel: I’ve played in a number of bands over the years. Jason asked me to do some session bass on a record he was producing and we hit it off. Not long after that I joined ACTORS.
What would you say your songs are generally about?
Jason: I like to think that there’s a dark romanticism in my lyrics. Loss, yearning, love, staring into the abyss. You know, all the fun stuff.
I love that you incorporate early U2 sounding vocals into your dark, synthy vibe, it couldn’t sound more flawless. Are all the members big U2 fans?
Jason: I like early U2. I don’t know if I would consider myself a “big” fan. They have just always been a part of the musical landscape.
Shannon: There was a music journalist (Chuck Klosterman?) who proposed that music fans in the 80s could be divided into two species: U2 fans and Depeche Mode fans. As a synth player, I’m a devout Depeche Mode fan, however, I’ve joked that I have a real soft spot for any song that has a similar chord progression to U2’s “New Year’s Day.” It’s such an iconic song. War is a great record.
Jahmeel: The only album I own and have really listened to is War.
You guys manage to sound like you could have existed as a band in the 80s. Who are some of your biggest musical inspirations?
Jason: David Bowie, Echo and the Bunnymen, Joy Division, Killing Joke, are some of the first that come to mind.
Shannon: I’ll add The Cure, The Jesus and Mary Chain, Eurythmics, Bauhaus, Sade.
Jahmeel: Joy Division, Killing Joke, Depeche Mode, Godflesh, Black Sabbath, The Verve. What is the Vancouver postpunk scene like these days? Are there bands you play with regularly?
Jason: I think Vancouver has a healthy post-punk scene. We try to play with different bands all the time. I love Puritans, SPECTRES, Koban, Brutes, and Wire Spine to name a few.
How excited are you for getting to tour so many places this year including WGT? Is it going to be a good culmination of places you’re familiar with and those you’ve never been?
Jason: ACTORS have had lots of online support from other countries. It’s going to be fun to finally play them for the first time!
Shannon: We can’t wait. I’ve travelled a lot but have never been to Germany, so it’ll be a treat to be in Leipzig for WGT. I hope we’ll get a chance to play in Berlin too. We’d love to visit Hansa Studios and soak up all the music related history in that city.
Jahmeel: Really excited. I’m fortunate to have played some of the countries we’re visiting with previous bands, but I look forward to playing them again along with the ones I haven’t.
What sort of things do you guys like to do in your downtime?
Jason: I work as a music producer as well as composing for television and film at my studio Jacknife Sound. I don’t seem to have any downtime, but it’s all music related so I’m happy.
Shannon: We’re fortunate to be immersed in the work we love to do. I’m a full-time graphic artist, and part of my role in ACTORS is to help develop our visual identity—I recently produced the design materials for It Will Come To You and I’m currently directing a music video for our single ‘Slaves’. Beyond that, I sing every day, I paint, and support live music.
Jahmeel: I’m a music junkie so I read a lot of music books, magazines, and websites. I love buying records and generally listening to music constantly.
How long did it take you guys to write and record It Will Come to You?
Jason: It was a culmination of tracks I had been working on so it’s hard to say exactly. Once I knew we were signing on with Artoffact Records I switched into high gear and spent a couple of months finishing the last several songs. What music do you guys usually listen to, or have been listening to lately?
Jason: Beliefs. Godflesh. Exploded View. The Soft Moon. Odonis Odonis.
Shannon: Lately, Boy Harsher, The Horrors, The Human League, and Janet Jackson. I’ve been revisiting some late-career Bowie records like Heathen and Reality too.
Jahmeel: Aosoth, Portal, Katharsis, Beherit, Slowdive.
You guys seem to have a lot of music videos and they’re all so different! Do you have different directors for each one? How many are there in total?
Jason: Most of the videos are done by different directors. As long as the concept makes sense to me thematically I’m open to seeing a directors interpretation of a song. We try to have a video for every song we release. There’s four new ones on the way all by different directors.
If you could tour with any band you haven’t already toured with who would it be?
Jason: I would like to tour with The Horrors. I like their energy.
Shannon: Please tell Robert Smith to give us a call.
Jahmeel: The Horrors or Killing Joke would be pretty cool. 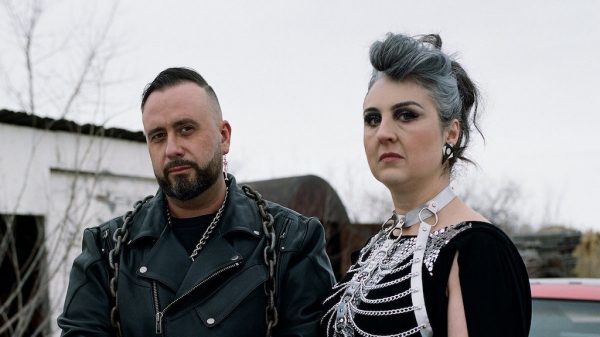 Get your Dystopic Dance on To GHOST TWIN “Become Control”

“When the people rule the world, will we become control?” asks Ghost Twin. This is a question I’ve asked myself many times. It seems...