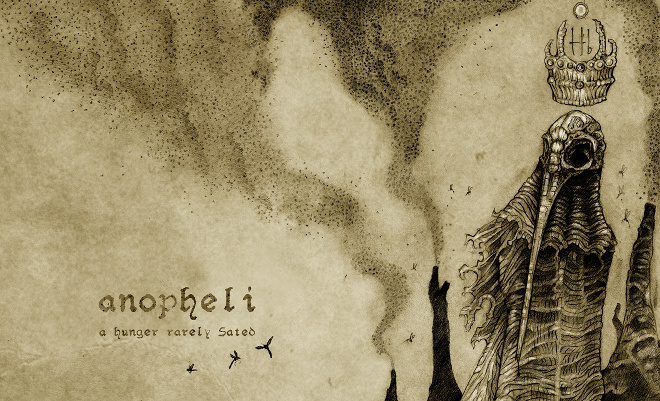 Among the many awesome things that friendship does, it brings together awesome people to make even more awesome fucking records. And this is exactly what happened in the case of Anopheli, where Alex CF (Lightbearer, Fall of Efrafa, Carnist etc) flew to San Francisco from England to record a crust album with his friends Brian, Josh (both also in Monuments Collapse), Jasmine and Nicole. The band set out to create a work that would incorporate the best moments of melodic crust in the vein of Remains of the Day and From Ashes Rise on one side, and the vicious and dirty attack of Spanish crust bands like Madame Germen, Ekkaia, Ictus and Leadershit on the other. The final result is indeed a fine representation of both schools, all in one place…

With the cello being an integral part of every song, the Remains of the Day influences remain always apparent, but the band manages to bust out an even meaner and darker form of melodic emo-crust, something driven by a stronger urgency and a more primordial form of anger. The breakdowns are dominated by soaring and melancholic cello lines and a dual male/female vocal attack which makes the feat just that more interesting and engaging. At the same time, the band never forgets where it comes from, often and predominantly launching into devastating gallops of pissed off and super abrasive, caustic d-beat. If you know the individual backgrounds of the people involved in this band, you will surely know that melody and a strong penchant for groove and epic jams are at the core of their musical personality, so you can definitely expect some pretty epic crust moments to come around from time to time, as you would also find in bands like Tragedy and Morne, but with the introverted and “emotional” aspect of things being the predominant trait in the band’s music.

Overall, this debut release by the San Francisco-by-way-of-London band is solid as fuck, and is a glorious showcase of the best things that have ever happened in the crust genre throughout the years, from it’s more modern and melodic moments to its more brutal and d-beat-infested inclinations. As a final seal of quality of sorts, all you need to know is that A Hunger Rarely Sated is out now on need-no-introductions punk/metal stalwart labels Halo of Flies as tape and Alerta Anti-Fascista as 12″ LP. Get into it!