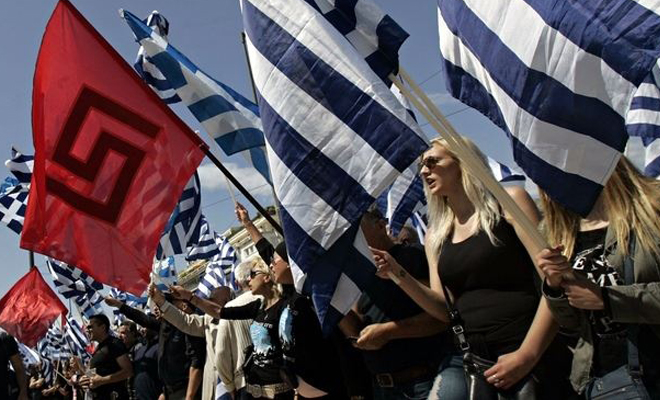 It has been a bad week for democracy in Athens. All around this great Greek city, the politics of hate now lurk. On Friday I got a taste of it in the tiny Italian-style cafe I frequent off Syntagma Square.

It arrived in the form of two middle-aged men, both supporters of the neo-fascist Golden Dawn – and, by their own account, the holders of university degrees, well-travelled and well-informed. Over espressos, they began to engage in an animated discussion about all that is wrong with Greece.

The first, a self-described businessman decked out in designer suit, brogues and silk tie, blamed the country’s economic collapse on malfeasance, corruption and uncontrolled immigration. “The only way to teach our filthy politicians is to bring in Golden Dawn,” he trilled, his eyes locked in a fierce glare. “These gentlemen are patriots, proud Greek nationalists, and they know how to deal with the scum, the foreigners who never pay taxes, who steal our jobs, who have taken over our streets.”

Dismissing charges that Golden Dawn is a criminal gang masquerading as a political group, the second – a self-described government employee – said the far right was the best response yet to the great Jewish conspiracy of an interconnected banking system that has come with globalisation. “Let’s not forget all the faggots and the Jews, the wankers who control the banks, the foreigners who are behind them, who came in and fucked Greece,” he insisted. “The criminals who have governed us, who have robbed us of our future, of our dreams, need a big thwack.”

Last Wednesday Greece got that jolt when Nikos Michaloliakos, Golden Dawn’s imprisoned leader – who stands accused of murder and assault – made his first public appearance in almost nine months. The politics of hate took over Athens as the 58-year-old was hauled before parliament, ahead of a vote to lift his immunity from prosecution, on further charges of illegal weapons possession.

Emboldened by its recent success in European and local elections – in which the party emerged as the country’s third biggest political force, thanks to a softening of image that has attracted ever-growing numbers of the middle class – the extremists drove home the message that they were not only on the rebound but here to stay. And as they ran roughshod through the house of democracy, hurling abuse at other MPs in an unprecedented display of violence and vulgarity, there was no mistaking what Golden Dawn is: a party of neo-Nazi creed determined to overturn the democratic order. For, far from being contrite, the handcuffed Michaloliakos was in unusually aggressive mood, giving Nazi salutes, telling the house speaker to “shut up”, and instructing guards to take their hands off him. Outside, black-shirted Golden Dawn supporters, lined up in military formation in Syntagma Square, gave a hearty rendition of the Nazi Horst Wessel song – albeit with Greek lyrics. All this was a far cry from the party’s recent efforts to distance itself from the thuggery and racist rhetoric from which it was born.

“That day democracy felt a bit weak,” said Pavlos Tzimas, a political commentator who has watched the party’s rise from its fringe group beginnings in the early 1980s. “After all the revelations [about criminal activity], after all the prosecutions against its MPs, it still has the nerve to act in such a way, in scenes of hate that, frankly, I cannot recall ever being seen inside the parliament,” he sighed. “Golden Dawn is not a passing phase, it will not disappear with the end of the crisis, it feels untouchable, it fears nothing, and what we saw this week is its real face. It is not like other extremist parties in Europe. It is a true neo-Nazi force whose aim is to use democracy to destroy democracy.”

The crackdown against Golden Dawn – triggered by the killing of an anti-fascist rapper at the hands of a self-confessed party cadre last September – was meant not only to bring offenders to justice but reverse the group’s seemingly unstoppable ascent. At first the round-up of party leaders seemed to dent the ultranationalists’ popularity. For the first time since June 2012, when it was catapulted into parliament with 6.9% of the vote and 18 deputies, its ratings dipped. But in an alarming display of rehabilitation, the neo-fascists won 9.4% of the vote in the European elections on 25 May and, in the race for the Athens mayoralty on 18 May, were backed by 16.1% of the electorate even though its candidate, Ilias Kasidiaris, sports a swastika tattoo and assaulted two leftwing female politicians during a live TV show. In both cases the results were the most shocking endorsement yet of the anti-liberal party. What worries Tzimas most is not just the coarsening of public debate but the “banalisation of violence” that is now stalking Greece. “We seem to be getting used to it, and that frightens me,” he said.

In an explosive political climate, where popular rage is at boiling point nearly five years into the country’s worst crisis in living memory, the politics of hate so embodied by Golden Dawn is becoming increasingly pervasive. “Who cares if six million Jews were exterminated?” asked the businessman back at the cafe, in a shocking endorsement of that reality. “I don’t care if they were turned into soap. What I care about is the salary I have lost, the never-ending taxes I am forced to pay, the criminals who rule this country, the anger I carry inside.”

In a global survey released by the Anti-Defamation League last month, Greece at 69% was found to be the most antisemitic country in Europe.

“This is the deeper explanation for the growth of Golden Dawn,” says Dimitris Psarras, author of The Black Bible of Golden Dawn, which chronicles the party’s meteoric rise. “Greece has deep cultural differences with the rest of Europe. After the second world war, it did not undergo real democratisation because we had civil war [1946-49]. And after that the deep state was never really purged [of extreme rightwing elements]. Even when it was a small group, Golden Dawn had ties to the Greek state.”

The party’s fielding of two retired generals on its European election ticket was testimony to those ties. With three Golden Dawn MEPs now about to take seats in Brussels, the burning question for many is how to confront the extremists. Following the poll, even France’s Front National leader, Marine Le Pen, ruled out relations with them.

The independent MP and prominent novelist Petros Tatsopoulos, himself the focus of much of the fascists’ fury in parliament last week, thinks there is no other way but to ban Golden Dawn. “It was a huge, historic mistake on the part of our parliament not to de-legitimise Golden Dawn,” said Tatsopoulos, until recently an MP with the radical left. “It should have been banned, not for its Nazi ideology but because it is a paramilitary force … who, if it could, would press ahead with a coup d’état,” he told the Observer. “We know how these people work. The fascist poison that Greece is experiencing is not just political, it is poisoning every aspect of social life, the way people think, the way they behave. I honestly believe that the 500,000 Greeks who voted for Golden Dawn were very conscious of what they were doing.”

Was democracy in its own birthplace now under threat? “Golden Dawn is on stand-by,” he averred. “I don’t know how long it will take, but if this voluntary blindness continues, if the crisis goes on, it will be a real threat to democracy in the near future.”