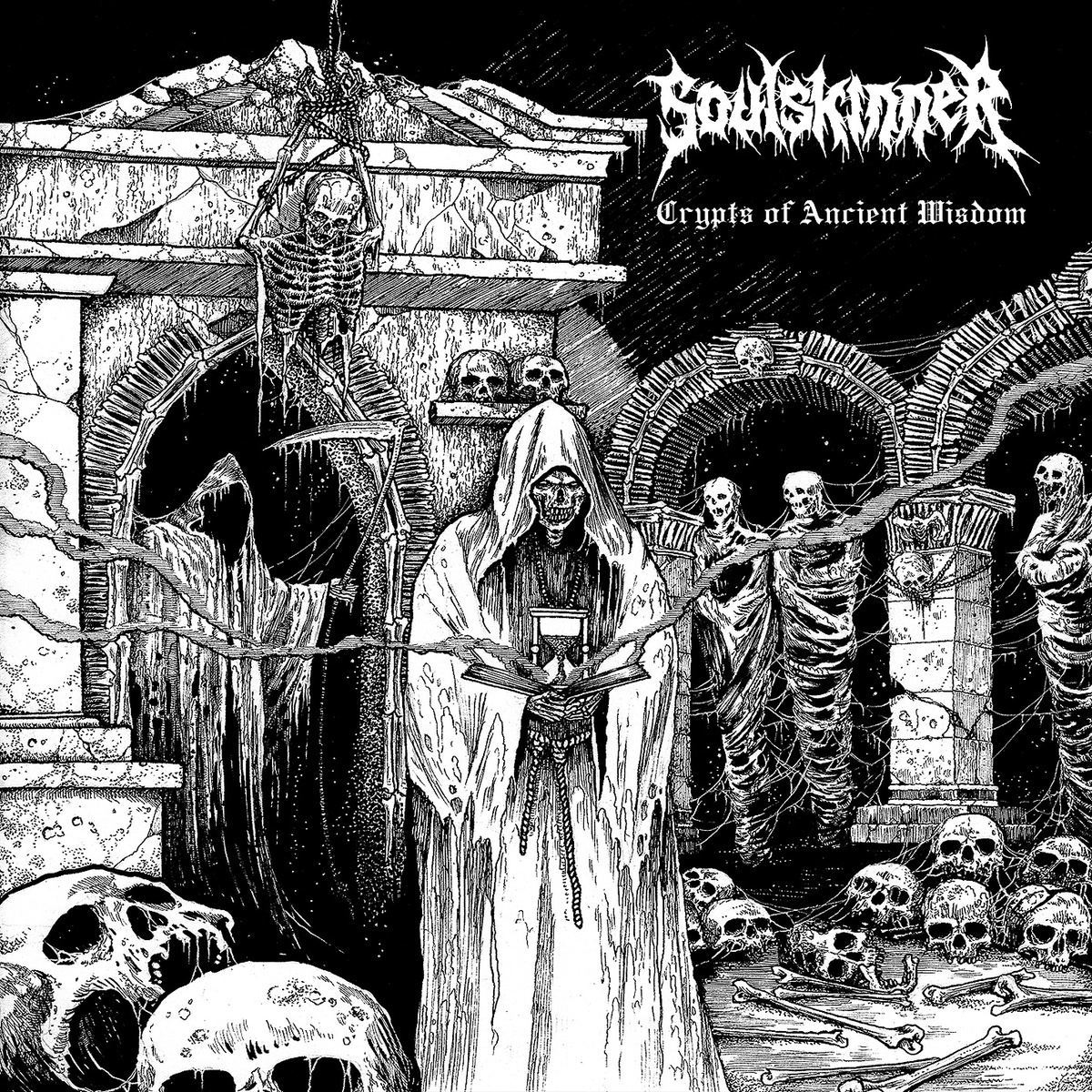 Starting off their career in the late ’90s as Terra Tenebrae, Soulskinner are veterans in the field, and legends in the Greek death metal scene, featuring original Thou Art Lord vocalist Gothmog, and current Thou Art Lord guitarist/keyboardist Bill Zobolas. The release of Subconscious back in 1999 (under their previous name) signaled the beginning of their extreme sonic visions. The band changed their name in 2000, releasing Bleeding The Grotesque in 2003 and Non Stop Killing in 2007. A split with Vorkreist and a four way split with fellow Greek bands Kawir, Nergal and Embrace of Thorns led to their third album Crypts of Ancient Wisdom, which seems to find them at their best.

When it comes to death metal, it really does not get much better than what Soulskinner have in store for us on their latest record, Crypts of Ancient Wisdom. The vibe that they awaken is astonishing, taking the best the genre had to offer from the late ’80s and early ’90s but with a modern twist to it. Soulskinner can hit you quite easily with their all-guns-blazing tactic, as they do with moments of “The Captive Trojan Maiden” and the sudden outbreaks of “Life A Bane.” There are times when a more thrashy approach is undertaken, resulting in moments such as “Thou Shalt Die,” or when a more primitive proto-death metal strategy is followed, bringing songs such as “The Furies’ Hymn.” But where they really shine is when their mid-tempo groove comes to the surface. In both the aforementioned songs, they move quite easily between tempos, making sure they retain your attention as the tracks progress. The vibe that is awakened in “Deadland Pt. 2” and the militaristic quality of “Deadland Pt. 1” unveil that side of the band, with moments even bringing them close to a Bolt Thrower-esque characteristic sound, as it happens in “Our Greatest Curse.” They can even slow it down in terms of speed with songs such as “Death At Last” creating a torturous offering in the process before they allow the sickening groove to come back in.

As a result, Soulskinner are able to maximize the weight of their songs, aided mainly by their mid-tempo parts. “Life A Bane” and “Our Greatest Curse” are heavy as shit, with breakdowns in songs such as “The Price of War” being able to bring down walls. The drums help make the process more overwhelming with some very creative ideas and fluid playing. From the insane blasts coming out of nowhere in “Life A Bane” and the frantic changes in “The Price of War” they dictate the rhythm of the album, alongside the huge-sounding bass. In “The Furies’ Hymn” they give the raw aura to the song, while their frenzied approach in “Thou Shalt Die” really elevates the track to another level.

Similarly captivating is the lead work in the album. The hellish melodies in “The Captive Trojan Maiden” bring the perspective that Soulskinner will follow into light. On “Our Greatest Curse” the lead work shines, giving a more melodic input to the music with its free flowing quality, while the insane sounding parts in “The Furies’ Hymn” seem to be coming from an all different sonic dimension. Even though the guitar seems to be leaning towards the more melodic side, there are instances when it is just unforgiving. The parts in “Thou Shalt Die” bring to mind a Morbid Angel mentality, with the dissonance at a rise. That becomes apparent in multiple parts of the album, with the most exciting ones being the agonising leads in “Death At Last” and the insane solo in “Why Shrink From Death.” Consider at the same time the deep growls of Gothmog laying waste in “The Price Of War,” “Deadland Pt. 1” and especially in “Deadland Pt. 2” with that in your face approach to them, and that is just a stunning combination.

Apart from all that, there are a couple of interesting twists that Soulskinner send our way. The intro and outro to the album are quite unexpected, starting off with the acoustic guitar melodic bits, before the death metal brutality comes in. In the case of the outro, the band even includes a cool sample of machinery at work, just to create an even colder vibe for the end of their record. That is not the only instance, samples are used, since that also happens in “The Price of War” with the gunshots being a constant warning as the song unfolds. But, the most intriguing moment would have to be “Why Shrink From Death” as Soulskinner unfold the song with the use of keyboards to lay down the foundations of the track. The result is a very menacing and dark part, with the keys continuing even after all the other instruments and vocals have joined in, making it one of the highlights of the album.

In terms of death metal, Soulskinner really deliver with their latest album. Crypts of Ancient Wisdom is exactly as it should be: brutal at its core, featuring both melodic and dissonant parts and a sickening groove.

Veterans of the Greek death metal scene, Soulskinner released their third full-length album Crypts of Ancient Wisdom last October. In this interview, I am...