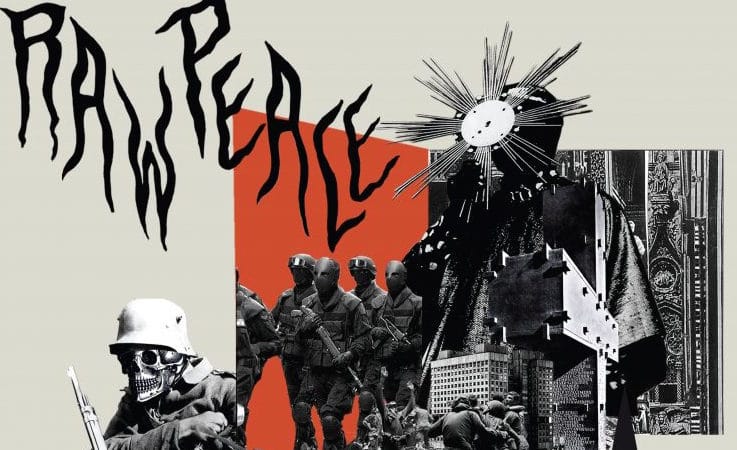 In the beginning, there was Larm. At least in Europe and according to Raw Peace, Larm were pretty much responsible for starting it all. In this case, all, is a truly politicized punk scene, something that Raw Peace are definitely part of, even if they’re not the type of guys to be pissed off all the time. You wouldn’t know it, listening to their first LP: Total Death.
They sound angry, crazy and full on honest, which is even more important. Taking their pedigree of members of Reproach, Blind To Faith and Agathocles and their positioning somewhere between Scandicrust, Japcore (G.I.S.M.) and new hardcore, you’re in for a true punk boner drenched in mad blasts of reverb. Particularly after reading our interview.

Contrary to southern European countries, north of Europe is mostly in a more comfortable economic position. However, historically it has bread more politically charged bands. Why do you think that happens?
Because of Lärm.

War seems to be an ever-present issue in your lyrics. Is it a constant in everyday life, even if it doesn’t haunt occidental citizens directly?
I wanted to write war-themed lyrics for a while and had some laying around even before we started playing together. I definitely don’t live my daily live shaking in fear of a (or better yet, the) coming war, but I do realize that this whole civilization is a thin layer and gets scratched off when things escalate. Violence and war is something that’s embedded in the nature of humanity and it’s fucked up and fascinating. Just 78 years ago Europe was burning because of World War II, the Rwanda genocide was a mere 25 years ago, Cambodia, Vietnam, the first Gulf war… all that is very very recent history.. not to mention all the wars going on in the Middle East as we speak and the cowardice terror attacks in Europe of the past few years. People that think it could never happen “here” or it could never happen again have no idea and should start paying attention, your cities could be in ruins before you know it.

Punk usually points out problems. But is there a solution?
Is punk even meant to solve anything? Punk to me is my way of self-expression, venting my frustrations and having a good time with my friends.

How do you position yourselves, politically?
Not anywhere. Is punk in a better or worst shape than it was in the 20th century?
Neither, punk is what it is and it’s what you make of it. There are more bands now than ever before doing awesome stuff and I’m not the type of person that revels in nostalgia.

Besides Scandinavian Crust and Jap-Core, what influences you?
We also got a UK punk influence, Disorder, Rudimentary Peni, Chaos UK,.. My man Moshrat reviewed our LP and he hears some Nuclear Assault in it sound wise, which is a huge compliment as I love my dose of thrash metal!

You guys sound really angry. What pisses you off more than anything?
Organized religions, racism, animal abuse, power abuse, just idiots in general… on that subject; I’m not pissed off all the time and I enjoy my life a lot because I try to steer away from negative shit and do things that I love, such as making music and hanging out with awesome people.

What bands are you into, these days?
Belgium and the Netherlands is exploding with great bands lately, so I’ve been listening -and seeing- lots of inspiring stuff; Pressure Pact, Hetze, Lifespite, Slavemaker, Chain Reaction, Haemers, Permanent Debt, Gewoon Fucking Raggen, Travolta, B.Polar & The Space Fuckers, Diss Guy, Hard Shoulder, Darmstadt,… and more to come! Besides all that I’ve been listening to Warzone, Slayer, Vile Gash, Muro, Antiseen, Tragedy, Aus Rotten, Ill Bill and No Comment the past few weeks.